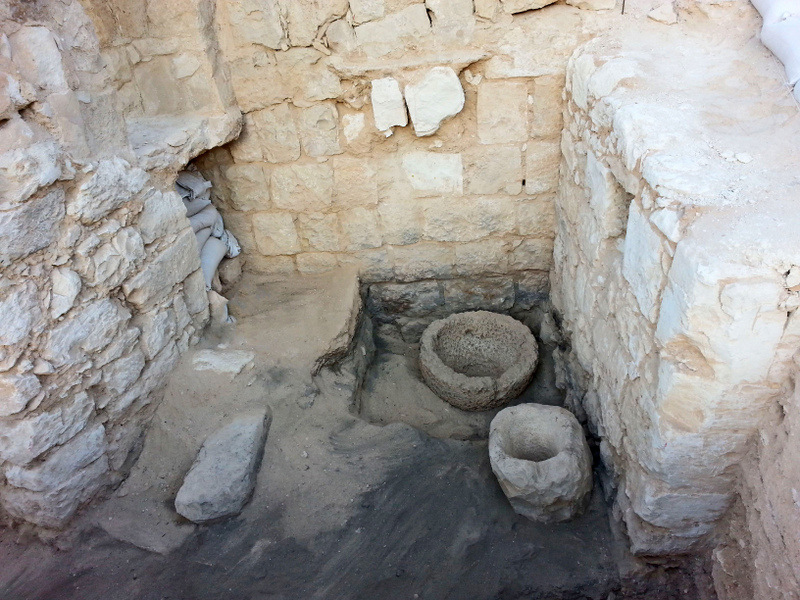 A Byzantine livestock stable was exposed in the Avdat National Park

In the Negev Desert

In a joint archaeological excavation conducted in Israel, a 1m thick layer was found that leaves no room for doubt that donkeys, sheep and goats were there in antiquity.

A structure that was apparently used as a livestock stable in the Byzantine period was recently revealed in an excavation the Israel Antiquities Authority carried out in the Avdat National Park (Negev Desert).

The excavation, with the participation of students from the Har Ha-Negev Field School, was directed by Professor Scott Bucking of DePaul University (USA) and Dr. Tali Erickson-Gini of the Israel Antiquities Authority, with funding provided by a Fulbright scholar grant.

The stable, which was constructed in one of the rock-hewn caves on the mountainside, was used as a service structure by the local residents who were apparently monks. It was divided into a number of stone-built rooms, whose walls were adorned with painted decorations of crosses. Stone basins were also discovered that were probably used for storing food and water for the animals.

According to Professor Scott Bucking of DePaul University in the United States and Dr. Tali Erickson-Gini of the Israel Antiquities Authority, “The identification as a stable was corroborated by an almost 1 m thick layer of organic matter (donkey, sheep and goat manure) on the floor of the building. It seems that the place was destroyed by an earthquake that decimated the city of Avdat in the early seventh century CE”.

Students from the Har Ha-Negev Field School participated in the excavation. They sifted the many hundreds of buckets of organic matter that were excavated in the stable under the guidance of Daniel Fox, an archaeo-botanist on behalf of the Bar Ilan University. They collected seeds and various small organic remains that in the future can shed further light on the use of the building, and other questions, such as what food the local inhabitants consumed and what was the environment in antiquity. The researchers hope that the grape seeds they found, which were well-preserved because of the dry conditions that prevail in the region, will allow them to extract the DNA of the ancient plant and identify the different species that were grown in the area. According to Dr. Erickson-Gini, “The young people did an excellent job. They were explained how an archaeologist works, were given a guided tour of the site and they displayed great interest in the research and the project. We enjoyed working with them, and I know that they also enjoyed themselves”.