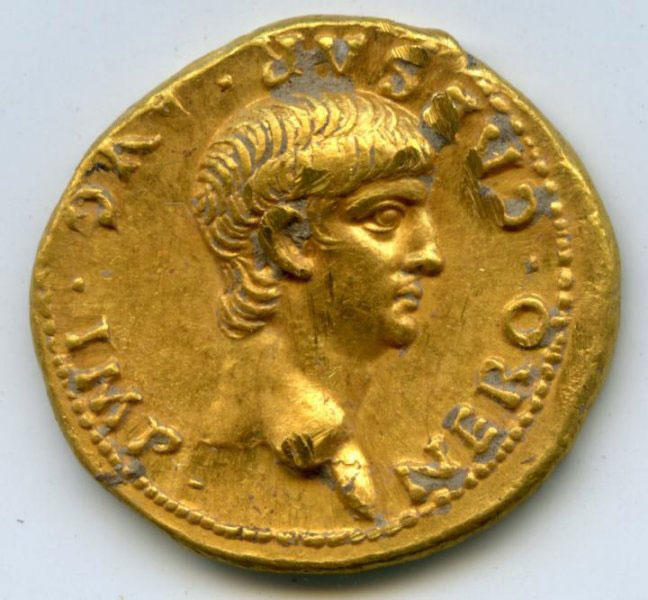 The discovery of a rare gold coin bearing the image of the Roman Emperor Nero at University of North Carolina at Charlotte’s archaeological excavations on Mount Zion in Jerusalem has been announced by the archaeologists in charge of the project Shimon Gibson, James Tabor and Rafael Lewis.

“The coin is exceptional, because this is the first time that a coin of this kind has turned up in Jerusalem in a scientific dig. Coins of this type are usually only found in private collections, where we don’t have clear evidence as to place of origin,” said Gibson, an adjunct professor of religious studies at UNC Charlotte.

The gold coin (aureus) bears the bare-headed portrait of the young Nero as Caesar. The lettering around the edge of the coin reads “NERO CAESAR AVG IMP.” On the reverse of the coin is a depiction of an oak wreath containing the letters “EX S C,” with the surrounding inscription “PONTIF MAX TR P III.” Importantly, these inscriptions help to work out the date when the coin was struck as 56/57 AD. Identification of the coin was made by the historian and numismatist David Jacobson from London.

The coin dates to a little more than a decade before the destruction of Jerusalem by the Romans in 70 AD and was found in rubble material outside the ruins of the first century Jewish villas the team has been excavating. The team has hypothesized that the large houses may have belonged to wealthy members of the priestly caste, and it may have come from one of their stores of wealth.

“The coin probably came from one of the rich 2,000-year old Jewish dwellings which the UNC Charlotte team have been uncovering at the site,” said Gibson. “These belonged to the priestly and aristocratic quarter located in the Upper City of Jerusalem. Finds include the well-preserved rooms of a very large mansion, a Jewish ritual pool (mikveh) and a bathroom, both with their ceilings intact.”

The image of Nero is significant in that it shows the presence of the Roman occupation and provides a clear, late date for the occupation of the residences. There is no historical evidence that Nero ever visited Jerusalem.

Tabor, UNC Charlotte professor of religious studies, pointed out that the coin is dated “to the same year of St. Paul’s last visit to Jerusalem, which resulted in his arrest (on the charge of taking Gentiles into the Temple) and incarceration in Caesarea.”

The Mount Zion archaeological project has brought to light many other significant finds during the 2016 summer season, and work at the site will be resumed next year.