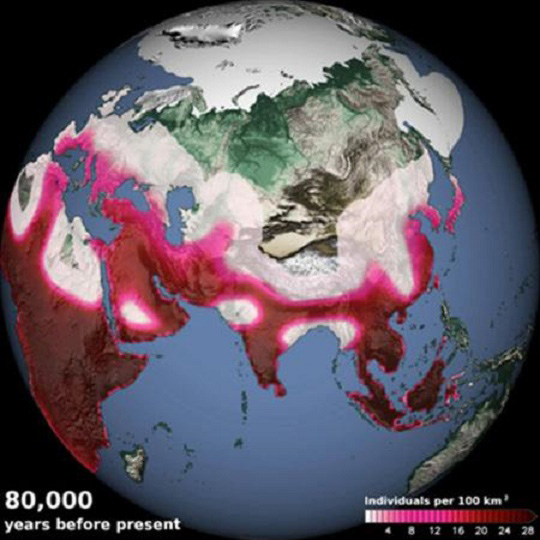 A small group of Homo sapiens left Africa around 100,000 years ago in a series of astronomically-paced slow migration waves and arrived for the first time in southern Europe around 80,000-90,000 years ago, according to a new study published in the journal Nature. These results by a team of researchers from the University of Hawaiʻi at Mānoa challenge prominent anthropological models that assume a single exodus out of Africa around 60,000 years ago.

Climate as a driver of migration

The wobble of Earth’s axis, with a period of about 20,000 years, and the corresponding changes in climate are known to have caused massive shifts in vegetation in tropical and subtropical regions. Such shifts opened up green corridors between Africa, the Sinai and the Arabian Peninsula, enabling some Homo sapiens to leave Northeastern Africa and embark onto their grand journey into Asia, Europe, Australia and eventually into the Americas. Whether climate shifts really influenced the early human migration has been a matter of intense debate.

Researchers from the International Pacific Research Center (IPRC) used one of the first integrated climate-human migration computer models in an attempt to re-create quantitatively the grand journey of Homo sapiens over the past 125,000 years and determine the role of climate in human dispersal. The model simulates ice-ages and abrupt climate change and captures the arrival times of Homo sapiens in the Eastern Mediterranean, Arabian Peninsula, Southern China and Australia in close agreement with paleoclimate reconstructions and fossil and archaeological evidence.

“One of the surprising results of our study is that the scenario that agrees best with all the Asian data is one that also simulates a very early arrival of Homo sapiens in Europe around 80,000-90,000 years ago, pre-dating the oldest fossil evidence by about 45,000 years,” said Axel Timmermann, lead author of the study and professor at the UH Mānoa’s IPRC and Department of Oceanography.

“The green migration gateway that opened up between Africa and Eurasia 110,000–95,000 years ago would have also promoted a low-density migration into Southern Europe and possibly a weak early interbreeding with Neanderthals,” explained Tobias Friedrich, post-doctoral researcher at IPRC and co-author of the study.

This study documents that about every 20,000 years warmer and wetter northern hemisphere tropical summers boosted the migration and exchange between Africa and Eurasia.

“In our model simulation we see a complex pattern of human dispersal out of Africa and back flow into Africa, that challenges the more unidirectional away-from-Africa perspective that is still very prevalent in anthropology and some genetic studies,” said Timmermann.

Previous ice core and marine sediment core studies have found evidence during glacial periods for rapid climate transitions between cold and warm periods on timescales of a human lifetime. The new UH Mānoa study addresses for the first time with a computer model whether these naturally occurring climate shifts influenced global human migration patterns. Comparing simulations of the human migration model with and without these climate fluctuations, the researchers find only regional impacts on simulated human density in areas extending from northern Africa to Europe.

“According to our results, the global-scale migration patterns were not affected by past abrupt climate change events on timescales of decades,” reported Timmermann.

As a next step the team of researchers from the UH Mānoa is planning to include Neanderthals in their computer model and account for food competition, interbreeding and cultural synergy.

NOTES
1. University of Hawaii at Manoa