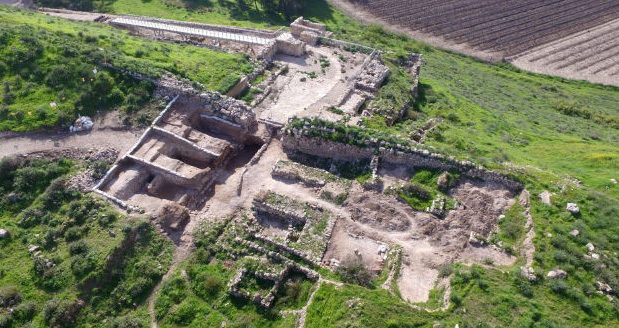 Conducted by the Israel Antiquities Authority

An important and unusual discovery was made in archaeological excavations that were carried out in the Tel Lachish National Park: a gate-shrine from the First Temple period (eighth century BCE) in what archaeologists perceive as compelling evidence of King Hezekiah’s efforts to abolish worship there, as described in the Bible: “He removed the high places, smashed the sacred stones and cut down the Asherah poles…” (II Kings 18:4).

The archaeological excavation was conducted in January–March by the Israel Antiquities Authority. The northern part of the gate was uncovered decades ago by a British expedition and an expedition of the Tel Aviv University, and the current excavation was engaged in completely exposing the gate. The gate that was revealed in the excavation is the largest one known in the country from the First Temple period.

According to Sa’ar Ganor, excavation director on behalf of the Israel Antiquities Authority, “The size of the gate is consistent with the historical and archaeological knowledge we possess, whereby Lachish was a major city and the most important one after Jerusalem”. According to the biblical narrative, the cities’ gates were the place where ‘everything took place’: the city elders, judges, governors, kings and officials – everyone would sit on benches in the city gate. These benches were found in our excavation”.

The Lachish city gate (24.50×24.50m), which is now completely exposed and preserved to a height of 4 m, consists of six chambers, three on either side, and the city’s main street that passed between them. Artifacts discovered in its rooms indicate how they were used in the eighth century BCE: in the first chamber were benches with armrests, at the foot of which were numerous finds including jars, a large number of scoops for loading grain and stamped jar handles that bear LMLK seal with an inscription meaning “belonging to the king”. Two of the handles have the seal impression “lmlk hbrn” (belonging to the king of Hebron). The word “lmlk” is written on one of the handles together with a depiction of a four-winged beetle (scarab), and another impression bears the name “lnhm avadi”, who was probably a senior official during the reign of King Hezekiah. It seems that these jars were related to the military and administrative preparations of the Kingdom of Judah in the war against Sennacherib, king of Assyria, in the late eighth century BCE.

The continuation of the building is the gate-shrine whose walls were treated with white plaster. According to Ganor, “Steps to the gate-shrine in the form of a staircase ascended to a large room where there was a bench upon which offerings were placed. An opening was exposed in the corner of the room that led to the holy of holies; to our great excitement, we found two four-horned altars and scores of ceramic finds consisting of lamps, bowls and stands in this room. It is most interesting that the horns on the altar were intentionally truncated! That is probably evidence of the religious reform attributed to King Hezekiah, whereby religious worship was centralized in Jerusalem and the cultic high places that were built outside the capital were destroyed: “He removed the high places, smashed the sacred stones and cut down the Asherah poles…” (II Kings 18:4).

Besides cutting the horns on the altar, in order to further intensify the abolition of worship in the gate-shrine, a toilet was installed in the holy of holies as the ultimate desecration of that place. A stone fashioned in the shape of a chair with a hole in its center was found in the corner of the room. Stones of this type have been identified in archaeological research as toilets. Evidence of abolishing cultic locations by installing a toilet in them is known in the Bible, as illustrated in the case of Jehu destroying the cult of Baal in Samaria. This is the first time that an archaeological find confirms this phenomenon. Laboratory tests we conducted in the spot where the stone toilet was placed suggest it was never used. Hence, we can conclude that the placement of the toilet had been symbolic, after which the holy of holies was sealed until the site was destroyed.

According to the Minister of Jerusalem and Heritage and Environmental Protection, MK Ze’ev Elkin, “The fascinating new discovery at Tel Lachish is a typical example whereby excavations and further research of heritage sites show us time and time again how biblical tales that are known to us become historical and archaeological stories. This discovery, is an illuminating example of the verse that described King Hezekiah: “He removed the high places, smashed the sacred stones and cut down the Asherah poles…” (II Kings 18:4). Before our very eyes these new finds become the biblical verses themselves and speak in their voice. We in the Ministry of Jerusalem and Heritage will continue to lead the effort whereby as many Israelis as possible will be exposed to the enthralling experience of ancient stones that speak to us of the Bible in their own unique voice”.

The gate at Tel Lachish was destroyed by Sennacherib, king of Assyria, in 701 BCE. The excavation revealed destruction layers in the wake of the defeat, including arrowheads and sling stones, indicative of the hand-to-hand combat that occurred in the city’s gatehouse. Evidence of Sennacherib’s military campaign in Judah is known from the archaeological record, the Bible (II Kings 18 and II Chronicles 32), and the Lachish wall reliefs from Sennacherib’s palace in Nineveh, depicting the story of the city’s conquest.

At this time the gate is temporarily covered for conservation purposes and cannot be seen. The Nature and Parks Authority, in cooperation with the Israel Antiquities Authority, is currently engaged in the continued development and conservation of the site in preparation of opening it to visitors.