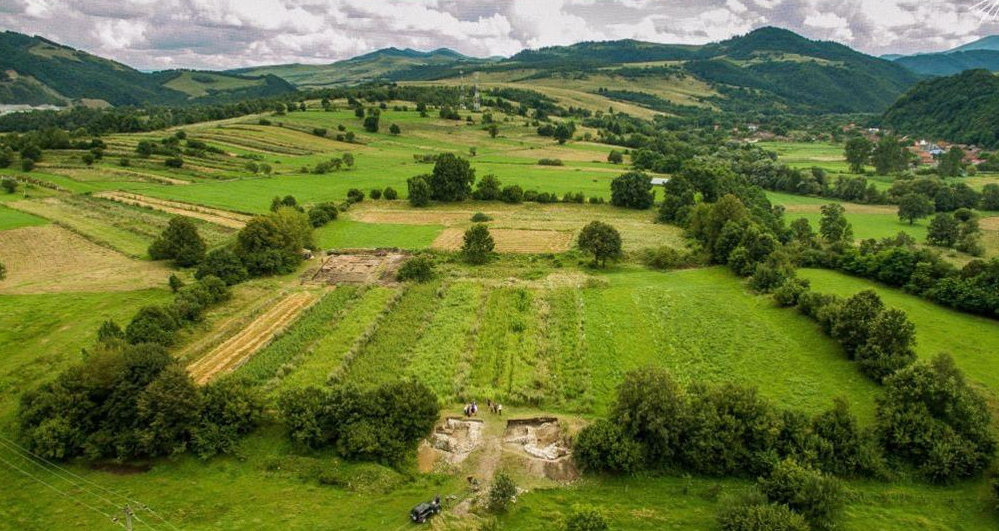 Poles on the border of the Roman Empire

A poorly surveyed part of the fortified border of the Roman Empire, present in today’s Romania, is being studied by a team of archaeologists from Toruń. This year they discovered a previously unknown limes post and recreated the recipe of the ancient mortar.

The last in Europe not fully surveyed section of the Roman Empire limes is preserved in the north-western Romania. Hundreds klm long fortifications were supposed to protect the empire against the raids of the barbarians in the period from c. 1st to the 4th century.

The newly discovered outpost was directly incorporated into the limes structure. It was on the shortest route from the Roman province of Dacia Porolissensis leading west toward the ancient Aquincum, today’s Budapest. Originally it was a stone structure measuring 50×50 m. With the passage of time, however, it was severely damaged by a nearby quarry.

The Toruń team has been studying the limes in the area for three years. “The greatest success is capturing the network of Roman settlements. We know the main camp, whose garrison manned the smaller fort and outposts in the surrounding mountains. Now we are searching for the civil settlement and road infrastructure – in the spring we will use a ground penetrating radar,” explained Dr Jacek Rakoczy from the School of Ancient Archaeology, Nicolaus Copernicus University in Toruń, who is heading the project. Research is conducted in collaboration with Dr. Felix Marcu from the National Museum of Transylvanian History in Cluj-Napoca.

The newly discovered outpost is located just 4 km from Resculum, a Roman camp, where larger legion units were stationed. The soldiers from the fort manned the nearby fortifications of the limes and ventured beyond its borders.

The fort in Resculum was built in the 1st decade of the 2nd century and remained in use until the second half of 3rd century.

“This season, we were able to unearth another part of the praetorium, the seat of the camp command. It proved to be larger than we thought last year at the time of its discovery. We already know the ground plan of the entire east wing,” reported Dr. Rakoczy.

During excavations, archaeologists unveiled a room with an hypocaust. “There could be more such rooms (…) because we found well-preserved remains of collapsed walls lying on the floors. Practically, we can measure the thickness of the walls and trace the stages of internal construction of the building,” said Dr. Rakoczy said. Archaeologists also found well-preserved plaster and are able to reconstruct the technique of erecting such buildings.

Conservators from the Institute of Archaeology of the Nicolaus Copernicus University, who worked in Resculum under the supervision of Dr. Marek Kołyszka, looked at the composition of the mortar. They performed chemical analysis and recreated the composition. To this end, scientists also searched for mortar ingredients that naturally occur in the vicinity of the camp.

“We have identified river sand used by the Romans, which, in the right proportions, together with water and slaked lime formed mortar,” said Dr. Rakoczy. The scientist suggested that the Romans could have been using additional ingredients to accelerate the rate of mortar setting and construction process. “If there were such ingredients, for now they remain a mystery to us,” he said.

This year archaeologists also investigated the main, north gate of the fort. “Interestingly, it was rebuilt several times, and eventually even walled, perhaps as a result of structural failure of one of its towers or war damage,” said the archaeologist.

Its design was symmetrical. It had a single entrance and two towers on both sides. Towers from the outside had the form of a semicircle, bow facing the foreground of the fort. The gate was built of stone, like most structures in this fort. According to archaeologists, the gate towers probably had three storeys, reaching almost 9m.

During this year’s research, archaeologists also made laser documentation of their findings.

“At such large sites digital documentation methods are already a standard that enables the acceleration of work. The advantage of this method is also huge accuracy and the ability to combine data from different seasons, so that we gain a complete picture of the site,” concluded Dr. Rakoczy.