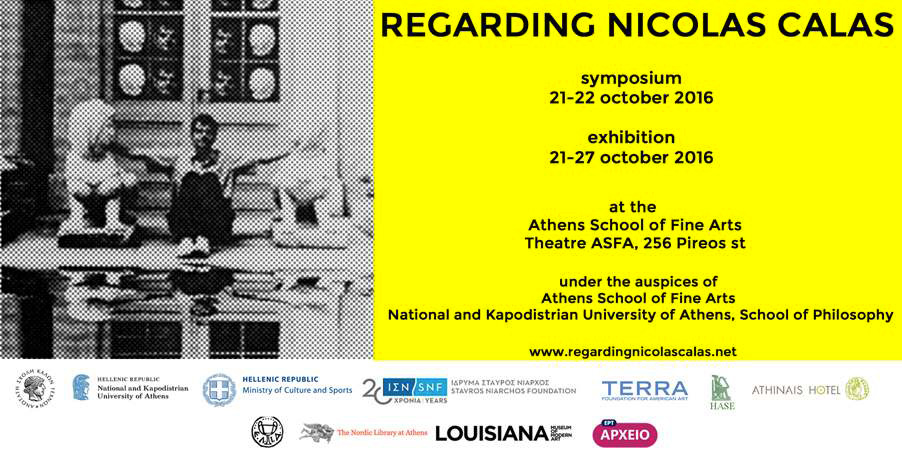 An international symposium and an exhibition about Nicolas Calas will take place at the Athens School of Fine Arts.

Poet, critic, curator, and art historian, Nicolas Calas (Lausanne, 1907-New York, 1988) had an active presence in interwar Greek modernism and was hailed by André Breton as a leading theoretician of Surrealism in the wake of the publication of his Foyers dʼIncendie in Paris in 1938. Instrumental in the dissemination of Surrealism in the New York avant-garde in the 1940s, Calas wrote poetry, polemics, erudite criticism and treatises on diverse subjects ranging from Surrealist art, primitive culture, the Baroque, Pop Art and the heretic idiom of Hieronymus Bosch. Alongside his extensive work over the years, Calas also formed strong friendships and collaborations with important figures of his time, such as André Breton, Max Ernst, Peggy Guggenheim, William Carlos Williams, Barnett Newman, Margaret Mead, and later the Beats and the poets of the West Coast scene. He taught for a number of years at Fairleigh Dickinson University in New Jersey and other educational institutions. From Athens to New York, Calasʼs life and work span the troubled alliance between the artistic avant-gardes and marxist politics in the 1930s, Surrealismʼs esoteric turn in the 1940s, and the emergence of New York as an important cultural centre in the post-war period.

Regarding Nicolas Calas comprises a symposium, a workshop and an exhibition that aim to reveal the intersections of Calasʼs art criticism, poetry, theoretical writings, and his curatorial activities. The planned activities are geared towards presenting and fostering new research on Calasʼs extensive oeuvre and reveal his affiliation with other artists and critics.

The symposium is a platform for scholars currently researching Calasʼs work and related areas. There will also be sessions centred on oral histories about Calasʼs trajectories and collaborations. The symposium is intended to reflect upon Calasʼs own interdisciplinary output, and encourage dialogues between critics, poets, practicing artists, and scholars from diverse fields spanning art history and theory, politics, history, and literary studies.

The exhibition will present artworks and installations by contemporary artists. Based on primary research in the Elena and Nicolas Calas archive, the artists probe the archive and through mixed forms and media attempt to locate and reactivate the timeliness and relevance of Calasʼs concerns and critical idiom. The works will be presented in dialogue with some of the archival material that was the point of departure for the artistsʼs works. The archival material in the exhibition will be presented with the kind permission of the Nordic Library Athens, the Hellenic Literary and Historical Archive, the Cultural Foundation of the National Bank of Greece (ELIA-MIET) and the Archives of the Hellenic Broadcast Corporation (ERT-Archives).

As part of the planned events workshops took place on 17 and 18 June 2016 at the Athens School of Fine Arts. The speakers at the workshops were: Vivi Chatzigeorgiou and Mathilde Pyrli (Hellenic Literary and Historical Archive), Irini Marinaki (art historian), Spillios Argyropoulos (poet/psychiatrist) and Kyrillos Sarris (oncologist/artist).

Tereza Papamichali, artist, Phd candidate at the Academy of Fine Arts in Warsaw

In collaboration with Vassilis Vlastaras (Athens School of Fine Arts)