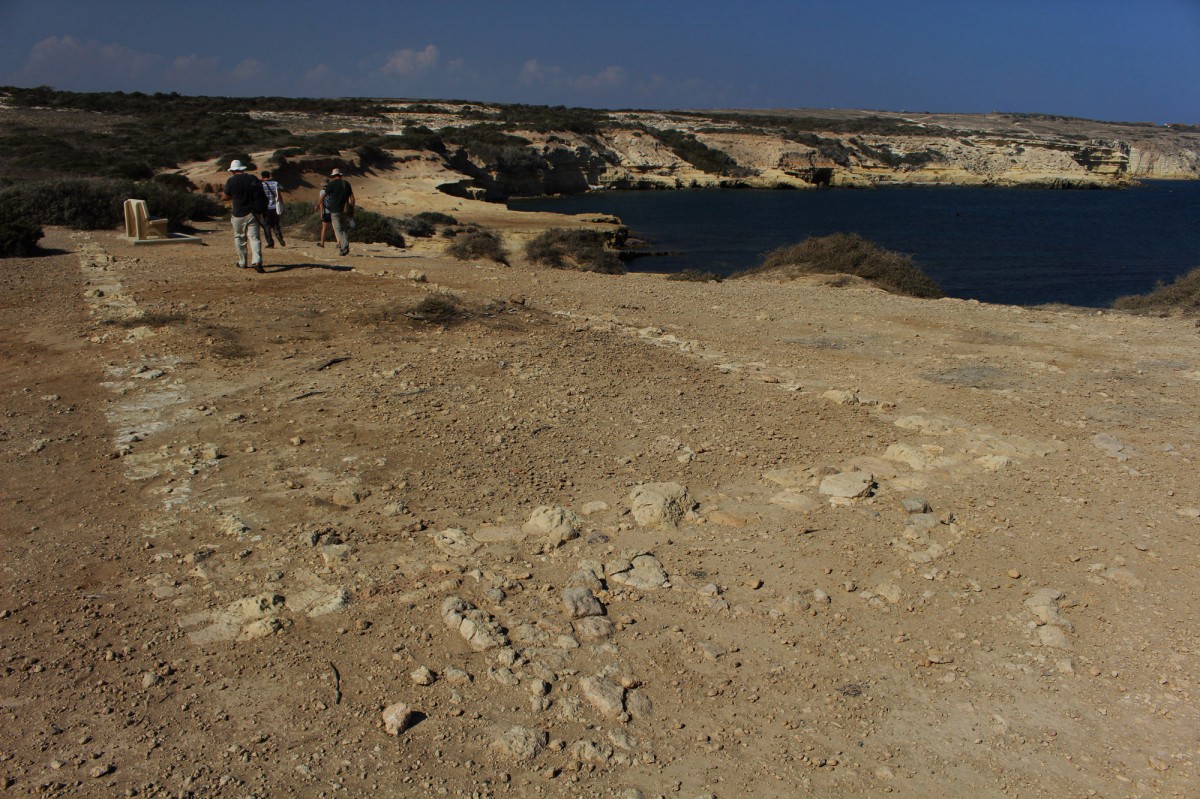 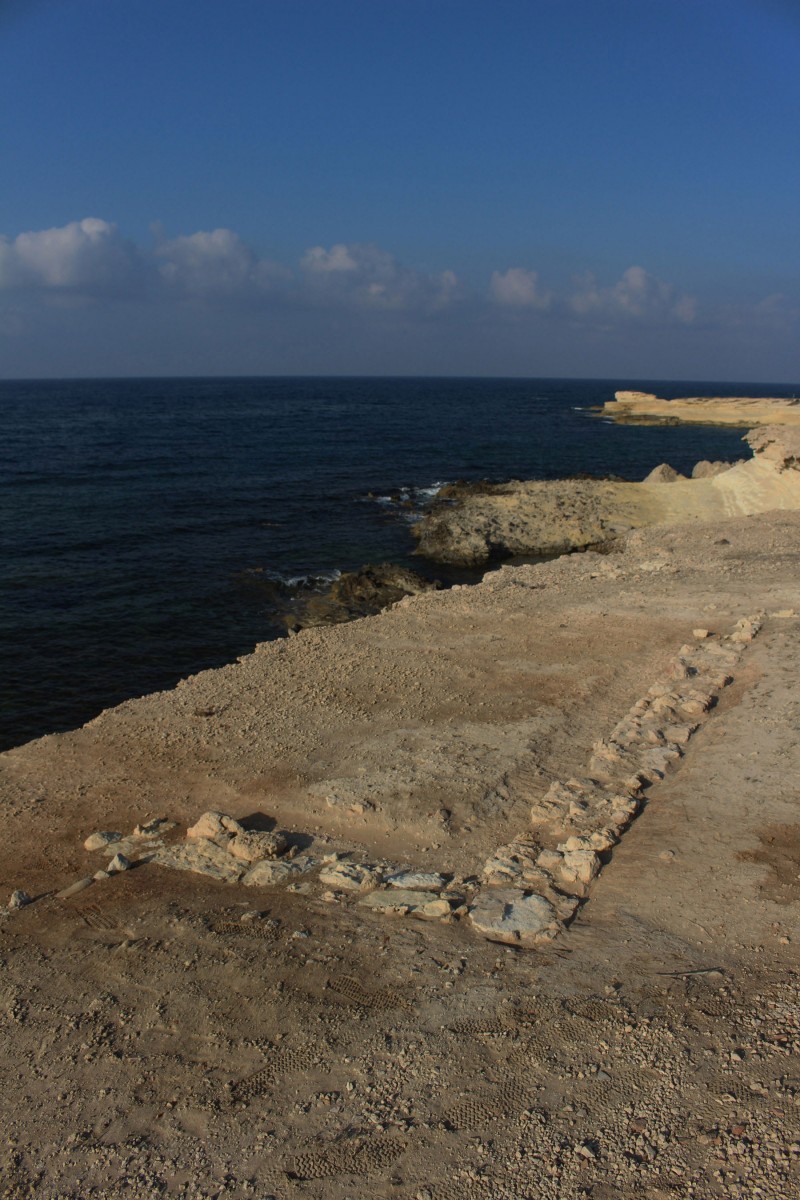 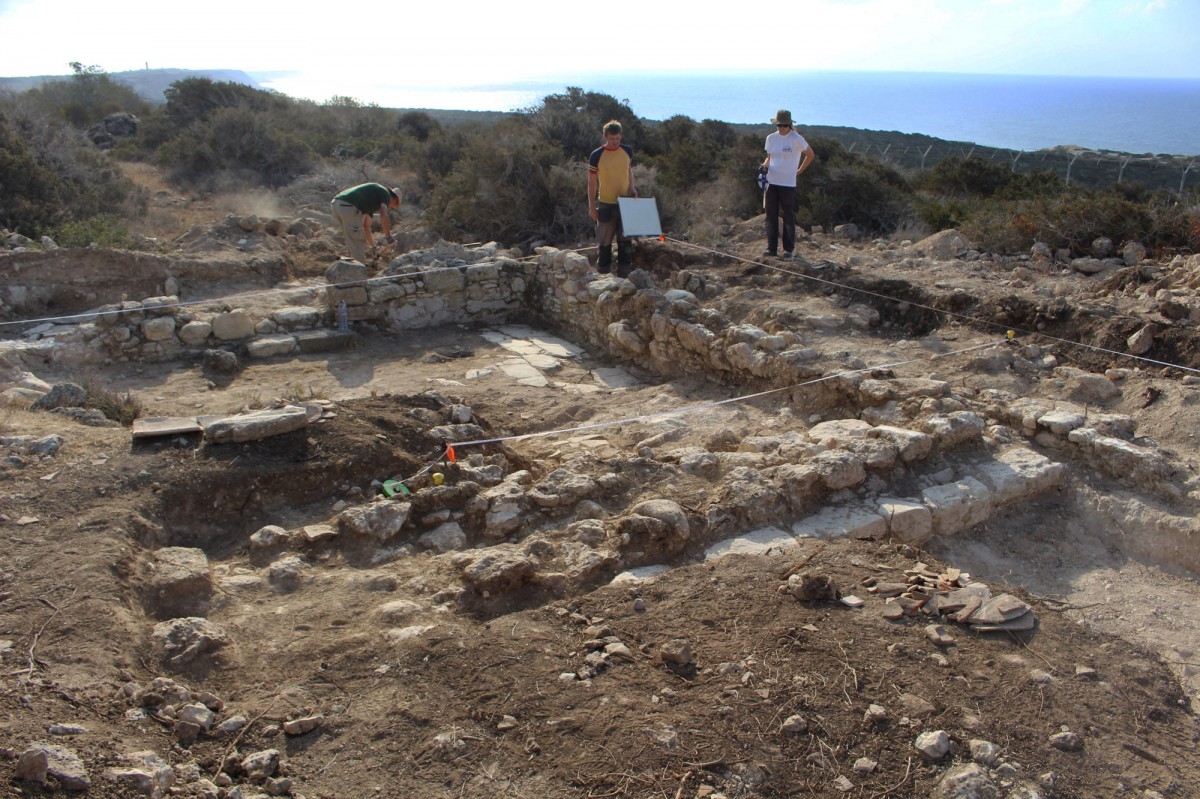 Results of the excavations at Akrotiri-Dreamer’s Bay

The 2016 excavations at Akrotiri-Dreamer’s Bay focused on remains of stone buildings close to the shoreline exposed by winter storms and on a further stone building on the hilltop above, all within the confines of the UK’s RAF Akrotiri airbase. These structures had undergone earlier initial investigations by the University of Buffalo, and were believed to comprise elements of a late Roman/early Byzantine port facility, perhaps serving the major nearby Greco-Roman city of Kourion. Connections between these onshore structures and submerged archaeological remains in the bay to the east, including a masonry breakwater, remain to be investigated. The present programme of work, expected to last for several years, is intended to fully document and record the endangered shoreline structures, to establish their nature and date, and to characterise and date the hilltop remains.

Walls of buildings are visible on the surface close to the water’s edge at various points along the entire c.0.5km of low shoreline at Dreamer’s Bay, on the southern coast of the peninsula which is otherwise entirely comprised of very steep slopes or cliffs. The visible remains and their surroundings were cleaned for examination and selective excavation. The structures were found to be more extensive and more complex than the simple rectangular “warehouses” they were hitherto presumed to be. Some trenches were also excavated to investigate whether there were further buildings back from the shoreline under a deep layer of colluvium. There was no clear indication of further structures inland from the shoreline buildings.

In Area 2 on the southern shoreline, a long rectangular building was found to have internal subdivisions, the westernmost of which proved to preserve a substantial occupational layer. This context produced virtually complete amphorae and other pottery vessels and coins, suggesting a deposit of to the 4th century AD. The tumbled state of its eastern wall suggested possible earthquake damage. It is provisionally hypothesised that this building may have been destroyed in the earthquake which also destroyed Kourion.

Area 4, at the eastern end of the low ground facing into the bay, was another area where stratified deposits within the ancient buildings had been identified at the end of the 2015 excavation. These were a primary target for the 2016 dig. The area opened again revealed a more complex pattern of walls than previously expected, with occupation levels and burnt deposits overlying stone surfaces. Pottery recovered is yet to be analysed but again appears to belong to the later Roman period. Other finds included copper alloy nails thought to come from boats.

Additions made in 2016 to the overall plan of the known shoreline buildings still seem to indicate fairly close adherence to a common orientation hinting at a single planned laying-out of the site. Whether the buildings all belong to a single phase, and whether they were all destroyed at the same time, are questions for further seasons.

The other area investigated on the hill crest c.650m north of the shoreline buildings, at a point offering panoramic views of the coast almost from Cape Gata to the east round to Kourion in the north west, comprised expansion of a small area previously excavated by Buffalo. Here, some decades ago, British soldiers in training had discovered some ancient walls, which Buffalo later showed to be the corner of a masonry-built room or court with wall plaster, stone floor slabs and a doorway. The 2016 excavation (Area 7) revealed that the floor was still covered with broken roofing tile, of apparently late Roman type. Extension of the trench located other walls which appear to indicate two and joining buildings, perhaps representing more than a single phase. Dating evidence is so far sparse, in advance of excavation of the roofing material and underlying deposits projected for 2017. The hill slopes around the immediate area of the building(s) comprise concentrations of large stone rubble, which may indicate a surrounding wall, investigation of which is another planned objective for next year.

Work so far appears to confirm that the archaeological remains at Dreamers Bay generally belong to the late Roman or early Byzantine period. It is not yet clear how they relate to other archaeological sites on the peninsula, such as the great ecclesiastical site at Katalymata ton Plakoton certainly, of the same era.

During the 2016 season, academics from the University of Southampton conducted geological coring in the Akrotiri salt lake. This is projected to be the first stage in a collaborative investigation of the maritime part of the Dreamers Bay area and its wider setting, the Akrotiri landmass, which appears to have turned from an island to a peninsula during early historic times. It is hoped that the cores will provide a new, closer dating for when Akrotiri became joined to Cyprus, fundamental information for understanding the history of human settlement on the peninsula.

The excavations were conducted between 1 and 20 September 2016, at and around the locality of Dreamer’s Bay on the southern shores of the Akrotiri peninsula, Cyprus. The work was conducted by professional staff and students of the University of Leicester, School of Archaeology & Ancient History, under the direction of Dr Simon James and with the approval of the UK Sovereign Base Areas Administration and the Cyprus Department of Antiquities. The project was supported by RAF Akrotiri, the Defence Infrastructure Organisation, and WSBA Archaeological Society. The expedition was conducted in partnership with the Defence Archaeology Group, under whose auspices a number of injured UK service personnel participated in the excavation as part of the Operation Nightingale programme (Exercise ARTEMIS 16, which also involved provision of logistical support to the combined team). This was the University of Leicester’s second season of work at the site, following a short pilot season in September 2015.