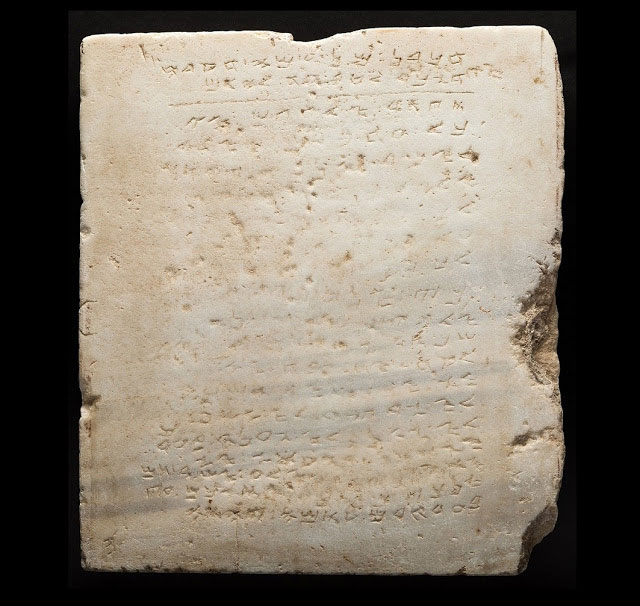 On the 16th November 2016, a marble tablet inscribed with the Ten Commandments will be sold at Heritage Auctions in Dallas. The inscription is in the Samaritan dialect ( a variant of Paleo-Hebrew) and was probably carved between 4th andf 8th centuries AD. It weighs about 200 pounds and is roughly two-by-two feet.

The tablet was discovered in 1913, during the construction works of a railroad near Yavneh. Then it came into the possession of a local Arab man, who installed it in a threshold of his courtyard. There it remained for three decades, according to Rabbi Shaul Deutsch, founder of the Living Torah Museum, in Brooklyn, New York, who obtained it in 2005. In order to export the tablet, the museum had to sign a special agreement with the Israel Antiquities Authority, who allowed the artifact’s export on condition that it be placed on public display “where all can view it and enjoy,” a condition that still pertains.

The commandment “You shall not take the name of God your Lord in vain” is missing. In his 1947 article of the Journal of the Jewish Palestine Exploration Society, Yitzhak Ben-Zvi comments on this as follows: “This commandment was omitted for an unknown reason… If you take “I am the lord” as the first commandment, it would seem there are indeed 10 commandments listed, including the final one to “raise up” (a temple) on Mount Gerizim-the holy mountain of the Samaritans”.