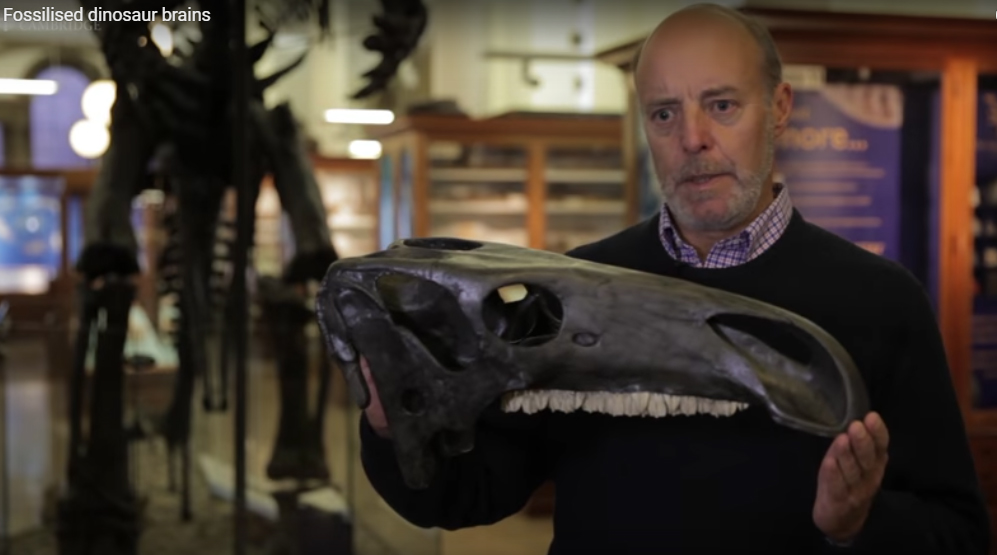 Researchers have identified the first known example of fossilized brain tissue in a dinosaur from Sussex. The tissues resemble those seen in modern crocodiles and birds.

An unassuming brown pebble, found more than a decade ago by a fossil hunter in Sussex, has been confirmed as the first example of fossilised brain tissue from a dinosaur.

The fossil, most likely from a species closely related to Iguanodon, displays distinct similarities to the brains of modern-day crocodiles and birds. Meninges –the tough tissues surrounding the actual brain– as well as tiny capillaries and portions of adjacent cortical tissues have been preserved as mineralised ‘ghosts’.

The results are reported in a Special Publication of the Geological Society of London, published in tribute to Professor Martin Brasier of the University of Oxford, who died in 2014. Brasier and Dr David Norman from the University of Cambridge co-ordinated the research into this particular fossil during the years prior to Brasier’s untimely death in a road traffic accident.

The fossilised brain, found by fossil hunter Jamie Hiscocks near Bexhill in Sussex in 2004, is most likely from a species similar to Iguanodon: a large herbivorous dinosaur that lived during the Early Cretaceous Period, about 133 million years ago.

Finding fossilised soft tissue, especially brain tissue, is very rare, which makes understanding the evolutionary history of such tissue difficult. “The chances of preserving brain tissue are incredibly small, so the discovery of this specimen is astonishing,” said co-author Dr Alex Liu of Cambridge’s Department of Earth Sciences, who was one of Brasier’s PhD students in Oxford at the time that studies of the fossil began.

According to the researchers, the reason this particular piece of brain tissue has been so well-preserved is that the dinosaur’s brain was essentially ‘pickled’ in a highly acidic and low-oxygen body of water –similar to a bog or swamp– shortly after its death. This allowed the soft tissues to become mineralised before they decayed away completely, so that they could be preserved.

“What we think happened is that this particular dinosaur died in or near a body of water, and its head ended up partially buried in the sediment at the bottom,” said Norman. “Since the water had little oxygen and was very acidic, the soft tissues of the brain were likely preserved and cast before the rest of its body was buried in the sediment.”

Working with colleagues from the University of Western Australia, the researchers used scanning electron microscope (SEM) techniques in order to identify the tough membranes, or meninges, that surrounded the brain itself, as well as strands of collagen and blood vessels. Structures that could represent tissues from the brain cortex (its outer layer of neural tissue), interwoven with delicate capillaries, also appear to be present. The structure of the fossilised brain, and in particular that of the meninges, shows similarities with the brains of modern-day descendants of dinosaurs, namely birds and crocodiles.

In typical reptiles, the brain has the shape of a sausage, surrounded by a dense region of blood vessels and thin-walled vascular chambers (sinuses) that serve as a blood drainage system. The brain itself only takes up about half of the space within the cranial cavity.

In contrast, the tissue in the fossilised brain appears to have been pressed directly against the skull, raising the possibility that some dinosaurs had large brains which filled much more of the cranial cavity. However, the researchers caution against drawing any conclusions about the intelligence of dinosaurs from this particular fossil, and say that it is most likely that during death and burial the head of this dinosaur became overturned, so that as the brain decayed, gravity caused it to collapse and become pressed against the bony roof of the cavity.

“As we can’t see the lobes of the brain itself, we can’t say for sure how big this dinosaur’s brain was,” said Norman. “Of course, it’s entirely possible that dinosaurs had bigger brains than we give them credit for, but we can’t tell from this specimen alone. What’s truly remarkable is that conditions were just right in order to allow preservation of the brain tissue – hopefully this is the first of many such discoveries.”

“I have always believed I had something special. I noticed there was something odd about the preservation, and soft tissue preservation did go through my mind. Martin realised its potential significance right at the beginning, but it wasn’t until years later that its true significance came to be realised,” said paper co-author Jamie Hiscocks, the man who discovered the specimen. “In his initial email to me, Martin asked if I’d ever heard of dinosaur brain cells being preserved in the fossil record. I knew exactly what he was getting at. I was amazed to hear this coming from a world renowned expert like him.”

The research was funded in part by the Natural Environment Research Council (NERC) and Christ’s College, Cambridge.