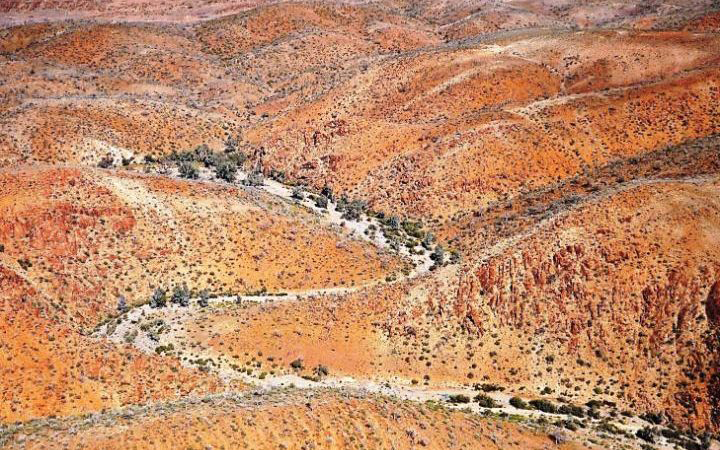 Evidence of use of ochre, bone tools etc.

The chance discovery of a rock shelter in the northern Flinders Ranges shows Aboriginal Australians settled in the arid interior of the country around 49,000 years ago — some 10,000 years earlier than previously thought.

The research – published in the international journal Nature – found the Warratyi Rock Shelter is the oldest evidence of Aboriginal occupation in Australia.

La Trobe’s lead researcher Giles Hamm said he found the site while surveying gorges in the northern Flinders Ranges with a local elder.

“We excavated a small rock shelter site in the Flinders Ranges in an effort to understand the adaptability of human populations in the Australian arid region as well as causes of megafaunal extinctions 40,000-50,000 years ago,” said Mr Hamm.

“The results of our scientific investigations tell us that people not only settled in the arid interior of Australia within a few millennia of entering the continent, but they also developed milestone technologies much earlier than we have previously thought.”

-evidence of the earliest use of ochre in Australia, dating up to 49,000 years ago

-the earliest bone tool in Australia, dated as being around 40,000 years old

-evidence of the earliest use of gypsum as a way of colouring objects, dating up to 40,000 years ago

-the earliest ‘hafted’ tools in Australia, dating up to 38,000 years old, and

-more than 2,000 bone fragments, including one from the juvenile marsupial Diprotodon optatum.

“The Warratyi Rock Shelter has by far the earliest-known evidence of the use of ochre pigment in Australia as well as hafting technology in Australia and South-east Asia,” Mr Hamm said.

“The hafted tools we found date up to 38,000 years in age, which demonstrates the early complexity of Australian Aboriginal people’s knowledge.

“This is an incredible find as, prior to our research, the oldest artefacts of this kind had been dated at around 9-10 thousand years old.”