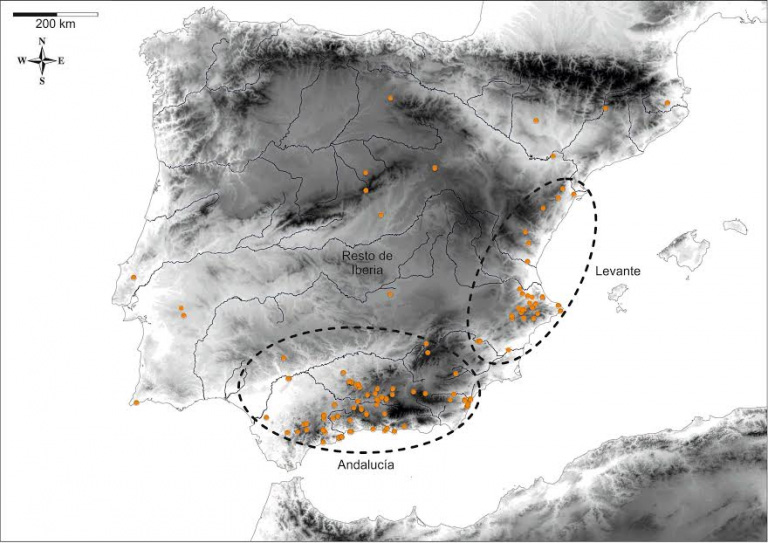 Βased on the study of stone bracelets

A researcher from the University of Granada (UGR) has shed new light on the lifestyle of the first communities in the Early Neolithic (7500-6800 years ago) in the Iberian Peninsula, from the study of stone bracelets.

His pioneering work is the most comprehensive study of these ornaments, and it has served to determine that they were used both by children and adults of both sexes, and they represented a chronocultural indicator of the first Neolithic communities of Iberia.

Francisco Martínez Sevilla, researcher from the department of Prehistory and Archaeology at the University of Granada, has analyzed a total of 2549 objects from 126 sites such as quarries, settlements and ritual places. The absolute dating and studied stratigraphic sequences indicate that said stone bracelets were used between 5500 and 4800 cal BC, with a maximum representation from 5300/5200 cal BC on.

This temporary delimitation responds to a cultural change in the Neolithic populations of southern Iberia: bracelets appeared with the emergence of the Neolithic, consolidation and peak occurs in the Old Neolithic, and their disappearance occurs during the Late Neolithic.

The geographical distribution of the bracelets has helped define two major cultural groups traditionally known as the Andalusian and Valencian Neolithic periods. This distribution and its chronology becomes a first order cultural definer of Early Neolithic societies in the different geographical areas of Iberia. In the same way, their craftsmanship, circulation and use make the bracelets notable elements for determining the socioeconomic evolution of those first neolithic communities.

The use of stone bracelets is one of the most important archaeological phenomena associated with the first neolithic societies in much of the Western Mediterranean region. “In the case of Iberia, the bracelets are distributed mainly by the coastal areas, projecting inward, where the earliest and more important neolithic and cultural development in the early stages of agriculture and stock breeding occurs”, Martínez Sevilla explains.

Typological and typographic studies allowed the UGR researcher to establish, in essence, four types of bracelets: narrow, medium, wide, and decorated with parallel lines. Within each type, three groups have been defined according to the size of its inner diameter, which would be related to the individuals who used them.

Narrow bracelets are those with a more uniform geographic distribution between Andalusia and Levante (the eastern region of the Iberian Peninsula). In Andalusia, although they appear throughout the whole region, they are mainly concentrated in the Almanzora Valley and the Sierra Harana area (Granada).

Likewise, medium bracelets present a homogeneous distribution in the two geographical areas, but they are more characteristic of Levante, especially the ones with a square and flat section, which appear exclusively in said area. The wide bracelets and the ones decorated with parallel lines are characteristic of Andalusia while they have little representation in Levante.

Generally, those ornaments were mainly elaborated using indigenous materials, being marble the most valued lithology due to its physical qualities and distribution. Their functionality is evident in the traces left by their use and in anthropometric comparisons: they were used in contact with the skin for long enough to appear traces of use on the inside.

The narrow bracelets were repaired as articulated bracelets, and fragments were reused as pendants. In addition, traces of repairs show that the bracelets were used for a long time after repairing them.

“Repairs to the bracelets are more representative, in percentage, in Levante than in Andalusia, which makes us deduce that they had more social value in Levante, since they are pieces that, in most cases, were obtained by exchange. Said distinctive social value is also observed among different regions of Andalusia, given that the number of repaired parts is greater where that kind of bracelet was less frequent”, says Martínez Sevilla.