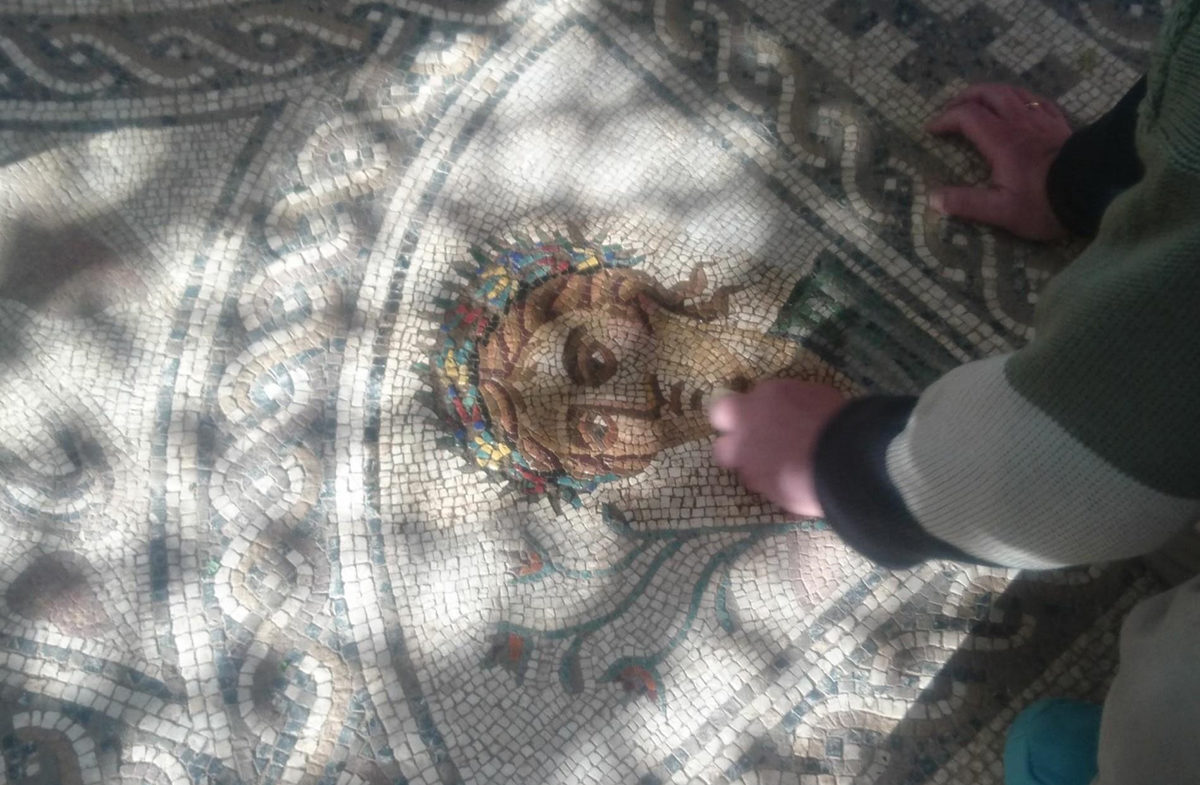 An interdisciplinary research team is currently analysing the famous mosaic ‘mosaico de los amores’. This is one of the largest and best preserved Roman mosaic floors of the Iberian peninsula.

A research team from the departments of archaeology and chemistry of Ghent University is in the south of Spain to extensively study this mosaic together with colleagues from the universities of Jaèn (Spain, Prof. Alberto Sanchez) and Évora (Portugal, Prof. José Mirao).

The oldest findings on the archaeological site of Càstulo, close to Linares in the Spanish region Andalusia, date from the Neolithic, ca. 3000 BCE. During bronze age, the site was used by Iberians, who fortified the site to construct an oppidum.

The south of the Iberian peninsula became under the influence of Carthage, but after the Punic wars Roman influence in the region grew, and the site was used by the Romans.

The mosaic dates back from the end of the first, beginning of the second century of the current era, and was found in the remains of a public building that is associated with the Roman empire Domitianus.

Out of scientific curiosity, but also to support conservation treatments, scientists want to know which materials were used in this remarkable mosaic, and if possible, to determine their provenance.

The research team of professor Peter Vandenabeele (Ghent University, Belgium) is specialised in this non-destructive archaeometrical research. Therefore, the team takes all possible precaustions not to damage the mosaic. Mobile scientific equipment is transported to Spain.

On site, the instruments are positioned on pillows and the researchers wear felt slippers. The mosaic is composed of different scenes. In the corners, the four seasons are depicted, and in the centre two mythological themes are present: on the one hand the story of Jupiter and the moon, on the other hand the history of Paris.

Vandenabeele: ”It is remarkable to see how many colours are used in this mosaic.” The six scenes with Eroti – small figurines with wings, arrows and arch – gave the name to this mosaic de los amores.

Next to the identification of the different tiles, the team uses this campaign also to evaluate the use and sensitivity of the different spectrometers in the field. Therefore, the research group left for Spain with a car packed with measuring instruments.

Next to the own devices, the companies Bruker and BWTek loaned highly specialised spectrometers, for this project. To position the probe heads, and to keep them immobile during measurements, the scientists lay down on pillows on the mosaic. At the beginning of the campaign, ambient temperatures in Spain were relatively low.

The campaign lasts almost 3 weeks, till 25 April, and already quite some preliminary results were obtained. Different tiles could be identified and it was proven that, next to stones, also synthetic tesserae in glass or glazed ceramics were used.