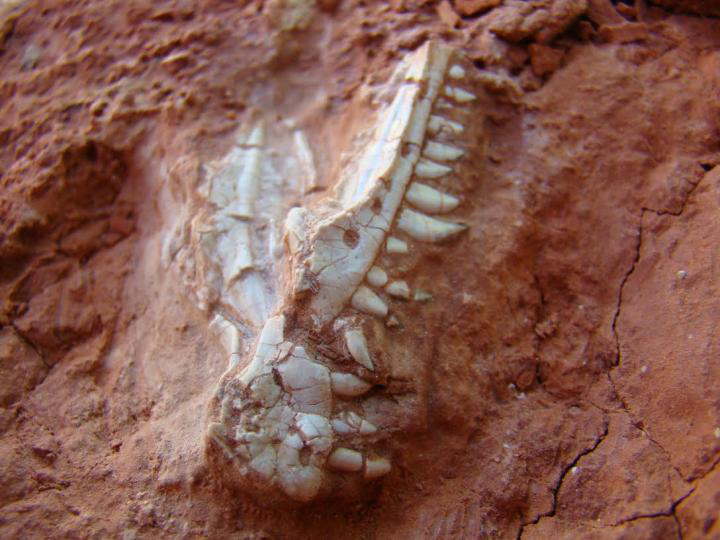 Researchers have discovered two small dinosaurs together with a lagerpetid, a group of animals that are recognized as precursors of dinosaurs. The discovery made in Brazil and reported in the Cell Press journal Current Biology on November 10 represents the first time that a dinosaur and a dinosaur precursor have ever been found together.

The new lagerpetid (Ixalerpeton) and saurischian dinosaur (Buriolestes) were unearthed from the ~230-million-year-old Carnian Santa Maria Formation – one of the oldest known rock units including dinosaur fossils anywhere in the world.

“We now know for sure that dinosaurs and dinosaur precursors lived alongside one another and that the rise of dinosaurs was more gradual, not a fast overtaking of other animals of the time,” says Max Langer of Brazil’s Universidade de São Paulo.

The discovery clearly shows that these animals were contemporaries of each other during the earliest stages of dinosaurs’ evolution. The new lagerpetid specimen also preserves the first skull, scapular, and forelimb elements, plus associated vertebrae, known for the group, the researchers report. Tooth evidence also shows that the first dinosaurs most likely fed on “all kinds of small animals, but most probably not plants,” Langer says.

Those details help to reveal how dinosaurs acquired some of their characteristic anatomical traits. Their analysis also suggests that Buriolestes is one of the oldest known Sauropodomorpha, the group of long-necked dinosaurs that includes sauropods.

The two new animals have already helped to fill important gaps in the evolution of the key anatomical features of dinosaurs. But Langer and his colleagues aren’t done with them yet. They are using CT scans to characterize and describe the animals’ anatomy in even greater detail. They also hope to get an even more precise radioisotopic date on the oldest dinosaur-bearing rocks, and the search for more Triassic fossils continues.