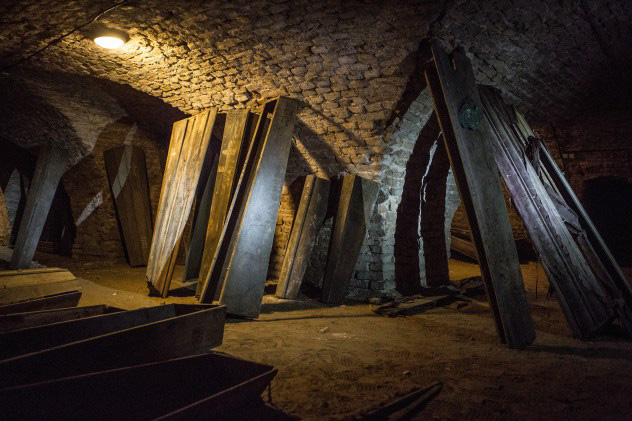 It was detected in the mummy of a child found in a church in Vilnius, Lithuania

The partially mummified remains of a young child have offered a unique insight into the history of a once-feared disease. The remains, recovered from the crypt of the Dominican Church of the Holy Spirit in Vilnius, Lithuania, have been dated to the mid-17th century. Despite no visual sign of disease, the mummy yielded a complete genome for variola (major) virus, indicating the presence of a smallpox infection. This 17th century variola strain was found to be ancestral to all known 20th century strains (dating from approximately the end of WWII to the time of smallpox eradication in the late 1970s) which suggests that smallpox is a much more recent infection in humans than previously presumed. Additionally, a reconstruction of the evolutionary history of variola virus hints that the split between the more virulent variola major and the less virulent variola minor forms may have occurred in response to evolutionary pressure by the advent of vaccination in 1796.

The abstract of the paper reads: “Smallpox holds a unique position in the history of medicine. It was the ﬁrst disease for which a vaccine was developed and remains the only human disease eradicated by vaccination. Although there have been claims of smallpox in Egypt, India, and China dating back millennia, the timescale of emergence of the causative agent, variola virus (VARV), and how it evolved in the context of increasingly widespread immunization, have proven controversial . In particular, some molecular-clock-based studies have suggested that key events in VARV evolution only occurred during the last two centuries and hence in apparent conﬂict with anecdotal historical reports, although it is difﬁcult to distinguish smallpox from other pustular rashes by description alone. To address these issues, we captured, sequenced, and reconstructed a draft genome of an ancient strain of VARV, sampled from a Lithuanian child mummy dating between 1643 and 1665 and close to the time of several documented European epidemics. When compared to vaccinia virus, this archival strain contained the same pattern of gene degradation as 20th century VARVs, indicating that such loss of gene function had occurred before ca. 1650. Strikingly, the mummy sequence fell basal to all currently sequenced strains of VARV on phylogenetic trees. Molecular-clock analyses revealed a strong clock-like structure and that the timescale of smallpox evolution is more recent than often supposed, with the diversiﬁcation of major viral lineages only occurring within the 18th and 19th centuries, concomitant with the development of modern vaccination”.