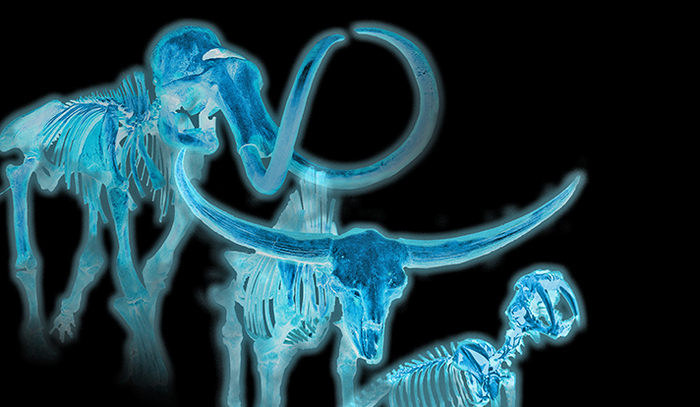 The ghosts of Ice Age mammals can teach valuable, real-world lessons about what happens to an ecosystem when its most distinct species go extinct, according to a Yale University study.

Researcher Matt Davis tracked the history of some of the world’s largest mammals and the roles they played within their respective environments. The findings appear in the Jan. 11 online edition of the journal Proceedings of the Royal Society B.

On the plus side, Davis said, the Ice Age wasn’t as hard on functional diversity — the role that an animal plays within an ecosystem — as previously thought. Animals that survived the Ice Age, such as the beaver, proved to be just as distinct as those that did not survive. On the minus side, Davis found, our planet has reached a point where losing even a handful of key mammals will leave as much of a gap as all of the Ice Age mammal extinctions put together.

The planet lost about 38% of its large-mammal, functional diversity during the Ice Age. Those species included wooly mammoths, giant ground sloths, stout-legged llamas, and giant beavers.

“You can think of it like a big tent where every animal is holding a pole to keep the tent up,” said Davis, a graduate student in Yale’s Department of Geology and Geophysics. “We lost a lot of species when humans first arrived in North America, so part of our tent fell down — but not as big of a part as we previously thought. However, now we only have a few animals left holding up those poles. If they die, the whole tent could collapse.”

One aim of the study was to examine the relationship between functional diversity and extinction risk: Were the most distinct species the ones most at risk? Davis found that for large Ice Age mammals in North America, distinct species with unique traits were not more likely to go extinct. That is why the Ice Age extinctions were not as harsh on the surrounding ecosystems, Davis said.

In the case of mammoths, nothing was able to replace their lost function — essentially, being really, really big — once they were gone. However, Davis found that European domestic animals, introduced later, did restore some functional diversity. Another example of this is burros, which came along after the extinction of Shasta ground sloths. Both the burro and the Shasta ground sloth share similar diets and body masses.

For today’s species, such redundancies in functionality are much less frequent, Davis explained. Vulnerable species like polar bears, jaguars, and giant anteaters have no functional equivalent.

“Examining the past through the fossil record actually allows us to better predict future extinctions,” Davis said. “We can’t understand how valuable or vulnerable species are today without considering the ‘ghosts’ of those species that died before them.”