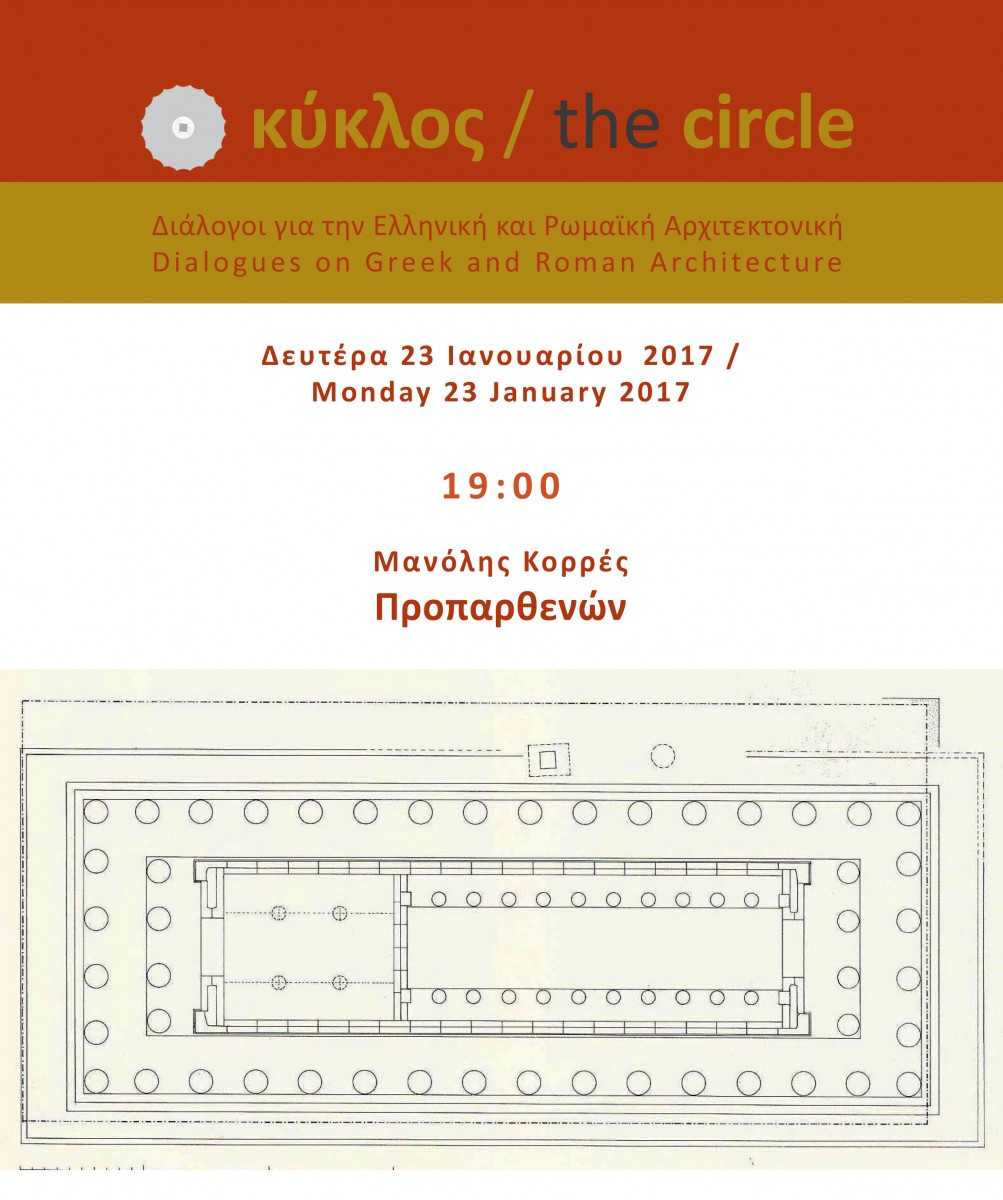 Today, Professor Manolis Korres (NTUA) will give a lecture on “The Proparthenon” at the Austrian Archaeological Institute. The lecture is part of the “The Circle – Dialogues on Greek and Roman Architecture”.

In 1902 Doerpfeld interpreted the enormous stereobate of the Parthenon as a separate project (Parthenon I, octastyle) preceding that of the so called Older Parthenon (Parthenon II, hexastyle). The theory was seriously attacked by Dinsmoor in 1935, but the evidence collected since then always supports it, indeed as it was improved by Hill in 1912 (Parthenon I, hexastyle of poros, with columns and axial spacing far exceeding that of the present building).

Parthenon II was the first Doric temple in history to be built entirely of marble, and for this purpose the quarries on Mt. Pentelikon went first into operation (marble had been used still earlier, in Athenian buildings but for distinctive parts only).

Pentelic marble was more valuable, heavier than Piraeus limestone and available in abundance, but so structured that it was difficult to find pieces matching the sizes demanded for Parthenon I. For this reason the new temple was designed with shorter intercolumniations, and therefore more columns along the flanks, than Parthenon Ι. Nevertheless, the fifteen intercolumniations along each side would not have covered the whole length of the huge platform put in place for the earlier, unbuilt Parthenon I. The columns would have had a diameter of c. 1.90 m.; their intended height is not known, but it is estimated at c. 9.57 m.

The design of the sekos is surprising for a Doric temple, for the two end facades are prostyle instead of the usual distylein antis, and the socle has a boldly-profiled moulding rather than the usual plain vertical face. These features betray an Ionian, or rather Cycladic, influence that has not been seen before.

Unfortunately, that Parthenon, like its immediate predecessor, remained unfinished. Construction work on it,which had progressed to the height of the second or third column drums, was probably halted in about year 485, when the threat of a full-scale Persian invasion loomed and work was begun during Themistokles’ programme of strengthening the fortifications and building a large fleet. Another ambitious plan, for the construction of a magnificent marble propylon on the site of the Propylaia that we see today, was abandoned at the same time.

Although unfinished and buried under Parthenon III, Parthenon II is possible theoretically to be nearly completely restored, using all data borne by its numerous stones incorporated into the Periclean building, into the North Wall, or elsewhere.