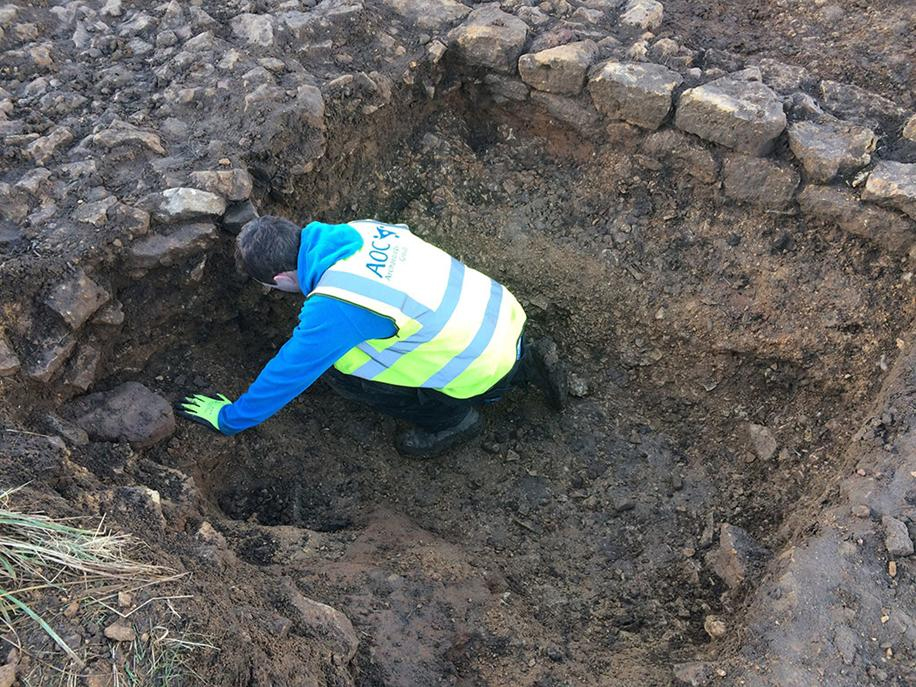 A fascinating glimpse into past Roman and Iron Age communities

Preliminary works for a relief road in Lincolnshire have provided a fascinating glimpse into past Roman and Iron Age communities, settlements and landscapes in the area.

Since November, a team of more than 15 archaeologists has been carrying out investigations to ensure that any remains affected by the new road are protected or recorded.

Catherine Edwards, Project Manager for AOC Archaeology – the firm contracted to research the site’s archaeology – said: “This is a very interesting and mysterious site that has really allowed us to sink our teeth in so that we can learn more about what was happening in this area of Grantham centuries ago, particularly during Roman times.

“The archaeology we’ve been finding includes lots of linear ditches, quarry pits, kilns, coins and a cemetery, but we’re also finding unexpected remains like a stone wall near to a metalled/roughly paved surface with an earlier ditch underneath.

“Previous to starting on-site back three months ago, research work was carried out including a geophysical survey and archaeological trenching. From there, we began targeting and excavating areas that the research flagged up so that we can truly understand the archaeological record of the site and how it fits into Grantham’s rich history.

“A full understanding will have to wait until all the results are processed and reported on. Despite being nearly done on-site, there’s still a lot more work to be done behind the scenes before we have the full picture – but what has been unearthed so far suggests it will be well worth the effort and very enlighthening.”

A full report containing details of what has been discovered will be issued in this summer.

Cllr Richard Davies, Executive Member for Highways and Transport, said: “When building a new road, it’s not just about just about digging holes and putting in tarmac. Before this can happen, it is very important to undertake work to protect the heritage of the area and look at the archaeology underground before we start building.

“It’s really important that whenever you’re building a big piece of infrastructure like Grantham Southern Relief Road, that work is done to find out what’s gone on here for thousands of years for future generations to learn from and understand.”