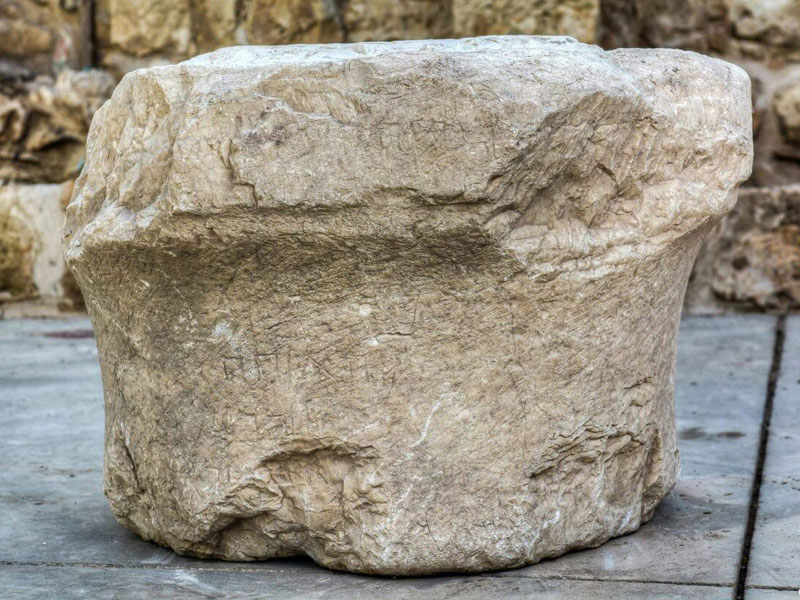 An 1,800 year old limestone capital dating to the Roman period that is engraved with two Hebrew inscriptions was discovered during the course of restoration and conservation work being carried out in the ancient synagogue and neighboring Beit Zinati visitor center at Peqiʽin, in the Western Galilee. The work is being conducted by the Council for Conservation of Heritage Sites in Israel as part of a heritage project by the Ministry of Jerusalem Affairs and Heritage.
The stone was found upside down in the building’s courtyard, and upon discovery of the inscriptions archaeologists of the Israel Antiquities Authority arrived at the site in order to examine the special find. A preliminary analysis of the engraving suggests that these are dedicatory inscriptions honoring donors to the synagogue.

According to Yoav Lerer, the IAA inspector in the Western Galilee, “The Talmudic and Midrashic sources tell of the Galilean sages that lived in Peqiʽin, including Rabbi Shimon Bar Yochai, who hid from the Romans in a cave. However, there are those who disagree with the identification of the location of Peqiʽin. I believe that these inscriptions will add an important tier to our knowledge about the Jewish settlement in the village of Peqiʽin during the Roman and Byzantine periods”.

In the past year rehabilitation and conservation work was carried out in Peqiʽin’s ancient synagogue and nearby Beit Zinati in order to upgrade the visitor center located there. The visitor center will tell the two thousand year long history of the Jews in the village, and the unique story of the Zinati family – the village’s oldest Jewish family. Until today Margalit Zinati, the last member of the Jewish Zinati family to “keep the flame alive”, resides in the house next door to the synagogue.

Ze’ev Elkin, the Minister of Jerusalem Affairs and Heritage, said: “Peqiʽin is one of the most significant sites in the Galilee, and is a place where there has always been a Jewish presence. It is a great honor for me that during my tenure in office such an important discovery has been made that tells this 2,000 year old story of the Land of Israel”.

Uriel Rosenboym, director of Beit Zinati said: “This is a historical discovery of unparalleled importance that confirms what the late President Yitzhak Ben Zvi maintained in the early twentieth century about the Jewish settlement at Peqiʽin. No one can argue with the written artifact. There was an ancient synagogue here and the synagogue was built in its current form in recent centuries. We thank the Ministry of Jerusalem Affairs and Heritage, which aims to preserve the heritage of Peqiʽin’s Jews. We are pleased to open the new museum with a historic message about this ancient community. Although the stone itself was taken to be studied by the Israel Antiquities Authority, this unique story of the keepers of the flame in Peqiʽin is revealed in the renewed museum”.