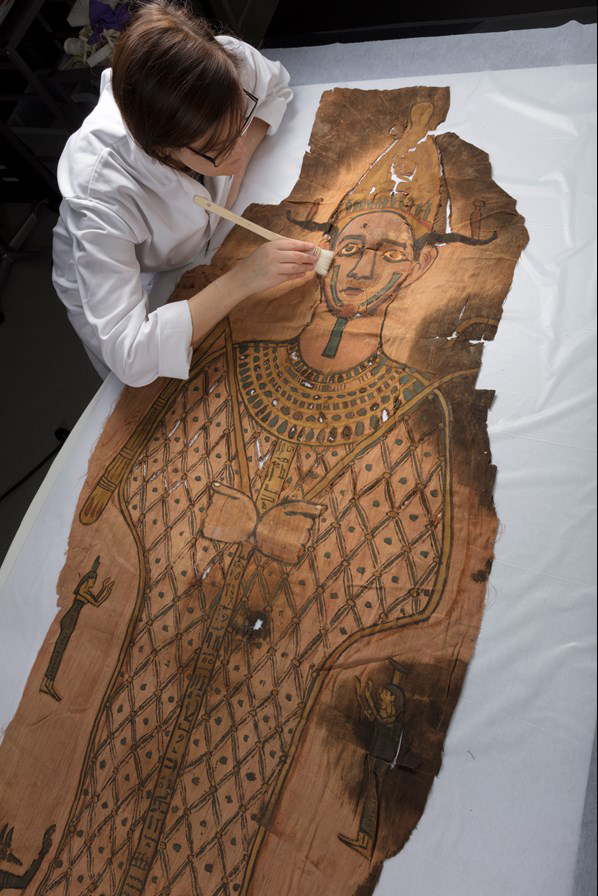 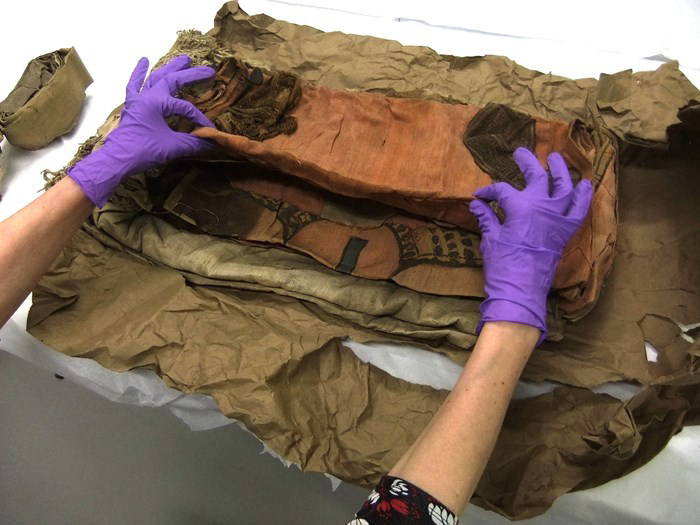 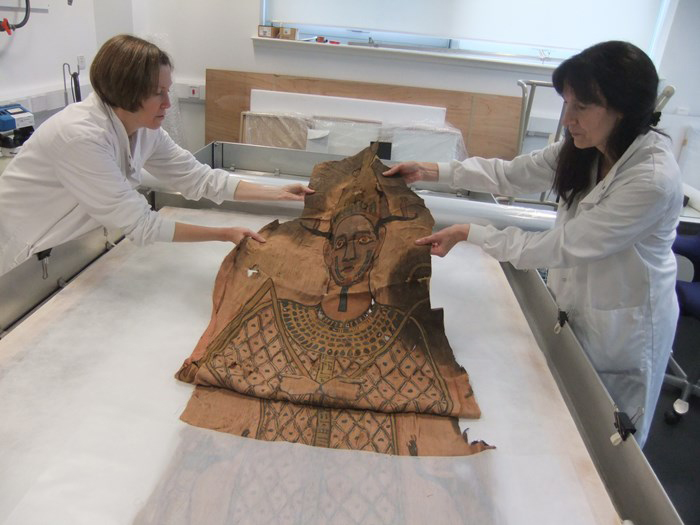 A unique, full-length mummy shroud, which is over 2,000 years old yet is still in remarkable condition, has been discovered in National Museums Scotland’s collections.

The shroud, which dates to approximately 9 BC, was discovered by curators during an in-depth assessment of National Museums Scotland’s internationally significant ancient Egyptian collections in preparation for a new, permanent ancient Egypt gallery which will open at the Museum in 2018/19.

Dr Margaret Maitland, Senior Curator of Ancient Mediterranean collections found the folded shroud wrapped in brown parcel paper, with a note written by a past curator in a Second World War service envelope identifying the contents as having come from an ancient Egyptian tomb. The package had been stored since the mid-1940s.

Due to the fragility of the ancient textile, conservators gently humidified it so that the fibres would become less dry and brittle. This allowed them to carefully unfold the shroud, a process which took almost 24 hours. Upon unfolding it, a hieroglyphic inscription on the shroud revealed the identity of the owner to be the previously unknown son of the Roman-era high-official Montsuef and his wife Tanuat.

“To discover an object of this importance in our collections, and in such good condition, is a curator’s dream”, said Dr Margaret Maitland, Senior Curator of Ancient Mediterranean collections.

“Before we were able to unfold the textile, tantalising glimpses of colourful painted details suggested that it might be a mummy shroud, but none of us could have imagined the remarkable figure that would greet us when we were finally able to unroll it. The shroud is a very rare object in superb condition and is executed in a highly unusual artistic style, suggestive of Roman period Egyptian art, yet still very distinctive”, Dr Maitland added.

In ancient Egypt, following mummification, a shroud was commonly wrapped around the body before it was placed in a coffin. In Roman-era Egypt, shrouds became increasingly important as the use of coffins became rarer.

This full-length, painted linen shroud is unique, with very few parallels from its period. It depicts the deceased as the god Osiris. Because of its owner’s direct relationship to Montsuef and Tanuat, whose deaths were recorded to have occurred in 9 BC, it is possible to date the shroud relatively precisely, which is extraordinary for such an ancient artefact.

The shroud comes from a Roman-era burial in a tomb originally built around 1290 BC opposite the great city of Thebes (modern-day Luxor). First built for a chief of police and his wife, it was looted and reused several times, before being sealed in the early 1st century AD.

Undisturbed for thousands of years

It was undisturbed until its excavation in the 19th century when a collection of beautiful objects from various eras was discovered. The shroud is one of a number of objects from this tomb which are in National Museums Scotland’s collections. The Tomb: Ancient Egyptian Burial, will tell the story of this tomb across 1,000 years of use.

““It is extraordinarily rare that we have such an incredible group of objects belonging to a whole ancient Egyptian family in our collections. To have been able to expand this group of objects with this new discovery is very exciting, and further enhances our understanding of the story of this wonderful tomb and its occupants,” according to Dr Maitland.

The shroud will be on display in the exhibition The Tomb: Ancient Egyptian Burial from 31 March-3 September 2017, after which it will return to storage because of its fragility and light-sensitivity.