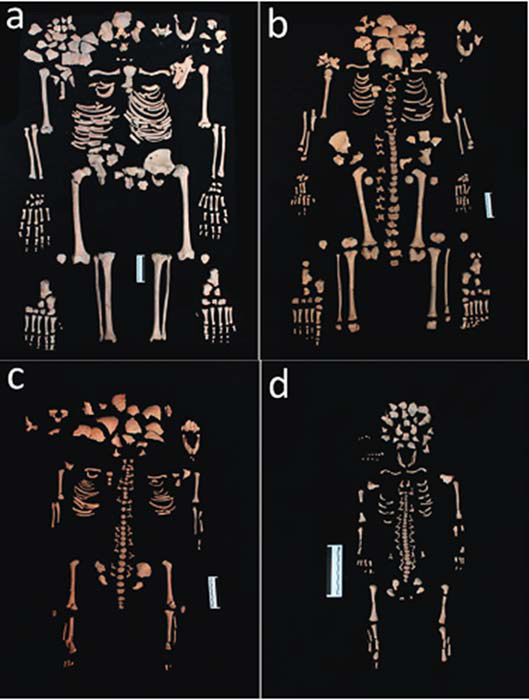 A plague victim and her tragic coffin birth in medieval cemetery

Researchers have identified a rare “coffin birth” in a 14th-century burial ground at the hostel of San Nicolao di Pietra Colice in the Northern Apennines.

In 2006 archaeologists found a multiple burial date to the second half/end of the 14th century in the cemetery pertaining to the “ospitale” of San Nicolao in the Northern Appenines, 45 miles from Genova. The “ospitale” was a resting place/hostel by traders and travellers (e.g. pilgrims heading for Rome). The discovery has recently been fully investigated.

“The excavation showed that it contained the remains of four individuals: a 38–40 week pregnant woman with her fetus and two sub-adults”, researchers D. Cesana et al write in the abstract of their paper, entitled “The origin and early spread of the Black Death in Italy: first evidence of plague victims from 14th-century Liguria (northern Italy)”. “Stratigraphy showed that these individuals were buried simultaneously. Given that the dating of the burial fits the arrival of the Second Pandemic in Europe, it was hypothesized that they might have died during the Black Death epidemic”, the researchers add.

Researchers investigating the burial have identified a case of “coffin birth”, which means that the deceased woman was pregnant at the time of her death and the woman’s fetus was expelled within the grave. Coffin births or “postmortem fetal extrusions” are rare in the archaeological record. It is caused by the build-up of gas pressure from the decomposition of a pregnant woman’s body.

The fetus was about 38-40 weeks old. DNA analysis will possibly determine if the woman and the two children were related.

As explained in  an article published in Ancient Origins on Jan. 25, 2016, identifying coffin births is not easy: “In bioarchaeology, identification of this process can be difficult due to skeletonization. Presence of a fetus with a female is not enough since the two may be put together even if they died within a short time period of one another. The location of the two sets of remains and the positioning is important to recognize. Lewis (2007) argues that identification of coffin birth requires that the fetal remains are complete and in a position inferior to and in line with the pelvic outlet. The head of the fetus should be oriented opposite to that of the mother. Aging of the subadult is also important to determine if it was young enough to be a neonate rather than just a young infant. In the article by Appleby et al. (2012) a neonate skeleton aged 33-35 weeks of gestation was found in this position. Due to this evidence, they argue that this is a case of coffin birth.  While the site dates to the 1830’s, when chemical preservation was increasing in use- the deceased population was primarily slaves or freed slaves who may not have had the funds to preserve their dead or may not have wanted this type of process. Other examples of coffin birth in bioarchaeology have been discovered, showing that this occurred throughout history”.