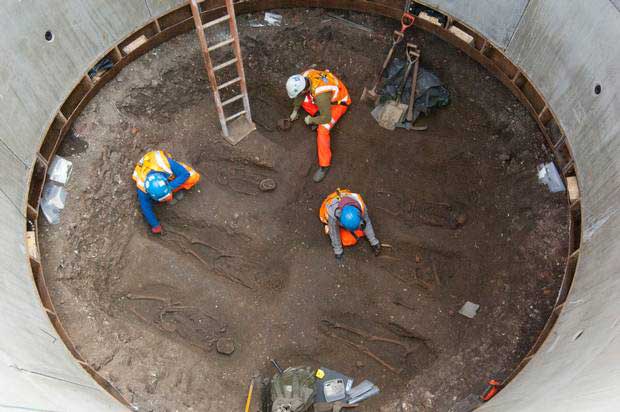 Victims of the Black Death

Archaeologists announced they have found an unknown burial site, which could be the final resting place for as many as 50,000 victims of the Black Death (plague), more than 650 years ago. The find occurred as workers were digging at about 8ft underground on the road surrounding Charterhouse Square in Farringdon in the City of London.

So far the skeletons of 13 adults, laid out in two neat rows, have been found under Charterhouse Square in Farringdon during excavation work for the £14.8 billion Crossrail project.

After studying the historical archives, researchers have come to the conclusion that the area, described as a “no man’s land”, housed, at some point in the past, a hastily established cemetery for the victims of the bubonic plague, which killed more than a quarter of England’s population in 1348.

At this early stage, the depth in which they were buried, the pottery found in the graves and the layout of the skeletons all points towards this being part of the 14th century emergency burial ground, Crossrail lead archaeologist Jay Carver said.

The few preserved records suggest that 50,000 people might have been buried at the Farringdon cemetery in less than three years, as the plague was sweeping through the city.

Archaeologists hope that the skeletons, which were removed from the site in order to be examined, will shed light to the DNA signature of the plague virus and will confirm the dates of burial.

The find might be the second most important medieval discovery in recent time in England, after Richard III’s discovery.

The Crossrail project is Europe’s biggest construction project, and will open in 2018. So far skeletons from 300 tombs have come to light near the notorious mental health institution of Bedlam, in central London.