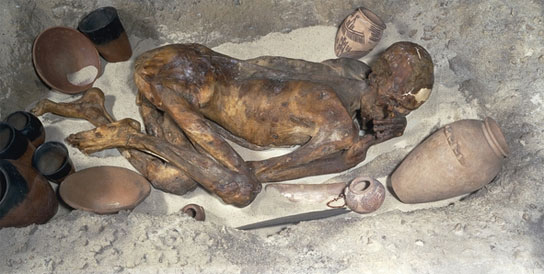 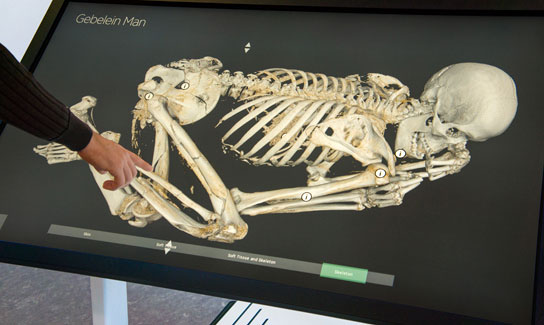 Virtual autopsy at the British Museum

It is the second most popular “tenant” of the British Museum, after the Rosetta Stone: The Gebelein Man, a naturally-preserved Egyptian mummy. “Ginger” (his nickname given due to his hair colored with red henna) came to light in 1896 and was sold to the British Museum.

What we know about him is that he was born in Egypt shortly before 3400 BC, and died at the age of 18 years. The cause of his death was deduced by the scientists from a cut on his back.

Ginger was buried in a shallow pit, in about 3500 BC, at the Gebelein cemetery in Upper Egypt (40 km south of Thebes). High temperature and direct contact with the dry sand had then rapidly absorbed the moisture of his body, which is why he is one the best preserved mummies from ancient Egypt.

Recently he was taken to the Bupa Cromwell Hospital in London, where he was X-rayed. The detailed images and 3D models created allowed scientists to learn more about Ginger: “Not only have we been able to discover that Gebelein Man was young when he died (18-21 years) but, unexpectedly, we have also learned that he died because he was stabbed in the back. The analysis of ancient human remains rarely reveals the cause of death but the cut on his back, as well as the damage to the underlying shoulder blade and rib, are characteristic of a single, fatal, penetrating wound”, as Daniel Antoine, Curator of Physical Anatomy at the British Museum, explains.

Now, a virtual autopsy table is on show in Room 64 of the British Museum. There, visitors will explore the mummy for themselves using the interactive touchscreen and the gesture-based interface.

“Virtual autopsy: explore a natural mummy from early Egypt” is on display in Room 64 until 16 December 2012.