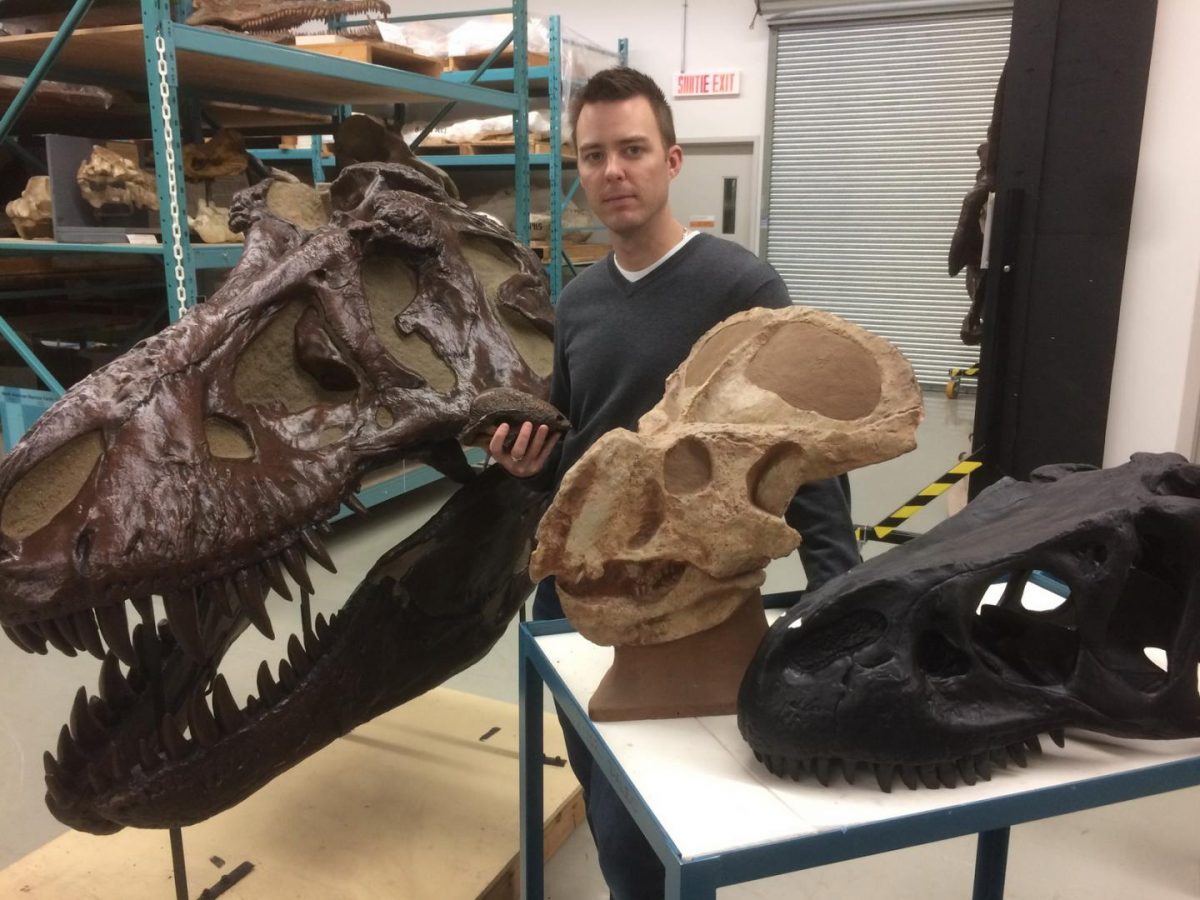 Dr. Jordan Mallon says it might be time torewrite the textbooks

A paleontologist at the Canadian Museum of Nature is countering decades of studies that assert that some dinosaurs can be identified as male or female based on the shapes and sizes of their bones.

Dr. Jordan Mallon, a dinosaur specialist at the museum, argues instead that the fossil evidence for these distinctions is inconclusive and, as a result, it might be time to “rewrite the textbooks.” His report, published today in the online journal Paleobiology, focusses on the biological principle of sexual dimorphism, where males and females of a species can be distinguished based on physical characteristics other than sexual organs.

“I’m not saying that dinosaurs were not dimorphic, but I am saying that there’s no existing fossil evidence to suggest that they were. The jury is still out,” says Mallon.

Mallon made his assessment by revisiting previous studies attributing sexual dimorphism to dinosaurs. The problem, he explains, is that some of those studies not only relied on small sample sizes, but, more importantly, they did not properly analyze the statistical data, which led to invalid conclusions.

“Essentially, if you go back and recrunch the data of those original studies using proper statistical tests such as mixture modelling, then there’s no dimorphism”, explains Mallon. “While others have doubted the existence of dimorphism from the dinosaur fossil record, this is the first published report to show that’s the case.”

Mallon reviewed data on nine species, ranging from horned dinosaurs, to stegosaurs to meat-eating dinos. Among the studies was a seminal 1976 paper assigning sexual dimorphism to about 20 specimens of a horned dinosaur called Protoceratops andrewsi. The author’s analysis said males could be distinguished from females by a broader frill and larger bump on the nose. While the study used a large sample size, Mallon’s retesting of the data shows there is not enough evidence to separate the specimens into two distinct groups based on the shapes of their bones.

Mallon notes that there are ways of distinguishing male dinosaurs from females, but, to date, these sorts of data are sparse and do little to inform an understanding about whether the sexes differed in their external anatomy.

“There are ways of determining the sex of individual females, for example, as some fossils have been found with eggs preserved inside them,” he explains. Mallon also notes that researchers can look for medullary bone, which is a spongy bone deposited in the long bones of egg-laying females, as seen in birds today.

“What we need to do is examine dinosaur specimens that we can positively identify as females, and if you can survey a large enough population of them, you can then say this is what we expect females to look like. One can then study the remainder of the population to compare which ones look like the females that we already know, and which ones don’t. Those would be the males,” says Mallon.

Mallon maintains that he would not be surprised if dimorphism did exist among some dinosaurs, because the phenomenon is seen in living animals such as birds and crocodiles, which are the nearest living relatives of dinosaurs. Male crocodiles, for example, are larger than females, and the male peacock has a large colourful tail.

The challenge for paleontologists is to find fossils of a given species in a large enough number and of similar age to do a proper statistical analysis. And, as Mallon points out, the studies to date are lacking in that regard.

“What I suggest in this paper is that if we want to get at the question of sexual dimorphism in dinosaurs, then it’s going to be really hard to go about it the traditional way,” he explains. “We’ll need to keep searching.”