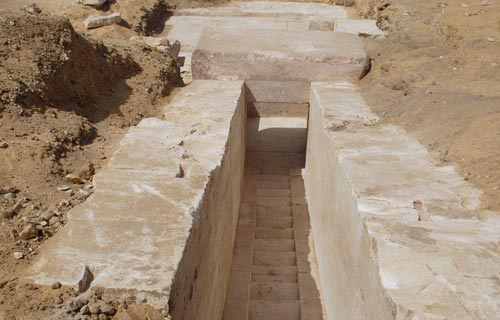 Remains of a hitherto unknown pyramid have been unearthed in Dahshour

Dating to the 13th Dynasty

Remains of a hitherto unknown pyramid have been unearthed in Dahshour, near Cairo, Egypt.

According to a statement by the head of the ancient Egyptian Antiquities Sector at the Egyptian Ministry of Antiquities Dr. Mahmoud Afifi, the pyramid was located last Monday by an Egyptian team of archaeologists working in the area to the south of King Snefru’s Bent Pyramid (4th Dynasty, Old Kingdom); it dates to the 13th Dynasty, in the late Middle Kingdom.

Alaa Al-Shahat, Head of the Central Administration Department for Cairo and Giza Antiquities has asserted that the remains survive in a good condition; further excavation is to take place, aiming to reveal more on the structure.

According to Adel Okasha, Director General of Dahshour necropolis, what has been revealed represents a part of the pyramid’s inner structure, composed of a corridor running towards the interior, a hall that gives access to a ramp to the south, and a room to the western end. Archaeologists have also revealed a 15×17 cm-wide alabaster block engraved with hieroglyphs in ten vertical lines, a granite lintel and stone blocks associated with the pyramid’s interior.