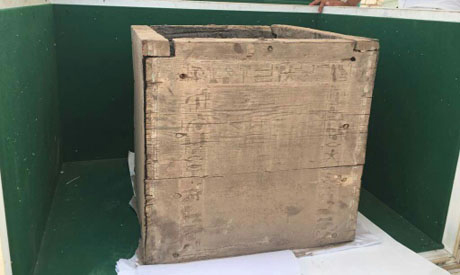 Canopic jars and remains of an anthropoid sarcophagus

The Egyptian archaeological mission from the Ministry of Antiquities uncovered the burial chamber of a 13th Dynasty Pyramid discovered last month in Dahshur archaeological site.

Adel Okasha, the head of the Mission and the General Director of the Dahshur site, explained that after removing the stones that covered the burial chamber, the mission discovered a wooden box engraved with three lines of hieroglyphs.

These lines are rituals to protect the deceased and the name of its owner.

Sherif Abdel Moneim, assistant of the minister of antiquities, reveals that the box once housed the four canopic jars of the deceased and the name engraved on it would be for the
daughter of the 13th Dynasty king Emnikamaw [Ameny Qemau] whose pyramid is located 600 meters away.

He said that last month the mission also discovered a relief with 10 lines of hieroglyphs bearing the Cartouche of King Emenikamaw [Ameny Qemau]. Hence the box may belongs to the King’s daughter or one of his family.

Inside the box, the mission has found wrappings of the deceased’s liver, intestine,  stomach and lungs. Remains of an anthropoid sarcophagus has been found but in a very poor conservation condition. Excavation works would continue to uncover more of the pyramid’s secrets.