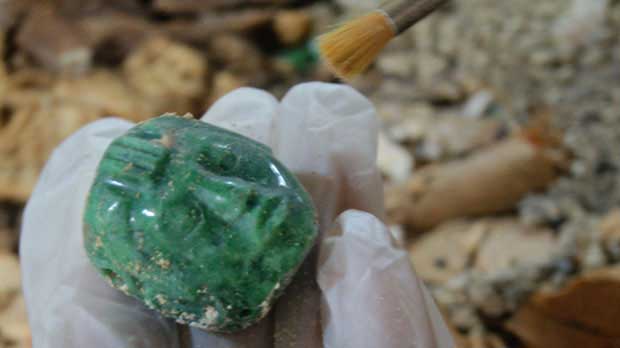 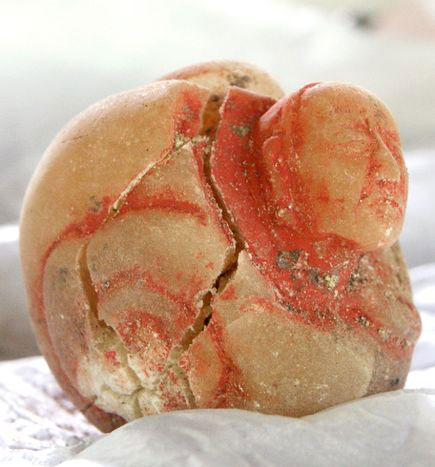 The suspected tomb and remains of a great Maya warrior queen have been discovered in Guatemala, archaeologists say.

Uncovered at the site of the ancient city of El Perú-Waka’, the tomb has been identified as likely belonging to Lady K’abel, military ruler of the Wak, or “Centipede,” kingdom between A.D. 672 and 692.

The tomb was found this year in the ruins of the city’s main pyramid temple during excavations led by archaeologist David Freidel of Washington University in St. Louis.

The body inside was buried with various offerings, including ceramic vessels, jade jewelry, stone figurines, and, crucially, a small alabaster jar carved in the shape of a conch shell, out of which the carved head and arms of an old woman emerge.

Maya hieroglyphs on the back of the jar include the names “Lady Water Lily Hand” and “Lady Snake Lord,” according to the study team.

Both names are thought to refer to Lady K’abel, who governed the Wak kingdom for her family, the empire-building Kan, or “Snake,” dynasty, based in the Maya capital Calakmul in what’s now Mexico.

While Lady K’abel ruled with her husband, K’inich Bahlam, her title of Kaloomte, or “supreme warrior,” gave her higher authority than the king.

Though the skeleton’s poor condition has made the individual’s age and gender difficult to determine, the skull’s robust facial features fit with ancient carved portraits of the stern-looking Maya queen, the study team said.

A red spiny oyster shell placed on the body’s lower torso also points to the tomb being hers: The queens of El Perú-Waka’ typically wore such shells as girdle ornaments, their team noted.

David Stuart, a professor of Mesoamerican art and writing at the University of Texas at Austin, said it’s difficult to identify “who’s who in royal tombs, unless they literally write it on the wall or something.”

Nevertheless, “for this find, I think there’s a fair chance it’s her,” added Stuart, who wasn’t involved in the study.

While it’s possible that the alabaster jar was a gift from Lady K’abel that ended up in another’s tomb, the interpretation of its hieroglyphs are “spot on,” Stuart said.

Matching the names given to the queen in other Maya inscriptions, the hieroglyphs leave “no question it’s the same woman” being referred to, he said.

The Snake dynasty had a policy of marrying off its princesses and noblewomen to kings of vassal states like the Wak kingdom, Stuart explained.

Women such as Lady K’abel were “the family connection to the great city to the north”—Calakmul, he added.

“They would show them on the monuments, and it would be part of the political symbolism of these local subject states.”

El Perú-Waka’, which covered about 1 square kilometer (0.4 square mile), was made up of temple pyramids, public plazas, palaces, and homes.

Hidden today beneath tropical rain forest, the once impressive buildings have been reduced to rubble mounds over the centuries.

The newfound royal tomb could explain why the Maya city remained a focus of reverence and ritual attention long after the collapse of the Wak kingdom.

The study team writes: “It is now clear to us that the golden age of the city, and the great queen and her husband who presided over it, were remembered and celebrated by ordinary people with their humble offerings and hopes for renewal of the future.”