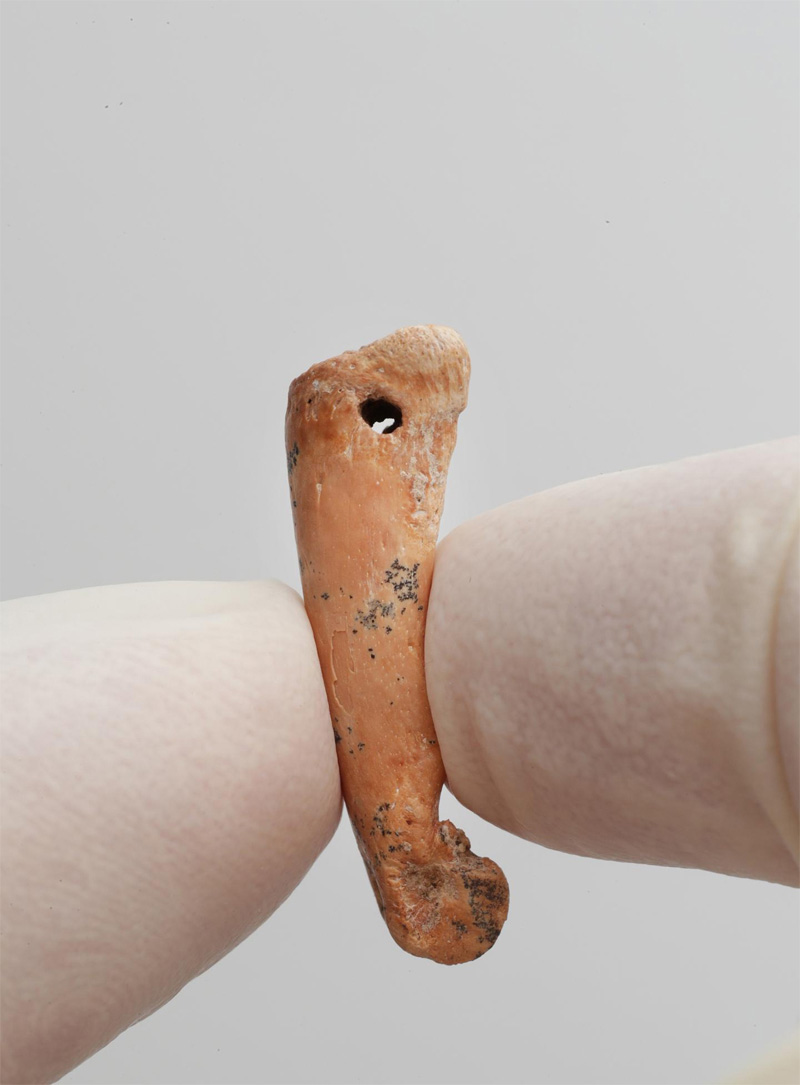 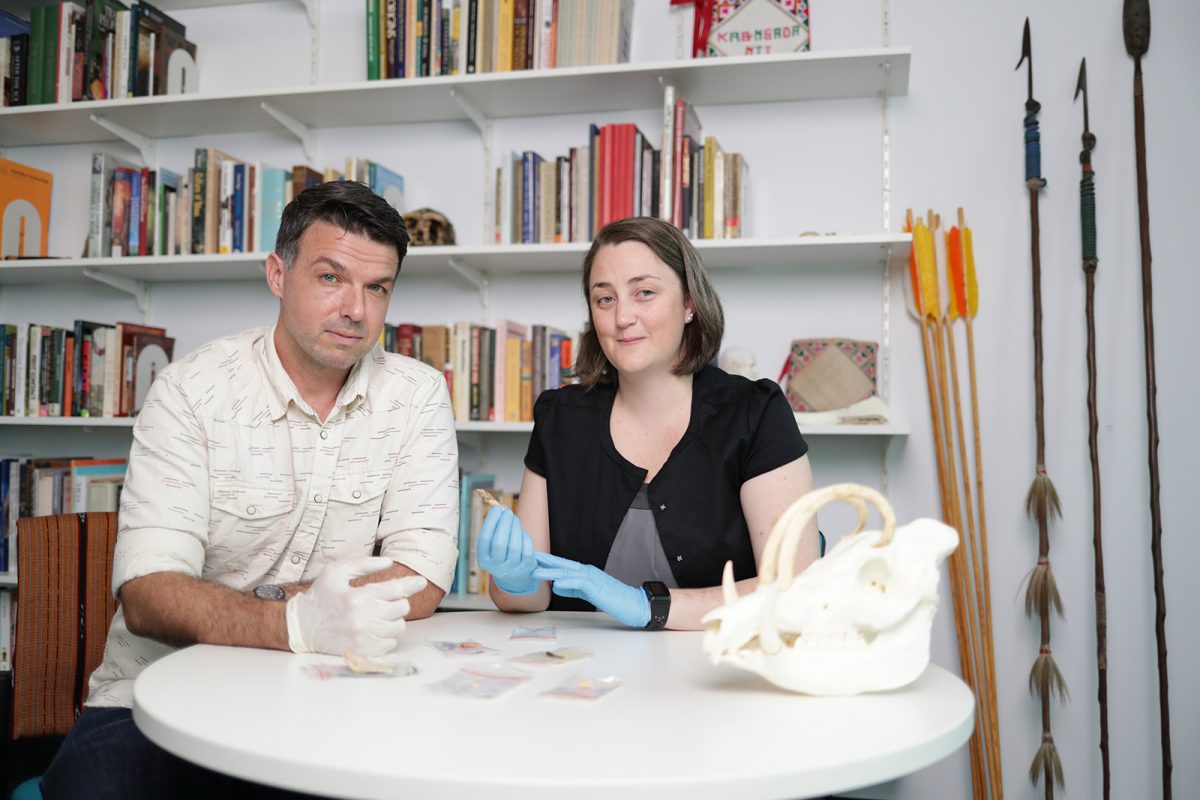 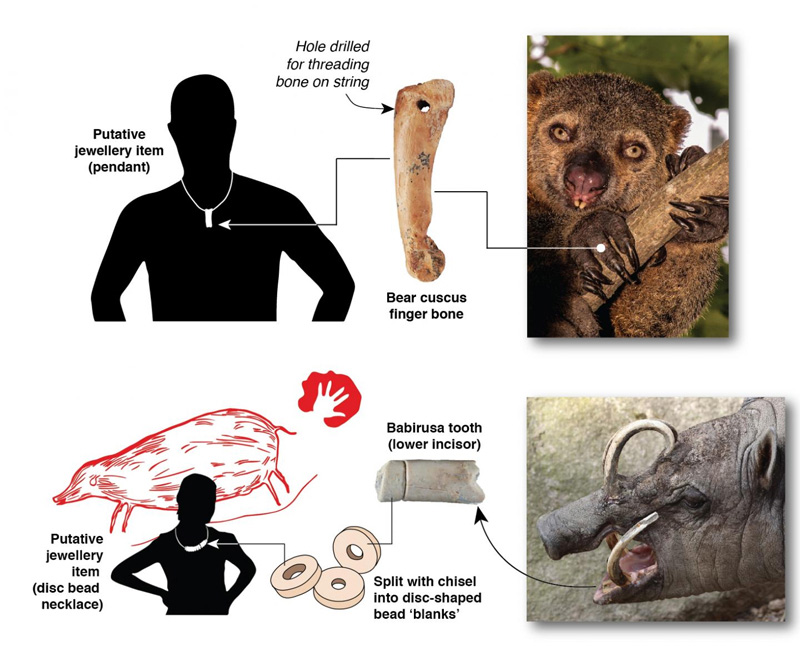 The Australian Research Centre for Human Evolution (ARCHE) team, based in Griffith’s Environmental Futures Research Institute, together with Indonesian colleagues, have shed new light on ‘Ice Age’ human culture and symbolism in a paper published in Proceedings of the National Academy of Sciences.

The study was co-led by Associate Professor Adam Brumm, an Australian Research Council (ARC) Future Fellow, and Dr Michelle Langley, who also holds a fellowship from the ARC, analysed the recovered artefacts, and is the country’s leading expert in the study of ancient ornaments and bone technology (fig. 2).

“Scientists have long been curious about the cultural lives of the first Homo sapiens to inhabit the lands to the immediate north of Australia sometime prior to 50,000 years ago — part of the great movement of our species out of Africa,” Associate Professor Brumm says.

“Some have argued that Pleistocene human culture declined in sophistication as Homo sapiens ventured beyond India into the Southeast Asian tropics and the island chains east of continental Eurasia, known as ‘Wallacea’.

“However, the onset of new research programs in Wallacea is steadily dismantling this view.”

Adding to the 2014 breakthrough discovery of 40,000-year-old cave art on the Wallacean island of Sulawesi, which is said to be some of the world’s oldest, is a unique assemblage of previously unknown symbolic objects excavated from a Sulawesi cave site called Leang Bulu Bettue.

The recovered artefacts, dated to between 30,000 to 22,000 years ago, consist of disc-shaped beads made from a babirusa (‘pig-deer’) tooth and a pendant fashioned from the bone of a bear cuscus (a large and primitive possum-like marsupial found only on Sulawesi). Dated to between 26,000 to 22,000 years ago, this humanly modified artefact (fig. 1) consists of a drilled and perforated finger bone from an endemic bear cuscus. The hole at one end formerly bore a string, while wear marks on the ornament show that it repeatedly rubbed against human skin or clothing during the period of its use. These facts suggest the perforated bone was suspended for use as a ‘pendant’ or similar jewelry object. Also found were ‘portable’ art objects: stones incised with geometric patterns, the meaning of which is unknown.

Dr Langley’s analysis also revealed extensive evidence for rock art production at the site, including discarded ochre pieces, ochre stains on tools, and a bone tube that may have been a ‘blow-pipe’ for creating hand stencil motifs, the earliest of which date to at least 40,000 years ago on Sulawesi.

“Previously, assemblages of multiple and diverse types of Pleistocene ‘symbolic’ artefacts were entirely undocumented from Wallacea,” she said.

“It was also unknown if or how Sulawesi cave artists adorned their bodies or whether their artistic repertoire even extended beyond rock paintings. Our understanding of the symbolic lives of these people is now much richer.”

The team says these early examples of art and ‘jewellery’ imply that the spiritual beliefs of modern humans may have transformed as they encountered new forms of animal life on the journey from Asia to Australia.

“Sulawesi, in particular, is renowned among biogeographers for its extremely high rate of species endemism – essentially all of the island’s land mammals, except for bats, occur nowhere else on earth,” Associate Professor Brumm says.

“The discovery of ornaments manufactured from the bones and teeth of two of Sulawesi’s flagship endemics – babirusas and bear cuscuses – and a previously recorded painting of a babirusa dated to at least 35,400 years ago, shows that humans were drawn to these dramatically new faunal species. This may indicate that the conceptual world of these people changed to incorporate exotic animals.”

The researchers think that this ‘symbolic negotiation’ with novel species might have been fundamental to the later settlement of Australia, which harboured unprecedentedly rich communities of endemic faunas and floras.

They speculate that the human journey through the biogeographically unique zone of Wallacea might have prompted new ways of thinking about the natural world, suggesting elements of the complex human-animal spiritual relationships that define Aboriginal cultures may actually pre-date the initial colonization of Australia.