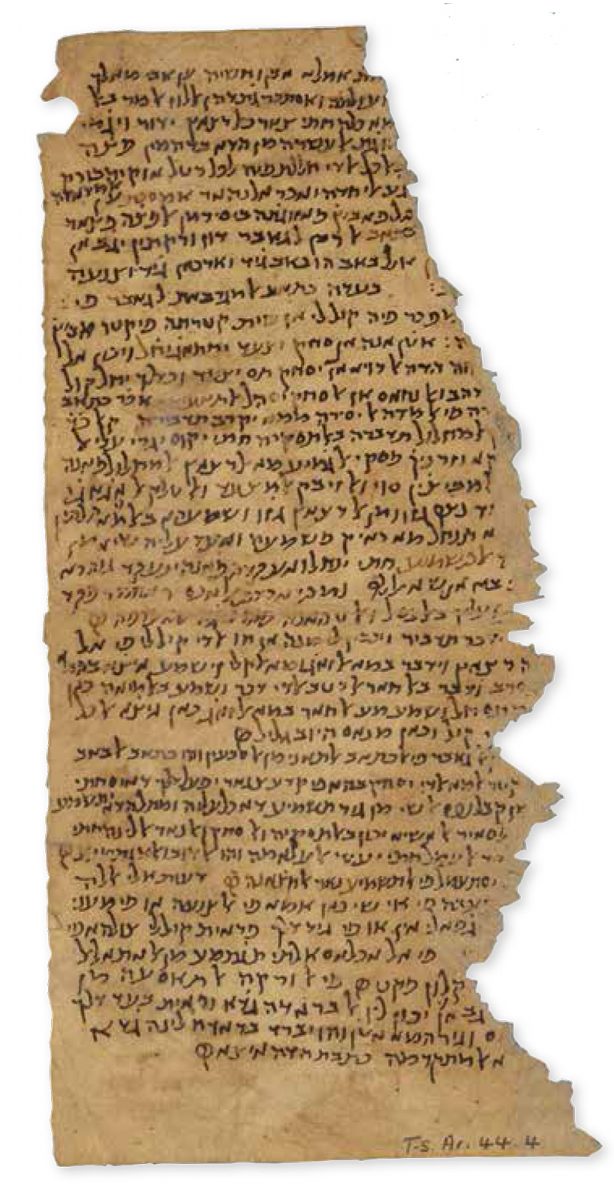 Treasures from the world’s largest and most important collection of medieval Jewish manuscripts – chronicling 1,000 years of history in Old Cairo – have gone on display in Cambridge today for a six-month-long exhibition at Cambridge University Library.

Discarded History: The Genizah of Medieval Cairo opens to the public on April 27 and provides a unique and unparalleled window into the daily life of men, women and children at the centre of a thriving city over the course of a millennium.

From the 9th to the 19th century, the Jewish community of Fustat (Old Cairo) deposited more than 200,000 unwanted writings in a purpose-built storeroom in the Ben Ezra synagogue. This sacred storeroom was called the Genizah. A Genizah was a safe place to store away any old or unusable text that, because it contained the name of God, was considered too holy to simply throw out.

But when the room was opened in the late 19th century, alongside the expected Bibles, prayer books and works of Jewish law – scholars discovered the documents and detritus of everyday life: shopping lists, marriage contracts, divorce deeds, a 1,000-year-old page of child’s doodles and alphabets, Arabic fables, works of Muslim philosophy, medical books, magical amulets, business letters and accounts. Practically every kind of written text produced by the Jewish communities of the Near East throughout the Middle Ages had been preserved in that sacred storeroom.

Dr Ben Outhwaite, Head of the Genizah Research Unit and co-curator of the exhibition, said: “This colossal haul of writings reveals an intimate portrait of life in a Jewish community that was international in outlook, multicultural in make-up and devout to its core; a community concerned with the very things to which humanity has looked for much of its existence: love, sex and marriage, money and business, and ultimately death.

“The Genizah collection is undeniably one of the greatest treasures among the world-class collections at Cambridge University Library.  We have translated most of these texts into English for the first time – and most are also going on display for the first time, too. With Discarded History we hope to make this medieval society accessible and recognisable to a modern audience.”

Among the highlights going on display in Cambridge are the earliest known example of a Jewish engagement deed (Shtar Shiddukhin, from 1119), showing the complex legal relations that existed around marriage, the oldest-dated medieval Hebrew manuscript (a Bible from 9th century Iran) and an 11th century pre-nuptial agreement where the groom, Toviyya – who clearly had a bad reputation – was forced to make a series of promises about his future behaviour.

In the presence of witnesses, he declares that he will avoid mixing with the wrong sort, for the purposes of ‘eating, drinking or anything else’. He also states that he will not spend one night away from Faiza, unless she wants him to, and that he will not buy himself a slave girl, unless Faiza agrees.

The existence of the Cairo Genizah was first brought to the attention of Western scholars by the fearless and intrepid travellers Agnes Lewis and Margaret Gibson In 1896. The twin sisters, devout Presbyterians who had inherited a great fortune, returned to Cambridge from a research trip to Egypt and Palestine. They brought with them a treasure lost for a thousand years: a page from the original Hebrew book of Ben Sira, accumulated along with thousands of other documents in the Ben Ezra Synagogue.

Cambridge lecturer Solomon Schechter was so excited by the sisters’ remarkable discovery that he raised the money to travel to Old Cairo to see for himself what the Genizah held – although not before swearing the twins to secrecy about the nature of their discovery, lest a rival scholar from Oxford be alerted to their existence.

Upon arrival in Cairo, the Chief Rabbi of Egypt gave Schechter permission to take whatever he liked. Schechter declared that he ‘liked all’, and shipped almost 200,000 manuscripts back to Cambridge.

The material that arrived in Cambridge, packed in wooden crates, dates from a period when 90 per cent of the world’s Jews lived in Islamic lands. The broadly tolerant regime under which they lived contrasted with the usually harsher treatment meted out to Jews in Western Europe. The documents paint a picture of economic stability and social growth. Cheques for goods ranging from wax candles to lemon sherbet pay testament to the variety and richness of the 200,000 documents in Cambridge’s possession – almost all of which have been conserved to avoid any further damage to the priceless collection.

“Women and children are invisible in most archives – especially those from medieval times,” added Outhwaite. “But through our collections, myriad individual voices can be heard through children’s copy books, prenuptial agreements and books of magic spells.

“The Cairo Genizah speaks vividly of the community’s links to other lands and other faiths. Its fragile contents, brown with age when Schechter acquired them, give us a picture of life that includes piracy and human trafficking to the intimate drama of domestic life. We can read about ancient cures for headaches and see school teachers complain bitterly about children’s unruly behaviour, just as they do today. It’s this richness that makes the Genizah unique.”