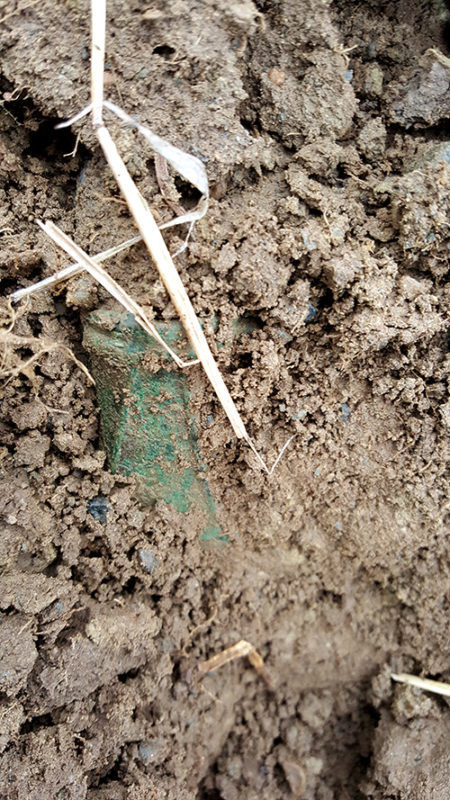 With the help of six private metal detector hobbyists

Some 3,000 years ago, 24 axes were cached in Stjørdal municipality, about 44 km east of Trondheim. They ’re now seeing the light of day once again.

In late April, a sensational discovery was made in a field in the village of Hegra, not far from the Trondheim International Airport in Værnes. Numerous axe heads, a knife blade and some fragments were lifted out of obscurity. The objects date back to the Late Bronze Age, approx. 1100-500 BCE.

Archaeologists from the Norwegian University of Science and Technology’s (NTNU) University Museum and Nord-Trøndelag County Council unearthed the findings with the help of six private metal detector hobbyists from the area.

Brothers Joakim and Jørgen Korstad from Stjørdal municipality made the first discoveries on this field in January this year. They found nine socketed axes (also called Celts), a spearhead, a casting mould, and a fragment of a possible bronze lur. The metal detector hobbyists contacted county archaeologist Eirik Solheim, who says that the brothers did everything right in the process of informing him about the finds.

Between the two searches, the Hegra find now consists of 30 Bronze Age artefacts.

“The 24 axes are a particularly special part of this discovery. There have never been so many axes in a single deposit before in Norway, and they’re rare in the Scandinavian context,” says archaeologist and researcher Merete Moe Henriksen in NTNU’s Department of Archaeology and Cultural History.

Archaeologists call this kind of find a hoard, when they uncover objects that have been hidden away or buried in the ground. It is still too early to say why the axes and other objects were buried 3000 years ago.

“There may have been religious reasons linked to a sacrifice, or they might have been cached temporarily, with the intention of recasting the metal later. This was a known practice in the Late Iron Age,” says Henriksen.

Stjørdal municipality is one of the areas in central Norway that has a concentration of ancient rock art and rock carvings. Solheim has wished for a museum to showcase the rock art of the area.

“We know that there’s been a lot of activity in this area, but we’ve lacked artefacts. Now this shows up and it’s infinitely more than we could have asked for. It’s so spectacular and totally cool,” he says.

Archaeologists hope to get in one more excavation of the Hegra field this fall. This would help them to better understand the context of the findings, which would hopefully reveal more about why the objects were cached.