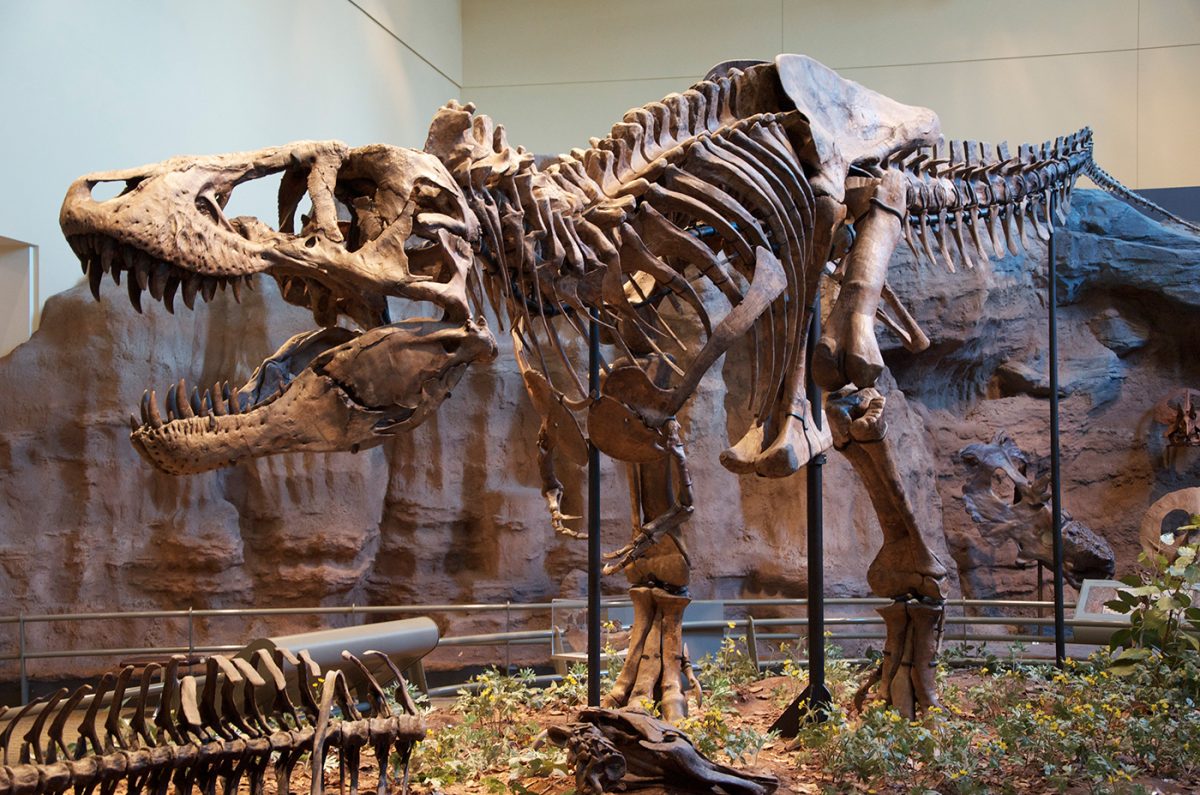 The giant Tyrannosaurus rex pulverized bones by biting down with forces equalling the weight of three small cars while simultaneously generating world record tooth pressures, according to a new study by a Florida State University-Oklahoma State University research team.

In a study published today in Scientific Reports, Florida State University Professor of Biological Science Gregory Erickson and Paul Gignac, assistant professor of Anatomy and Vertebrate Paleontology at Oklahoma State University Center for Health Sciences, explain how T. rexcould pulverize bones — a capacity known as extreme osteophagy that is typically seen in living carnivorous mammals such as wolves and hyenas, but not reptiles whose teeth do not allow for chewing up bones.

Erickson and Gignac found that this prehistoric reptile could chow down with nearly 8,000 pounds of force, which is more than two times greater than the bite force of the largest living crocodiles — today’s bite force champions. At the same time, their long, conical teeth generated an astounding 431,000 pounds per square inch of bone-failing tooth pressures.

This allowed T. rex to drive open cracks in bone during repetitive, mammal-like biting and produce high-pressure fracture arcades, leading to a catastrophic explosion of some bones.

“It was this bone-crunching acumen that helped T. rex to more fully exploit the carcasses of large horned-dinosaurs and duck-billed hadrosaurids whose bones, rich in mineral salts and marrow, were unavailable to smaller, less equipped carnivorous dinosaurs,” Gignac said.

The researchers built on their extensive experience testing and modeling how the musculature of living crocodilians, which are close relatives of dinosaurs, contribute to bite forces. They then compared the results with birds, which are modern-day dinosaurs, and generated a model for T. rex.

“Having high bite force doesn’t necessarily mean an animal can puncture hide or pulverize bone, tooth pressure is the biomechanically more relevant parameter,” Erickson said. “It is like assuming a 600 horsepower engine guarantees speed. In a Ferrari, sure, but not for a dump truck.”

In current day, well-known bone crunchers like spotted hyenas and gray wolves have occluding teeth that are used to finely fragment long bones for access to the marrow inside — a hallmark feature of mammalian osteophagy. Tyrannosaurus rex appears to be unique among reptiles for achieving this mammal-like ability but without specialized, occluding dentition.

The new study is one of several by the authors and their colleagues that now show how sophisticated feeding abilities, most like those of modern mammals and their immediate ancestors, actually first appeared in reptiles during the Age of the Dinosaurs.