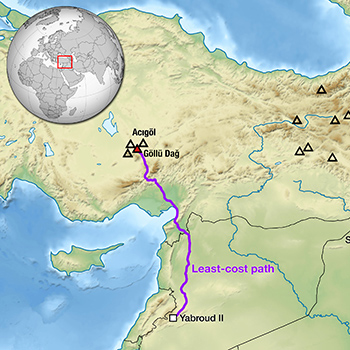 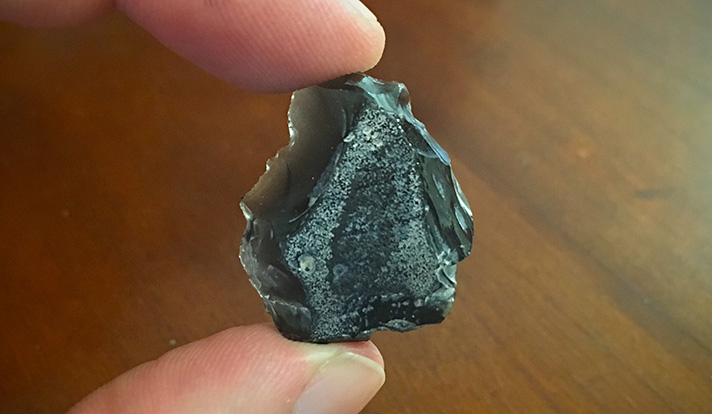 The obsidian scraper was excavated in southern Syria during the 1930s

A new analysis of an obsidian scraper excavated in southern Syria during the 1930s demonstrates that, shortly after Neanderthals disappeared, modern humans covered far greater distances than previously known, according to archaeologists from Yale University and the University of Cologne.

German archaeologist Alfred Rust discovered the scraper at a cave site near Yabroud, a town located in Syria’s Sifta Valley, in the same archaeological layer as hundreds of other stone tools dating to 30,000 to 40,000 years ago. It was the only artifact Rust collected at the site made of obsidian, a type of volcanic glass.

The researchers chemically matched the obsidian to a volcano in central Turkey, which shows that the object was transported at least 700 km to reach the cave during a period when archaeologists believe anatomically modern humans had finally displaced Neanderthals in the Middle East.

“The general assumption is that the stone tools from this period were locally produced, suggesting people weren’t moving far, and it takes exotic material like obsidian to show up in the archeological record and reveal that is not necessarily the case,” said Ellery Frahm, director of the Yale Initiative for the Study of Ancient Pyrotechnology and co-author of the study. “Our analysis shows that obsidian from central Turkey had traveled to southern Syria. Movement of this scale had not appeared in the archaeological record until 20,0000 years later.”

Previously, the earliest appearance of obsidian in the archaeological record in the Levant — the region composed of southern Syria, Lebanon, Israel, and Jordan — dated to between 10,000 and 15,000 years ago, not long before people began herding animals, farming, and producing ceramics, said Frahm.

The chemical analysis of the scraper was performed using X-ray fluorescence — a non-destructive means of discerning an artifact’s elemental fingerprint. The scraper’s chemical composition was compared to obsidian samples from volcanoes throughout the southwest Asia, including in Armenia, Georgia, and Turkey. Its chemical makeup matched that of obsidian from found at the Göllü Dağ volcano in central Turkey.

It is unclear how long the scraper took to cover the 700-km distance from Turkey to Syria or how many times it exchanged hands during the trip, said Frahm, who co-authored the study with Thomas Hauck of the Institute for Prehistory at the University of Cologne.

“It had to move fast enough that it was still useful across that long distance,” he said, noting that the scraper was badly worn. “This was sharpened a lot. It’s used up and was discarded.”

The findings show that early humans moved in networks over significant distances and suggest that some portion of other artifacts, including stone tools collected at the Yarbroud site, likely travelled over similarly long distances.

Frahm said the scraper, which is roughly the size of a checkers piece and likely was used for a variety of cutting and scraping activities, had been overlooked by researchers or dismissed as an object mistakenly mixed up with much older artifacts.

The researchers confirmed the artifact’s provenience through the Yale Babylonian Collection, which houses a copy of Rust’s original excavation report. The report, published in 1950, includes a description of the obsidian scraper as well as an illustration, showing that it was found in the same layer as hundreds of stone artifacts that match other sites dated from 30,000 to 40,000 years ago.

“Having access to a copy of Rust’s original report was invaluable,” Frahm aid. “It confirmed that the obsidian tool is not something that somebody put in the wrong drawer decades ago.”

The study was published in the June 2017 edition of the Journal of Archaeological Science.