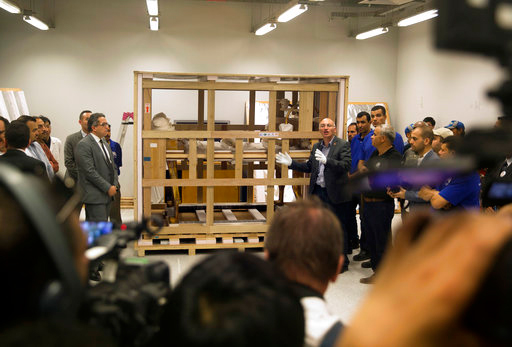 Tutankhamun’s funerary bed and chariot were safely moved on Tuesday evening from the Egyptian Museum in central Cairo to the Grand Egyptian Museum across the city. The new museum, scheduled to open partially in 2018, will house a large collection of the ancient monarch’s items.

The two gold-plated pieces were the first of many masterpieces found in the boy king’sn tomb.

The items were transferred well packed in large sealed wooden boxes in two trucks (equipped with devices to measure humidity, heat and vibrations), escorted by police vehicles, crossing a distance of about 22 kilometers.

Upon their arrival to the site of the museum, the artifacts were unwrapped by technicians wearing white gloves and placed in a restoration room. The items will be kept there until they adapt to the new atmospheric conditions.

“During the next weeks and months we’re going to transfer regularly more than 1,000 remaining objects in Cairo museum to be restored and prepared for the exhibition here in the first half of 2018,” said Antiquities Minister Khaled al-Enany.

The Grand Egyptian Museum will house about 100,000 artifacts spanning the pre-dynastic era up until the Greco-Roman period.