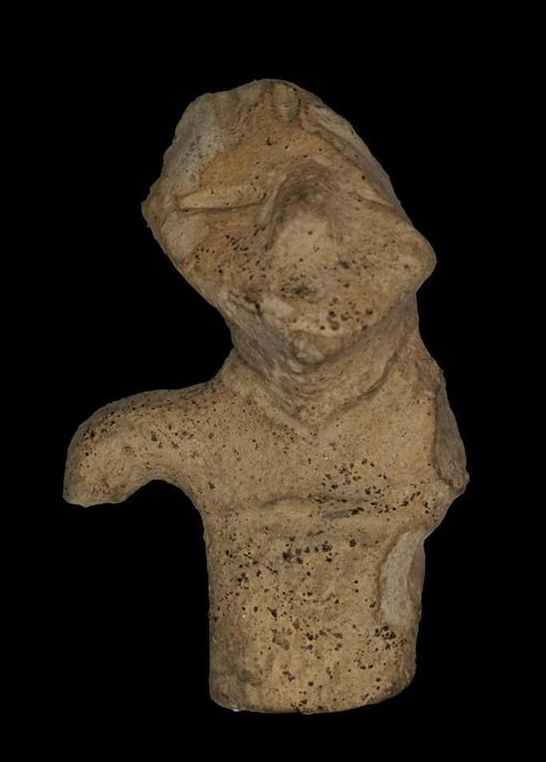 In the village Kosina in Podkarpacie

While walking in a field in one of the villages of Podkarpacie, an archaeologist from Wielkopolska came across a fragment of a clay figurine from around 7 thousand years ago, depicting a man. This is one of the few finds of this type from this period in Poland, the finder believes.

Archaeologist Piotr Alagierski spent his vacation in the village Kosina in Podkarpacie. On a Sunday walk in a cultivated field, he stumbled upon a 7-centimeter fragment of a man figurine made of fired clay. Most of the clearly shaped head, torso and part of the hand have survived to our times, according to the information provided to PAP by the finder.

“There is no doubt that this is a national-level monument — one of the oldest depictions of a human in our country. Similar finds from that period are very rare,” the archaeologist noted in an interview with PAP. “The style in which the figurine was made is surprising. It resembles similar figurines from Slovakia and Romania,” he explained.

The figurines of this period previously discovered in Poland were made in a more schematic way. In general, the sexual parts—breasts—were also accentuated.

“It is different in this case. The details of the head are clearly modelled—the hair, the nose, the chin are visible. There is a visible indentation on the chest, probably representing a garment, a tunic perhaps. A necklace is visible on the neck,” Alagierski said. Contrary to the few figurines from this period previously found in Poland, this one does not have prominent sex features.

“In the field around the figurine I also noticed large quantities of fragments of ceramic vessels and obsidian, volcanic glass, which is produced by the instantaneous cooling of the lava. This material is also known from the areas of Poland’s neighbouring countries: Ukraine and Slovakia,” Alagierski added.

According to him, the place where he found the figurine was a settlement of the first farmers living in the lands of today’s Poland, which means that the figurine is about 7 thousand years old.

The archaeologist intends to start excavations at the site, in order to explore the context of the discovery and confirm that there had been a settlement there once. Regarding the figurine, expert chemical analyses are planned. They will allow scientists to determine the origin of the clay used to make the figurine. “We can not rule out that the figurine was brought here from behind the Carpathians,” Alagierski pointed out.

On Tuesday the figurine was handed over to the Voivodeship Office of Monuments Protection in Rzeszów.