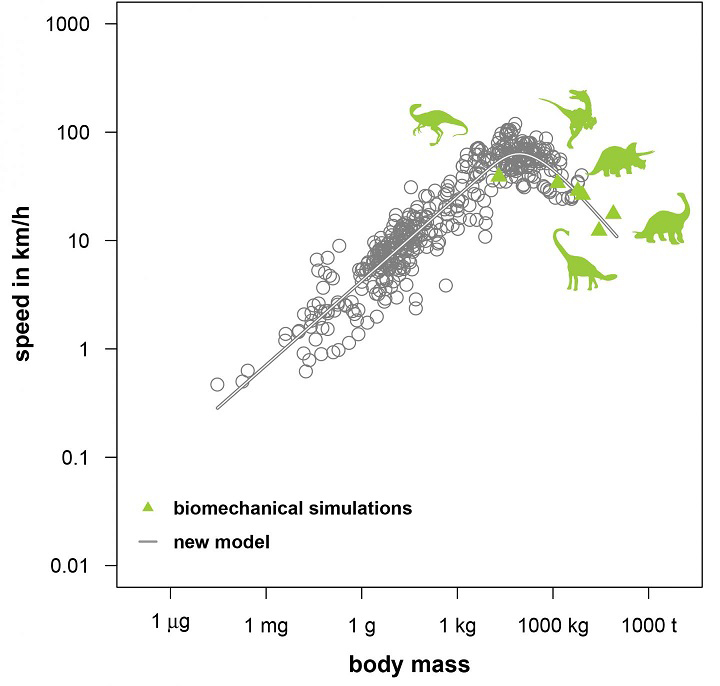 Why Tyrannosaurus was a slow runner

Researchers have developed a simple mathematical model to answer this question

A research team under the direction of the German Centre for Integrative Biodiversity Research (iDiv) and the Friedrich Schiller University Jena have now described why the largest animals are not the fastest. They have managed to do so thanks to an amazingly simple mathematical model. The only information that the model must ‘be fed’ with is the weight of a particular animal as well as the medium it moves in, so either land, air or water.

On this basis alone, it calculates the maximum speed that an animal can reach with almost 90% accuracy. “The best feature of our model is that it is universally applicable,” says the lead author of the study, Myriam Hirt of the iDiv research centre and the University of Jena. “It can be performed for all body sizes of animals, from mites to blue whales, with all means of locomotion, from running and swimming to flying, and can be applied in all habitats.” Moreover, the model is by no means limited to animal species that currently exist, but can be applied equally well to extinct species.

“To test whether we can use our model to calculate the maximum speed of animals that are already extinct, we have applied it to dinosaur species, whose speed has up to now been simulated using highly complex biomechanical processes,” explains Hirt. The result is that the simple model delivered results for Triceratops, Tyrannosaurus, Brachiosaurus and others that matched those from complex simulations – and were not exactly record-breaking for Tyrannosaurus, who reached a speed of only 27 km/h (17 mi/h).

“This means that in future, our model will enable us to estimate, in a very simple way, how fast other extinct animals were able to run,” says the scientist.

Two assumptions are the basis of the model. The first assumption is related on the fact that animals reach their maximum speeds during comparatively short sprints, and not while running over long distances. Unlike running over longer distances, where the body constantly resupplies the muscles with energy (aerobic metabolism), sprinting uses energy that is stored in the muscles themselves but which is exhausted relatively quickly (anaerobic metabolism).

It seems logical enough: the larger the animal, the more muscle it has – and thus the faster it can sprint. However, Newton’s laws of motion also apply in the animal kingdom, we know mass has to overcome inertia, and so a five-tonne African elephant simply cannot start moving as quickly as a 2.5-gramme Etruscan shrew. By the time large animals such as the elephant get up to full speed while sprinting, their rapidly available energy reserves also soon run out.