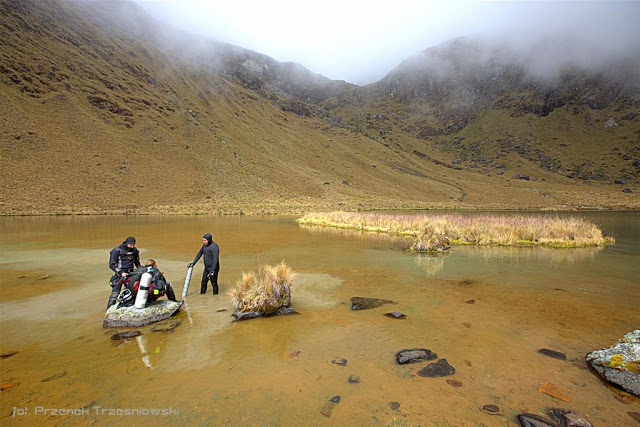 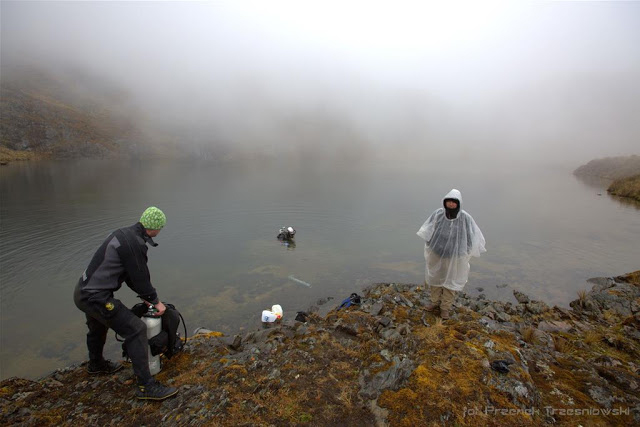 Polish scientists searched for traces of the Inca ritual activity in three lakes in the Machu Picchu region of Peru—at an altitude of over 4100 m above sea level. On the shores of the lakes there are ceremonial platforms, from which sacrificial offerings were probably made during rituals.

Particularly two of the lakes surveyed this year—Soctacocha and Yanacocha—are very interesting for researchers. They are located in the vicinity of the well known Inca trail Camino Inca that connects numerous archaeological sites with the famous rock city of Machu Picchu. In times of splendour, more than 500 years ago, the city was surrounded by many temples and settlements. Currently it is the protected area of Machu Picchu National Park and a very popular tourist route.

“We were convinced that it was worth exploring deep into the lakes already during the reconnaissance. It turned out that in both cases there were ceremonial stone platforms by the lakes. Sacrificial offerings were probably made from these platforms during rituals”, said research expedition leader, diver and archaeologist Dr. Maciej Sobczyk from the Center for Precolumbian Studies of the University of Warsaw. In addition Dr. Sobczyk, Mateusz Popek and Przemysław Trześniowski are also members of the team of underwater archaeologists.

The platforms themselves will also be studied by archaeologists. It is possible that since they were cult-related structures, there could be foundation deposits (sacrificial offerings made at the time of construction). Sometimes the dead would also be buried underneath such structures.

All the lakes are found at the foot of the Salkantay Glacier, which was the object of worship of the former inhabitants of the Andes. According to the archaeologists, they played an important role in the Inca beliefs – llamas and alpacas, the animals that played and still play an important role in the economy of the Andes, were believed to have emerged from them in the old days. What could the Incas sink during religious celebrations? It is known that the Incas immersed stone boxes filled with gold and silver figurines in the Lake Titicaca on the border of Peru and Bolivia.

Archaeologists have high hopes for what may be hidden in the bottom of the lakes Soctacocha and Yanacocha. During their initial research, they used sonar to create bathymetric maps. Divers took a several centimetres core sample from one of the lakes – the layers of mud that had settled over millennia. By analysing the sample, scientists will not only learn the history of lakes, but also determine the environmental conditions in the area surrounding the reservoirs.

“This year’s work was a big logistical challenge. Due to the difficult terrain, all equipment and supplies had to be delivered to the main camp using mules, and then, due to the steep trails, getting to the place of work took more than two days”, recalls Dr. Sobczyk. There was also an unfortunate accident – one of the transport animals fell from the slope.
Last year, archaeologists from the Center for Precolumbian Studies of the University of Warsaw inaugurated pioneering research in water reservoirs located in the Peruvian National Park of Machu Picchu. They surveyed four different lakes, including Humantay. This year, the researchers returned to verify previously identified potential traces of human activity and test equipment designed specifically for the expedition. Despite reaching the bottom at the depth of 20 m, researchers failed to discover traces of ancient rituals.

The lakes studied by the Polish archaeologists are not only at very high altitudes, they are also very deep. This carries a high risk for divers – no sonar or archaeological diving has ever been done at such altitudes.

Deep diving in Humantay has also allowed scientists to collect Doppler data, which will be analysed by the National Centre for Hyperbaric Medicine in Gdynia. Dive tables and planning and diving procedures have been developed specifically for archaeologists by Dr. Jacek Kot, MD.

High-altitude underwater studies in the Peruvian Andes are carried out by the Center for Precolumbian Studies in collaboration with the Regional Department of the Ministry of Culture in Cusco, the Research Team of the Machu Picchu Park, as part of the project “The role of the satellite sites in the vicinity of Machu Picchu: Inkaraqay, Chachabamba and mountain lakes at Nevado Salkantay (Peru) “, led by Prof. Mariusz Ziółkowski. Research in the Machu Picchu National Park is funded by the Opus and Prelude grants of the National Science Centre.