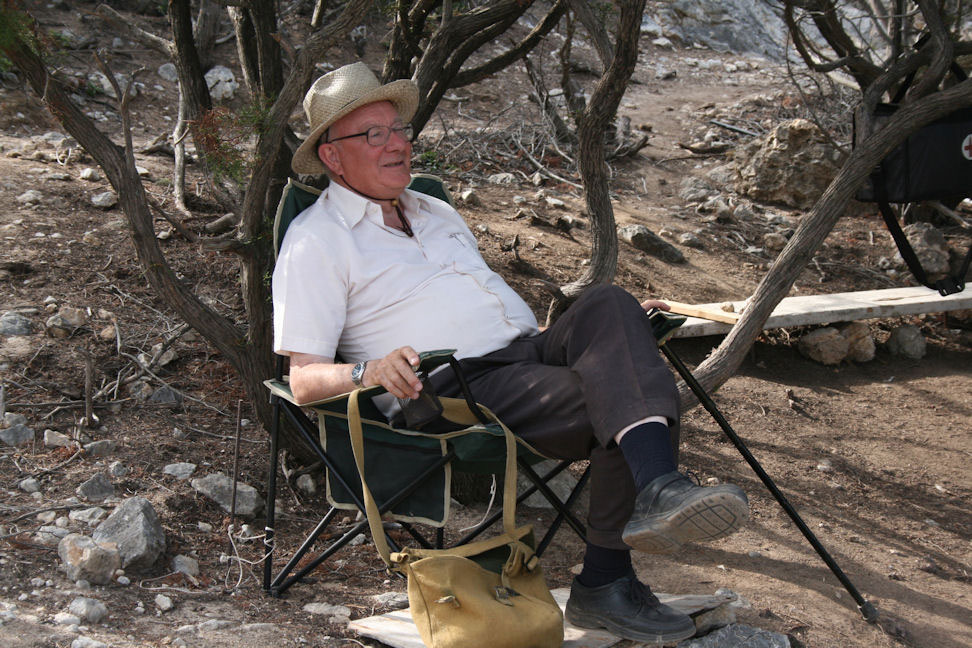 Colin Renfrew: “The museums of the world should not purchase ‘illegal’ antiquities”

Interviewed by Eleni Markou for the Athens and Macedonian News Agency

Lord Andrew Colin Renfrew, one of the most eminent archaeologists and researchers, who recently celebrated his 80th birthday, is in no need of a special introduction. Particularly in Greece which he has visited countless times, having excavated many sites, mainly in the Cyclades, while at the moment he is in this country to continue the excavations he is jointly heading on Keros, the most ancient island sanctuary known in the world.

On the occasion of the above, the Athens and Macedonian News Agency had the honour of talking to him both about his research, as well as matters that are of special interest to Greece, such as the return of the Parthenon Marbles and the illegal trafficking of antiquities.

Below is the full text of Lord Andrew Colin Renfrew‘s interview to Eleni Markou for the Athens and Macedonian News Agency.

Q: “A life in archaeology” was the title of your 80th birthday tribute that took place this July in Cambridge, at the McDonald Institute for Archaeological Research of which you are the founding director. How many years can be “counted” in that life and which do you consider as its first most significant landmarks?

Α: I started at the age of 13, when during the school holidays I took part in excavations in Canterbury, a very important site of the Roman era, which in later years became the seat of the Church of England. If you include those, I have been digging almost 67 years. The first important landmark was when I went to Cambridge University on a scholarship to read Natural Sciences and two years later, having realized my great interest in archaeology, I decided to change my direction of studies. Another very good experience was when, still a student, I visited Greece for the first time as an archaeologist for the excavations at Nea Nikomedeia, near Veria. They were the first I conducted in this country; a very special moment doing research at a spot that for a while was the earliest known Neolithic site in Greece.

Q: Do you owe your connection to Greece only to archaeology?

Α: It certainly started that way. Of course the moment I arrived I loved Greece a lot, mainly when I started working in the Cyclades. They are marvelous places and I really love traditional life there. For example, in Apeiranthos on Naxos, I got to know the life and culture of the Cyclades, learnt Greek and danced traditional dances. I have greatly enjoyed meeting interesting people, especially local farmers. I cannot forget my first visit to Naxos, when I went to Moutsouna, to the east of the island. A local peasant courteously led me south on his donkey, since in those days it was very difficult to reach because there was no road. That’s how I got to visit archaeological sites, cemeteries and other things. It was a very pleasant experience travelling 2-3 days on a donkey with this man who knew the region well and so I got to know real rural Greece better.

Q: Keros, where you have conducted excavations in the past and continue today, is one of the most enigmatic sites in the Aegean and possibly in the world. According to your statements, you believe it to be “the earliest island sanctuary in the world.” On what do you base this theory?

Α: I believe it, perhaps because we do not know of any earlier island sanctuaries and of course we can only talk about what we know. Most sanctuaries of symbolic and sacred significance are on the mainland. The most ancient known sanctuary in the world is that of Gobekli Tepe in southeastern Turkey, but it is situated very far from the sea and naturally it is not on an island. There are other island sanctuaries in the world, but none as old as that of Keros.

Α: We have good radiocarbon dating for our excavations on Dhaskalio, the little island next to Keros to which it was probably joined by a passage way in prehistoric times (approximately 2500 BC). We are investigating this passage way in our recent excavations. What’s more, the settlement on Dhaskalio, to date the most ancient on Keros, was established probably around 2700 BC, inhabited till 2000 BC and then abandoned. The islet of Dhaskalio was not used again, apart from a Byzantine chapel being erected there, most likely around the 10th century AD and which subsequently fell into ruins and was destroyed.

Q: How important are the findings of Keros?

Α: I believe them to be very important because gradually we start to understand the Dhaskalio settlement a little better and the deposits exactly opposite, in the Kavos of Keros. And it was certainly very thrilling when last year we dug in the area of the now submerged passageway and, of course when we “struck” land on Dhaskalio and found a man made path with steps leading to the islet.

In previous excavations, we also located a large building on Dhaskalio, as well as the sanctuary in the Kavos with hundreds of sherds of already broken Cycladic figurines and vases. Not a single sherd was found in the Dhaskalio settlement. There is a clear pattern and we are gradually trying to reconstruct the sanctuary’s history that must have been very important for the Cyclades, where pilgrims came periodically and made offerings of broken marble figurines and vases, perhaps towards the end of their use, which we believe were broken elsewhere.

Q: Have you found sherds that are joined together?

A: We have done a lot of research on that; we found some pieces that are linked to each other, but very few in all. Approximately 10% of these are joined to others, most often a foot to a tibia, but beyond that nothing else. That is why we say they must have been broken elsewhere. At first we thought this had happened at some spot in the Kavos, but that is not the case. We have come to the conclusion that they must have been broken on their islands where the sculptures were in use and parts of them brought to the Kavos of Keros.

Q: You were one of the first archaeologists to go to Keros in the 60s, when the island was plagued by antiquities trafficking. How much did this ugly image contribute to your actively raising public awareness in combating this?

Α: You are right; I was very upset. When I was in the Cyclades, I used to visit plundered Cycladic cemeteries where everywhere one saw traces of grave looting. And of course the museums of the world are full of Cycladic material that in most cases was exported illegally from Greece. So from early on in the Cyclades I became well aware of the great damage that had been done and you are right, the picture of the plundered deposits in the Kavos is very sad; so much information to have been lost. That is the real tragedy. Even if some of the, very likely, illegally exported sculptures were sent to various museums of the world, the information they would have given us is lost forever.

Q: Why is the problem of antiquities trafficking not being solved, despite efforts made from time to time?

A: Money. It’s as simple as that. Cycladic figurines and other sculptures, vases and artefacts from prehistory and early history of the world are sold at auctions all over the world (New York is one of the biggest of such centres) and as you know Cycladic figurines can fetch millions of dollars.

When such amounts of money are at stake, dishonest traders inside and outside Greece will sell them on the black market. It is not strange that when poor farmers are offered money for sculptures they found on their land that they should sell them, although they will receive less money than what the trader then sells them for. Because these figurines can be found in cemeteries in various parts of the Cyclades and in Crete of course, it is very difficult for the authorities to have control, even when they try very hard to do so.

Q.: Can a solution be found?

Α:  Not an easy one. I think the main one would be for museums to agree not to buy antiquities or accept as gifts those that have been exported illegally from their countries of origin after 1970, the year set by the UNESCO convention. If this convention is really followed then I believe that the prices of antiquities in the markets and auctions will fall, because there will be less demand for them, since museums will not accept them despite private collectors still purchasing them. But unfortunately we are not close to such an agreement.

Some of the bigger museums of the world now agree to follow such a practice, but new museums springing up in Japan and the Middle East do not have a clear ethical policy and still pay large sums of money for antiquities. The same problem applies to antiquities from Mexico and South America. Private collectors pay money for the artefacts and give them to museums, receiving praise and gaining prestige, when the opposite should be the case. That is the problem.

Q: Are you in favour of the Parthenon Marbles being reunited?

We know that of course they will not be placed on it, but the New Acropolis Museum has done a marvelous job in presenting the authentic sculptures while at the same moment you can see the Acropolis itself through the windows. I believe however that an international agreement should be drawn up; we do not want to see all the world museums emptied of their artefacts. Nevertheless, the return of sculptures to their monuments is really a very strong issue.

Q: Do you believe that the great publicity given at times to this issue (e.g. the intervention of the Clooney couple) is good for the cause?

Α: No, I do not. It was as if the whole issue mainly concerned the famous couple and the fact that Mr. Clooney married a very beautiful woman, which does not seem to me to be very relevant with the issue of the Marbles. I do not believe that such type of publicity helps, as I did not agree with the manner Melina Mercouri had handled the issue by going to England, visiting the British Museum etc. She did in fact create a lot of publicity. I do not think she herself initially knew very much about the Marbles, although subsequently she made a point of learning about them. It is preferable for governments to make serious efforts in encouraging museums to establish international agreements concerning cases of antiquities such as the ones I referred to before.

Q.: It was recently proposed to link the issue of the reunion of the Marbles with that of Brexit. How much in favour are you of such a choice?

Α: How can these two be linked? I find it utterly ridiculous. Brexit is a very big issue and the Parthenon Marbles is a different one. I can see no connection between them and believe the proposal to be as senseless as Mrs. Clooney’s “trip” to the Acropolis.