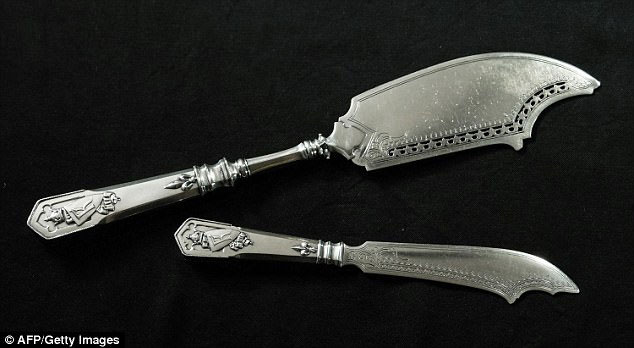 Art historians had thought them lost

Everyone believed that after the October Revolution the silver knives had been melted in the foundry, like the rest of Fabergé silver tableware. Yet, two knives, made by the famous Russian goldsmith of the Imperial court, turned up a century later, in Poland.

After 1917, New Bolshevik Russia needed money for the war and to establish its power. It “nationalized” assets, of the Tsars, the aristocracy, bourgeois families and the church.

Plates, cups, cutlery, marvelous pieces of goldware were taken to the foundries to be melted for the state to take the precious metals. The same fate was reserved for the silver table set comprising more than 100 pieces belonging to the hugely wealthy Kelkh family who had ordered it at Fabergé.

Art historians thought that all the table set had been lost. Two pieces however appeared recently on the market: “two fish knives – a 35cm knife from the set and a 21cm individual one were miraculously saved”, says Adam Shimansky, Polish art historian and specialist in the works of Fabergé, who discovered the knives.

In 1918, a Red Army soldier kept the two knives, adds Shimansky, which belonged to a unique table set in the Neo-Gothic style, one of the few works made by Faberge in that style which was still fashionable at the end of the 19th century.

The knives’ story has its beginnings in 1900. Barbara Lelch-Bazanova, heiress to one of the greatest fortunes of the era, ordered a table set for the then significant sum of 125,000 rubles from Fabergé, a Russian goldsmith of German and Danish origin, well known for his mythical creations: eggs of gold, decorated with semiprecious stones that contained different miniatures (a ballerina, coach, castle, ship, horse, parrot…). Today they sell for astronomical sums of money.

Tsar Alexander III had ordered the first egg from Peter Karl Fabergé for his wife Maria Fyodorovna. She was so thrilled with the jeweller’s miniature that she appointed him “goldsmith to the imperial crown”.

Fabergé would make 52 imperial eggs for the Romanovs, 7 for the Kelkh, all delicately decorated in different styles, mainly the Rococo, as well as that of Louis XVI and Empire.

As for the specific knives “there is no doubt that the letter K they bear is the Fabergé stamp and the signature K. Fabergé in the Cyrillic alphabet is very distinct”, points out the Polish art historian. Evidence that supports this finding are the rare photographs of the table set taken in 1902, during the exhibition of works by Fabergé, organized at the time by Tsarina Alexandra Fedorovna, wife of Nicholas I.

As for the soldier, he received the two knives as payment for his work- he had helped to melt the tableware – explains the expert. In 1921 he, the soldier, sold it with some other items to a Polish doctor, Joseph Volsky, who lived in Galicia, a province shared today between Poland and Ukraine. The knives remained in the same family for almost a century, before being sold in 2016.

The new owner, a Polish collector, asked Shimansky to examine them. And after learning that they were genuine pieces from the famous Fabergé table set, he put them in a safety deposit box in his bank.

According to Shimansky, an American collector is offering one million euros and a Russian customer has also expressed an interest.

As for the House of Fabergé, it was nationalized by the Bolsheviks in 1918. Fabergé himself died at the age of 74 in 1920, an exile in Lausanne. Four years later, his sons Alexander and Eugene founded the Fabergé Company in Paris, but their “Fabergé Paris” goldsmith and jewellers store did not have the same success. The Fabergé brand was then sold and used mainly for perfumes.