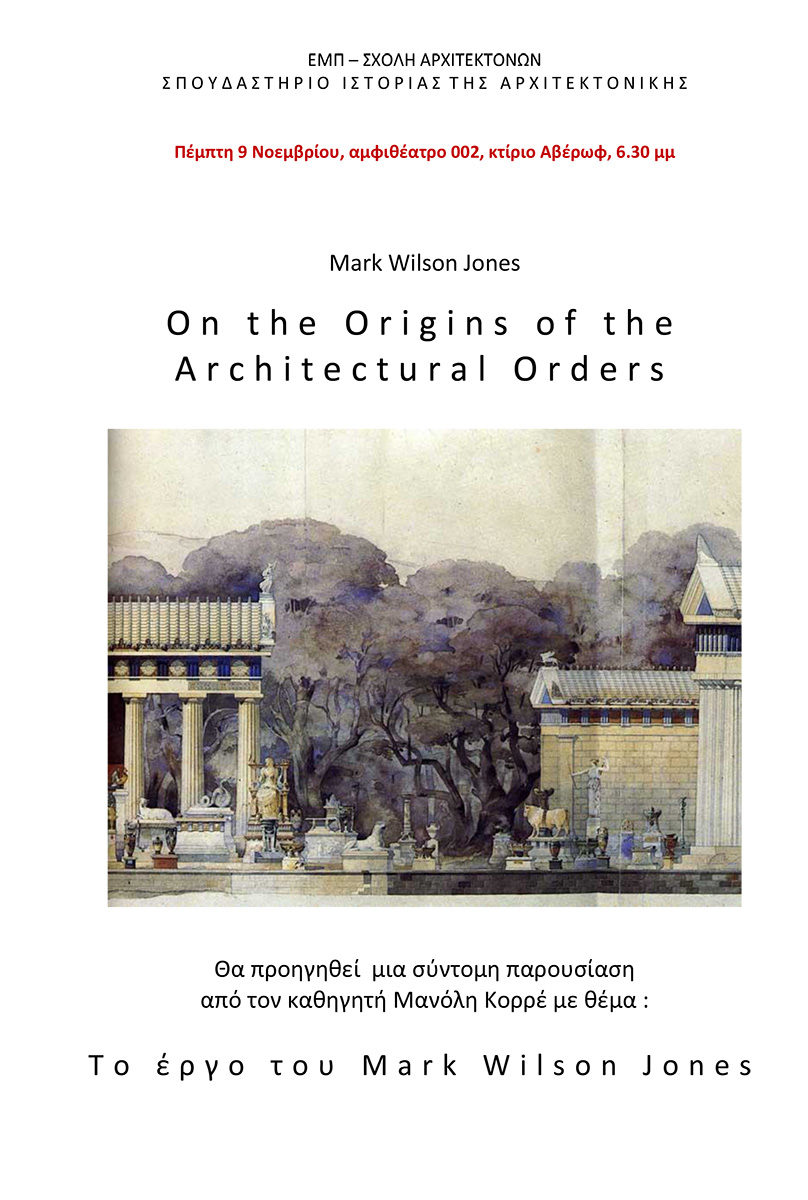 On the Origins of the Architectural Orders

Mark Wilson Jones will give a lecture on the origins of the architectural orders, tomorrow, Thursday, November 9, 2017, at 6.30 p.m., in the Averof Building (amphitheater 002, School of Architecture, National Technical University of Athens (Patission str. 42, Athens).

The Greek temple and its Doric and Ionic orders set the tone for the architectural culture of the western world. Much thought has been invested into trying to understand how and why these archetypes came into existence; between the mid 18th and early 20th centuries the topic preoccupied virtually every major architectural thinker, and it still remains the focus of archaeological inquiry.

Past theories of explanation have revolved around four main lines of interpretations: construction (often analyzed in terms of evolution), influences from earlier or foreign styles, visual effect, and symbolism. It is important not to overemphasize any single one of these factors, for in reality each contributed to the formation of the orders. Architecture is by definition a multifaceted enterprise.

Understanding the temple and its orders may further be progressed by investigating themes that have so far not received the attention they deserve. It is of fundamental conceptual importance that temples were more than houses for the gods, they were also offerings to them. Their votive nature helps explain the great investment given to temples, and the sudden leap in size and quality of materials that occurred in the Archaic period, not forgetting other characteristics. Temples were cut from the same cloth as other art-offerings that also inhabited Greek sacred sanctuaries. Similar forms danced back and fore between architecture, sculpture, furniture, ceramics, ivories and metalwork. The interaction between these differing arts helped propel a rapid phase of invention that resulted in stone Doric and Ionic temples. In the sanctuary context all such material constituted gifts to the gods, and so, dressed with kindred vocabularies, temples radiated a subliminal message of beauty in the service of devotion.

Mark Wilson Jones’s book Origins of Classical Architecture (Yale UP 2014) casts fresh light on such questions, with related material that goes beyond the scope of this talk.

A short presentation of the work of Mark Wilson Jones by Manolis Korres will preced the lecture.