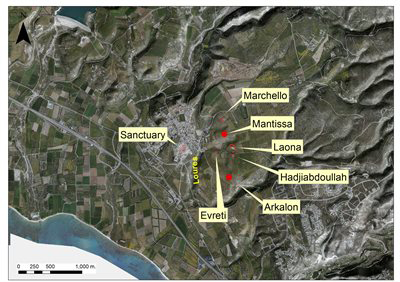 Political economy, state formation and urbanism in the land of Ancient Paphos

Professor Maria Iacovou (University of Cyprus) presents: “Political economy, state formation and urbanism in the land of Ancient Paphos”, with introduction by Gerald Cadogan (Chairman, Anglo-Hellenic League), on November 14, 2017 (at 7.00 p.m., in the Great Hall of King’s Building Strand Campus).

Twelve years, and almost twice as many field and study seasons, since the inception of the Palaepaphos Urban Landscape Project (PULP) in 2006, the megalithic temenos of a sanctuary constructed towards the end of the Late Bronze Age (c. 13th–12thcenturies BC) has reclaimed its original role in the context of the foundation and subsequent development of Ancient Paphos from seaport to city-state.

Identified from as early as the time of Homer as the sacred abode of Aphrodite, the sanctuary continues to hold pride of place as the earliest known urban monument in the entire region, and one that was evidently constructed under an early state authority, which in the Iron Age was claimed as ancestral to the Greek basileis of Paphos, the self-proclaimed Kinyradai.

Today, following an on-going intensive landscape analysis project, that extends from the coastal zone of Paphos to the southern foothills of the Troodos massif, we can claim that the sanctuary was meant to be seen from the sea, like a beacon that guided approaching commercial traffic to the original — but now invisible — port lagoon, for which Paphos was founded as one of Cyprus’s early gateways to the sea (at the same time as Enkomi on the east coast).

In addition, preliminary results of the University of Cyprus excavations on the plateau to the east of the sanctuary show that the great temenos was not isolated to the west, in what is today the silent rural landscape of Kouklia-Palaepaphos, nor was it surrounded exclusively by extensive burial sites. In the Late Bronze Age, the plateau held at least one ashlar-built secular edifice; in the Iron Age, under the dynasty to which king Timarchos and his celebrated son Nikokles belonged, it apparently served as the Cypro-Classical citadel of the polis of Paphos. The 5th and 4th century urban investments include an amazingly well-preserved, purpose-built industria-cum-storage complex that extends for over 65 metres along the north side of the citadel wall.  Across from it, a rampart with staircases leading to towers, whose construction dates to the beginning of the 5th century BC, was preserved under a strange mound that rises to 10 metres above the natural surface of a low hill known locally as Laona. So far unparalleled in the cultural profile of ancient Cyprus, the Laona tumulus has yet to reveal under whose authority it was constructed, and for what purpose.

Maria Iacovou is Professor of Prehistoric and Protohistoric Archaeology in the Department of History and Archaeology, University of Cyprus, a post she has held since 2008.

She received her PhD from the University of Cincinnati in 1984, and in 1986 she was postdoctoral fellow at the Institute of Classical Studies, University College London. Before her election to the University of Cyprus in 1998, she served for a decade as Director of the Bank of Cyprus Cultural Foundation.

She is the founder and research director (since 2006) of the Palaepaphos Urban Landscape Project (PULP for short) and, currently, the principal investigator of a Leventis Research Programme (2017-2019) entitled, “From the metalliferous sources to the citadel complex of Ancient Paphos: archaeo-environmental analysis of the mining and the built environment” (MEANING for short).

Her research interests are: Mediterranean island cultures; urbanism and state formation; the archaeology of migration/colonization in the Mediterranean; landscape studies and political economies. She is a strong advocate of “Cyprocentricism” as a methodological approach that relies primarily on the analysis of data from the different geomorphological regions of the island for the interpretation of Cyprus’s socio-cultural development since prehistory.