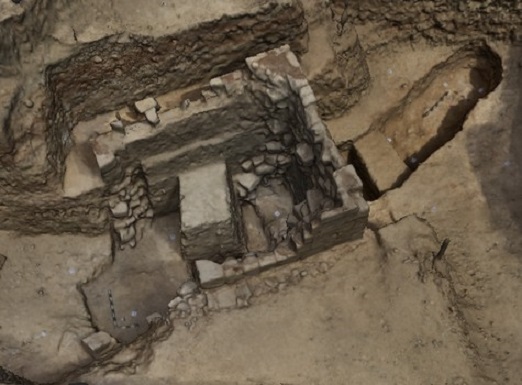 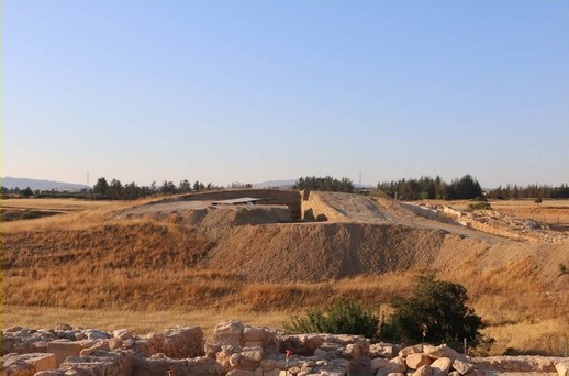 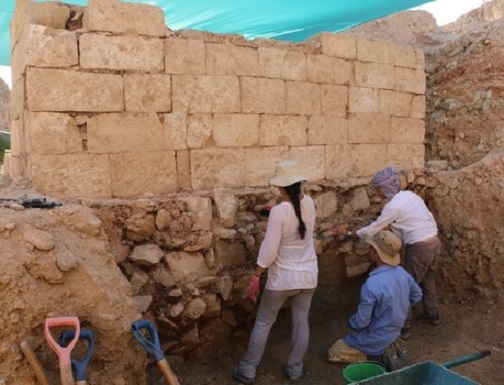 Excavations of The University of Cyprus at the Laona tumulus

The Department of Antiquities, Ministry of Transport, Communications and Works has announced the completion of the University of Cyprus annual field campaign on the tumulus of Laona at Palaepaphos which took place in June and September and lasted four weeks. The Laona tumulus is monumental in size (100m. x 60m. x 10m.) and as such remains unique in Cyprus to this day. The man-made mound was identified for the first time in 2012 in the context of the Palaepaphos Urban Landscape project carried out by Professor Maria Iacovou of the Department of History and Archaeology since 2006.

The low hillock of Laona, on which the tumulus was raised, lies at a distance of one kilometer to the east of the sanctuary of Aphrodite from where it is clearly visible. At the beginning of the 5th century BC, the royal dynasty of the city-state of Ancient Paphos implemented an ambitious building programme on the plateau of Hadjiabdoulla, where a royal residence and an extensive economic complex were constructed.

At the same time, 70m north of the Hadjiabdoulla citadel, they had a monumental rampart built on Laona. Over 65 m. of the rampart have now been revealed on the east side of the hill. This impressive defensive project of the Cypro-Classical period was buried under 13.700 cubic meters of marl and red soil, which had been transported for the construction of the tumulus. The Laona fortress was, therefore, well preserved under the tumulus; its NE corner survives to a height of six meters, and this makes it one of the most significant monuments of the “Age of the Cypriot Kingdoms”.

The ceramic evidence suggests that the construction of the mound dates to the third century BC. Since 2013, the excavations are concentrated in the SE quarter. About 12m south of the summit, which rises to 114 above sea level, the UC team found at a depth of over six meters a small square (4mx4m) monument. Although its east wall stands to a height of 3,5m, the building was already half destroyed when the mound was constructed. It has a foundation ledge made of unworked stones and red clay. However, there is no relation between the external and internal building plan of the monument; the only part that would have been visible above ground are the external walls made of worked blocks.

The completion of the investigation has established that this peculiar monument was not made for internal use. It contained no objects and no burial chamber. The stone walls formed a shell around a solid homogeneous filling made of worked marl. The preparation of the marl must have taken place in a long channel cut to the east, which communicates with the center of the foundation ledge.

The mystery of the absence of the west wall was solved when the research team identified on the south section of the mound that had covered the building a man-made cutting terminating where the west wall was meant to be. The cutting was subsequently “mended” with a different type of soil. The west wall was thoroughly destroyed down to its foundation base, which rests on bedrock. There is little doubt that this was the work of ancient tomb robbers. They expected to loot a burial chamber but, apparently, they had relied on the untrustworthy information or assumption.  Maybe this was the main role of the small building: to divert attention away from the position of the burial chamber. Looted or not, the burial chamber or the cenotaph, in the name of which the tumulus of Laona was raised, continuous to evade ditection.

The Department of Antiquities of Cyprus has reburied the foundation ledge on the east side and has installed a protective cover over the monument as a temporary preservation measure against weather conditions. The excavations on Laona will be resumed in the summer of 2019; the goal will be the north and north-west contour of the Cypro-Classical rampart.