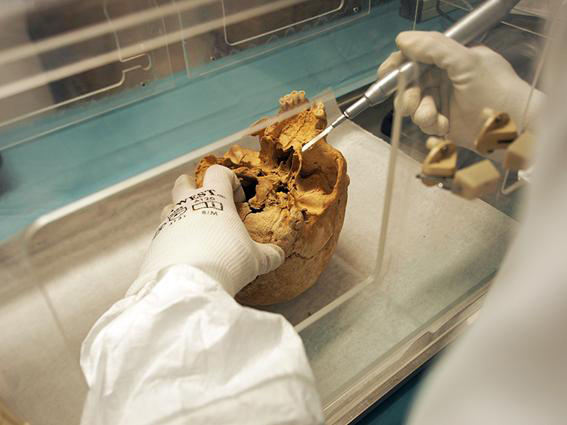 Neolithic farmers coexisted with hunter-gatherers for centuries in Europe

New research answers a long-debated question among anthropologists, archaeologists and geneticists: when farmers first arrived in Europe, how did they interact with existing hunter-gatherer groups?

The Neolithic transition–the shift from a hunter-gatherer to a farming lifestyle that started nearly 10,000 years ago–has been a slowly unraveling mystery. Recent studies of ancient DNA have revealed that the spread of farming across Europe was not merely the result of a transfer of ideas, but that expanding farmers from the Near East brought this knowledge with them as they spread across the continent.

Numerous studies have shown that early farmers from all over Europe, such as the Iberian Peninsula, southern Scandinavia and central Europe, all shared a common origin in the Near East. This was initially an unexpected finding given the diversity of prehistoric cultures and the diverse environments in Europe. Interestingly, early farmers also show various amounts of hunter-gatherer ancestry, which had previously not been analyzed in detail.

The current study, from an international team including scientists from Harvard Medical School, the Hungarian Academy of Sciences and the Max Planck Institute for the Science of Human History, focused on the regional interactions between early farmers and late hunter-gatherer groups across a broad timespan in three locations in Europe: the Iberian Peninsula in the West, the Middle-Elbe-Saale region in north-central Europe, and the fertile lands of the Carpathian Basin (centered in what is now Hungary). The researchers used high-resolution genotyping methods to analyze the genomes of 180 early farmers, 130 of whom are newly reported in this study, from the period of 6000-2200 BC to explore the population dynamics during this period.

“We find that the hunter-gatherer admixture varied locally but more importantly differed widely between the three main regions,” says Mark Lipson, a researcher in the Department of Genetics at Harvard Medical School and co-first author of the paper. “This means that local hunter-gatherers were slowly but steadily integrated into early farming communities.”

The team also investigated the relative length of time elapsed since the integration events between the populations, using cutting-edge statistical techniques that focus on the breakdown of DNA blocks inherited from a single individual. The method allows scientists to estimate when the populations mixed. Specifically, the team looked at 90 individuals from the Carpathian Basin who lived close in time. The results–which indicate ongoing population transformation and mixture–allowed the team to build the first quantitative model of interactions between hunter-gatherer and farmer groups.

“We found that the most probable scenario is an initial, small-scale, admixture pulse between the two populations that was followed by continuous gene flow over many centuries,” says senior lead author David Reich, professor of Genetics at Harvard Medical School.

These results reflect the importance of building thorough, detailed databases of genetic information over time and space, and suggest that a similar approach should be equally revealing elsewhere in the world.