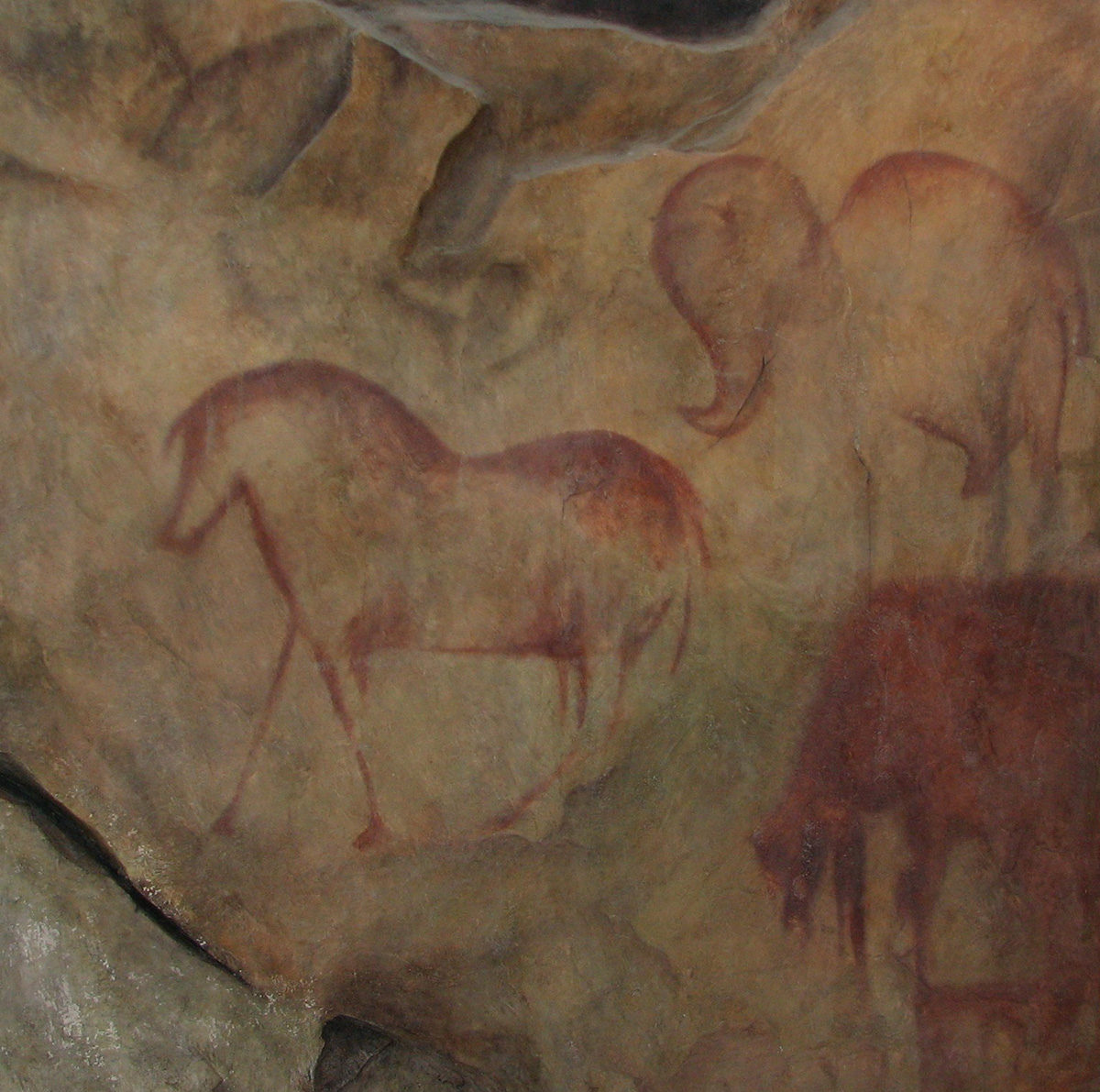 In the Kapova Cave

An ancient image of a two-humped camel has been discovered in the Kapova cave (Southern Urals). The age of the painting is preliminarily estimated to be between 14,500 and 37,700 years, a time when there were no camels in the Southern Urals. This discovery confirms researchers’ belief that artists in the Upper Paleolithic could migrate over long distances.

The image of a camel’s shape is painted in red ochre and partially outlined with charcoal. This unique discovery was made by Eudald Guillamet, a well-known restorative specialist from Andorra, who was invited by the State Office of Protection of Cultural Heritage of Bashkiria to clean the cave of graffiti.

“This painting, cleared on the polychrome panel “Horses and Signs,” which has been well-known since the late 1970s, has no analogues in the art complexes of the caves of France and Spain, but does have some resemblance to the camel painting from the Ignatievskaya cave. Now it will probably become a significant image in the Upper Paleolithic cave bestiary of the Southern Urals,” comments V.S. Zhitenev, head of Moscow State University’s South Ural archeological expedition and leading researcher for the Kapova and Ignatievskaya caves.
“The age of the drawings in this panel cannot be accurately established yet, but the results of uranium-thorium dating of the calcite deposits on which the image is painted, and which cover it, unambiguously show that the time period during which the drawing was made was during the Upper Paleolithic age, which is no earlier than 37,700 years ago and no later than 14,500 years ago. In the course of excavating the Kapova cave, only the upper layer of deposits with traces of activity of Paleolithic artists, about 17,000 – 19,000 years ago, has been dated so far,” concluded the scientist.

The artistic features and arrangement of the images, as well as the traces of human activity in the cave, show that the traditions of organization of underground sanctuaries in the Upper Paleolithic originated in the Franco-Cantabrian region. However, at such a distance from the main European cluster of cave sites with wall paintings, local specifics in the development of graphic traditions inevitably arose.
The long evolution of the traditions of cave art in the region is revealed by the fact that people living in the Southern Urals during the Ice Age painted not only the images of horses, bisons, mammoths, and woolly rhinoceroses that were widespread in European caves, but representations of the local fauna as well. Analysis of stone tools confirms the assumption.

“It is very significant that this camel vividly confirms the theory of the Volga-Caspian direction of the connections among the people who created the sanctuary in the Kapova cave. This direction was earlier grounded in the use of ornaments from fossil shells brought from the Caspian region. Moreover, this direction is very interesting in terms of a possible way that the traditions of creating cave sanctuaries with wall paintings could have been spread, if we consider the Carpathian caves with Ice Age wall paintings,” explains Vladislav Zhitenev. “Equally important, along with the discovery of the camel painting, is the fact that fragments of the shape of another animal, apparently a mammoth, were cleaned off. This is the first well-preserved painting of a woolly giant from the Ice Age on the middle level of the cave. Cleaning calcite off from the newly-discovered figures confirmed the theory of a significant similarity in the general structure of the visual panels, with leading images of horses, and large geometric shapes, in which one may see representations of animals. The similarity in the arrangement of vertical and horizontal figures (or rather, explicit compositions) on panels located on two different floors indicates a profound connection between the ideas expressed by the Paleolithic artists. The upper and middle levels are connected by a thirteen meter high vertical well.”

In December, archeologists from Moscow State University will continue researching Paleolithic art in the Kapova and Ignatievskaya caves. In winter, the walls of the underground halls and galleries are much drier than in the summer, which makes it easier to reveal the smallest details of the paintings. Monitoring of the state of the wall paintings will also continue, with the aim of studying the impact of dynamic factors of the underground environment on geochemical processes related to the destruction of wall paintings. It is carried out in a joint project with specialists from Shulgan-Tash Nature Reserve.

The Kapova cave is located in Bashkiria, 400 km away from Ufa, on the territory of Shulgan-Tash nature reserve. The cave is one of the most famous sites containing Paleolithic parietal art in Europe. Among the images depicted, one can come across such vivid representatives of mammoth fauna as wooly rhino, bison, horse, and, of course, the wooly mammoth itself. The wall paintings were created about 17 000 – 19 000 years ago. Figures of fish and a zooanthropomorhic figure (a mixomorph combining human and animal traits), rarely seen in European sites, are of special interest.

The principal array of images in the Kapova cave are unidentifiable spots of red pigment, which are partially blurred shapes, partly the remains of erased drawings, and partially traces of Paleolithic artistic activities of unknown origin. Some of the found traces of artistic activity are finger-painted lines, fingerprints and, possibly, prints of the lower part of the palm. The microstratigraphic position of the remains of intentionally erased images, above which the Paleolithic artist painted new animal shape and signs, has been revealed in some panels.