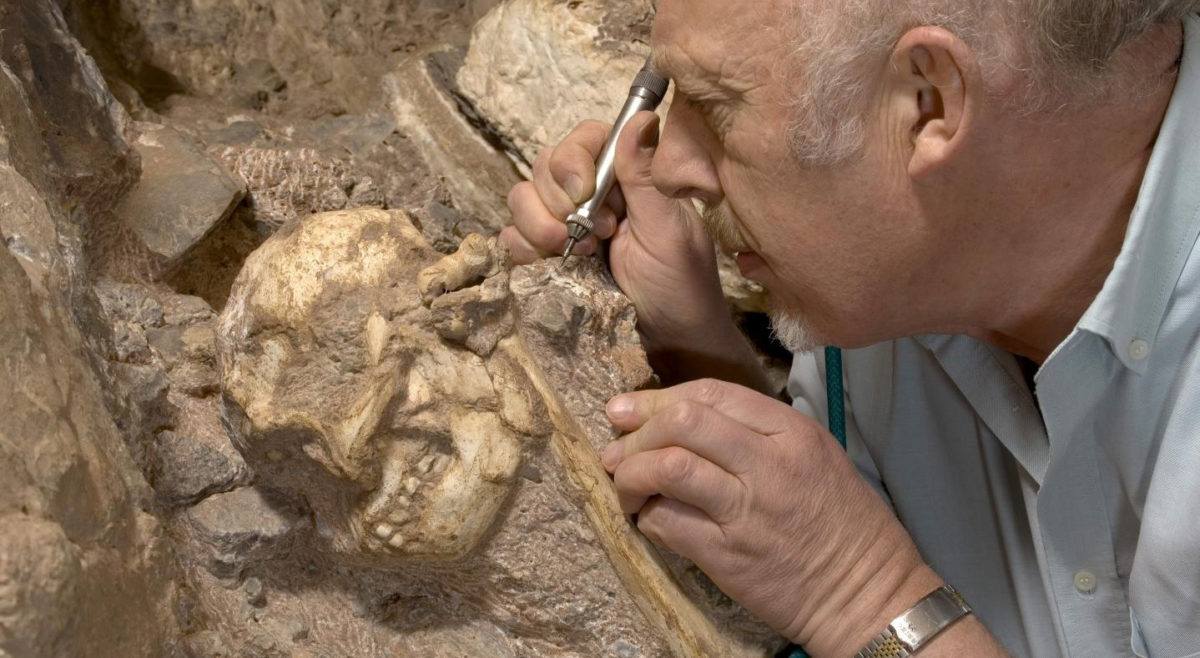 South Africa’s oldest, and the world’s most complete Australopithecus skeleton ever found

South Africa’s status as a major cradle in the African nursery of humankind has been reinforced with the unveiling of “Little Foot”, the country’s oldest, virtually complete fossil human ancestor.

Little Foot is the only known virtually complete Australopithecus fossil discovered to date. It is by far the most complete skeleton of a human ancestor older than 1.5 million years ever found. It is also the oldest fossil hominid in southern Africa, dating back 3.67 million years. The unveiling will be the first time that the completely cleaned and reconstructed skeleton can be viewed by the national and international media.

Discovered by Professor Ron Clarke from the Evolutionary Studies Institute at the University of the Witwatersrand in Johannesburg, South Africa, the fossil was given the nickname of “Little Foot” by Prof. Phillip Tobias, based on Clarke’s initial discovery of four small footbones. Its discovery is expected to add a wealth of knowledge about the appearance, full skeletal anatomy, limb lengths and locomotor abilities of one of the species of our early ancestral relatives.

“This is one of the most remarkable fossil discoveries made in the history of human origins research and it is a privilege to unveil a finding of this importance today,” says Clarke.

After lying undiscovered for more than 3.6 million years deep within the Sterkfontein caves about 40km north-west of Johannesburg, Clarke found several foot bones and lower leg bone fragments in 1994 and 1997 among other fossils that had been removed from rock blasted from the cave years earlier by lime miners. Clarke sent his assistants Stephen Motsumi and Nkwane Molefe into the deep underground cave to search for any possible broken bone surface that might fit with the bones he had discovered in boxes. Within two days of searching, they found such a contact, in July 1997.

Clarke realised soon after the discovery that they were on to something highly significant and started the specialised process of excavating the skeleton in the cave up through 2012, when the last visible elements were removed to the surface in blocks of breccia. “My assistants and I have worked on painstakingly cleaning the bones from breccia blocks and reconstructing the full skeleton until the present day,” says Clarke.

In the 20 years since the discovery, they have been hard at work to excavate and prepare the fossil. Now Clarke and a team of international experts are conducting a full set of scientific studies on it. The results of these studies are expected to be published in a series of scientific papers in high impact, peer reviewed international journals in the near future.

This is the first time that a virtually complete skeleton of a pre-human ancestor from a South African cave has been excavated in the place where it was fossilised.

“Many of the bones of the skeleton are fragile, yet they were all deeply embedded in a concrete-like rock called breccia,” Clarke explains.

“The process required extremely careful excavation in the dark environment of the cave. Once the upward-facing surfaces of the skeleton’s bones were exposed, the breccia in which their undersides were still embedded had to be carefully undercut and removed in blocks for further cleaning in the lab at Sterkfontein,” says Clarke.

The 20-year long period of excavation, cleaning, reconstruction, casting, and analysis of the skeleton has required a steady source of funding, which was provide by the Palaeontological Scientific Trust (PAST) – a Johannesburg-based NGO that promotes research, education and outreach in the sciences related to our origins. Among its many initiatives aimed at uplifting the origin sciences across Africa, PAST has been a major funder of research at Sterkfontein for over two decades.

Professor Adam Habib, Vice-Chancellor and Principal of the University of the Witwatersrand says: “This is a landmark achievement for the global scientific community and South Africa’s heritage. It is through important discoveries like Little Foot that we obtain a glimpse into our past which helps us to better understand our common humanity.”

PAST’s chief scientist Professor Robert Blumenschine labels the discovery a source of pride for all Africans. “Not only is Africa the storehouse of the ancient fossil heritage for people the world over, it was also the wellspring of everything that makes us human, including our technological prowess, our artistic ability, and our supreme intellect,” he says.

The scientific value of the find and much more will be unveiled in a series of papers that Prof Clarke and a team of international experts have been preparing, with many expected in the next year.