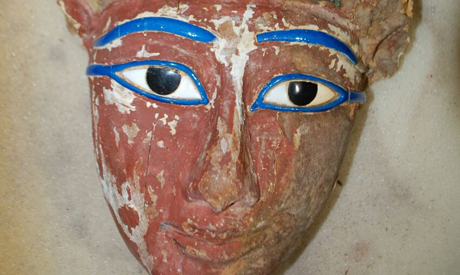 Belonging to two top officials from the New Kingdom

Antiquities Minister Khaled El-Enany is set to formally announce the discovery of two tombs at Draa Abul Naga in Luxor on Saturday, one bearing a painted wall. According to a source who requested anonymity, the tombs belong to two top officials from the New Kingdom (16th to 11th centuries BC); the mummy mask of one of the deceased was also discovered.

As the Ministry of Antiquities declares that year 2017 is the year of discoveries in Egypt, Minster of Antiquities Dr. Khalid El-Enany announced on Saturday December 9, 2017, the
discovery of a new tomb and the re-discovery of an older one at Draa Abul Naga necropolis on Luxor’s west bank.

Dr. Mostafa Waziri, Secretary-General of the Supreme Council of Antiquities and Head of Egyptian excavation mission explains that both tombs were given special numbers by German archaeologist “Frederica Kampp” during the 1990s.

It is located to the north of tomb No. TT225, and the tomb of city’s councilor Userhat (Kampp 157) uncovered in April. Although the name of the tomb’s owner is yet unidentified, the wall paintings, engravings and inscriptions found in the tomb suggest that it could be dated to the era between the reign of King Amenhotep II and the one of King Thutmose IV.

The owner of the tomb is yet unknown.

The tomb has a court lined with stone and mud-brick walls. It has a six meters deep burial shaft at its southern side that lead to four side chambers.
The tomb’s entrance is located at the eastern side with a sandstone façade without any inscriptions. It leads to a rectangular hall with a Niche. Studies reveal that the tomb was reused in antiquity.

All the inscriptions of the tomb are found on the western wall located at the tomb’s northern end. It shows two feast scenes. The first depicts a person, probably the deceased’s brother, presenting offerings and flowers to the deceased and his wife. The second scene is found below the first one and shows a number of guests standing in four rows among which a row consists of three men and three women. The first man in the row is the Keeper of the storeroom.

Most the items discovered inside the tomb are fragments of wooden coffins. The most important are: a large wooden mask which was originally a part of an Osirian coffin; a small painted wooden mask; a fragment of a gilded wooden mask in a bad condition of preservation, four legs for wooden chairs that were among the deceased funerary equipment. The lower part of a wooden Osirian shaped coffin decorated with a scene of goddess Isis lifting up her hands.

According to the cartouche of king Thutmosis I found engraved on the ceiling of one of the tomb’s chambers, it could be dated to the end of the 17th Dynasty and the beginning of the 18th Dynasty.

The tomb’s owner is unknown yet but there are two possibilities. The first suggests that the tomb could belong to a person named “Djehuty Mes” as his name was engraved on one of the walls. The second possibility sees that the owner could be the scribe “Maati” as his name and the name of his wife “Mehi” were inscribed on 50 funerary cones found in the tomb’s rectangular chamber.

The tomb has five eastern entrances that open on a rectangular hall partly damaged with two burial shafts. The first one is located at the northern side and the second is at the southern side. Another two chambers were found which one of which has a niche and two burial shafts of ten and seven meters deep. A burial of a woman named “Isis Nefret” was found. Studies suggest that it could be the mother of the tomb’s owner. Inside the burial
a wooden coffin painted with yellow and different ancient Egyptian scenes was found along with 36 Ushabti figurines. A very special ushabti depicting Isis Nefret in the form of Osiris is found. It is 60 cm tall and painted in white, red, green, blue, yellow and
black.

The tomb has only one inscription on one of its northern pillars. It shows a scene of a seated man offering food to four oxen, the first one is kneeling in front of the man who is giving it herbs. The scene also depicts five people while fabricating funerary furniture. The entrance of the long hall inscribed with remains of hieroglyphic text with the name of “Djehuty Mes.” The ceiling of the chamber is inscribed with remains of hieroglyphic inscriptions and the cartouche of King Thutmose I.

The artifacts discovered inside the tomb: 100 funerary cones;l painted wooden funerary masks; a collection of 450 statues carved in different materials such as clay, wood and faience; a small box in the shape of a wooden coffin with a lid, probably used for storing an Ushabti figurine of17 cm tall and 6 cm large; a collection of clay vessels with different shapes and sizes; a mummy wrapped in linen where its hands are on its chest in the Osirian form. The mummy was found inside the long chamber. Studies suggest that the mummy could be for a top official or a powerful person.