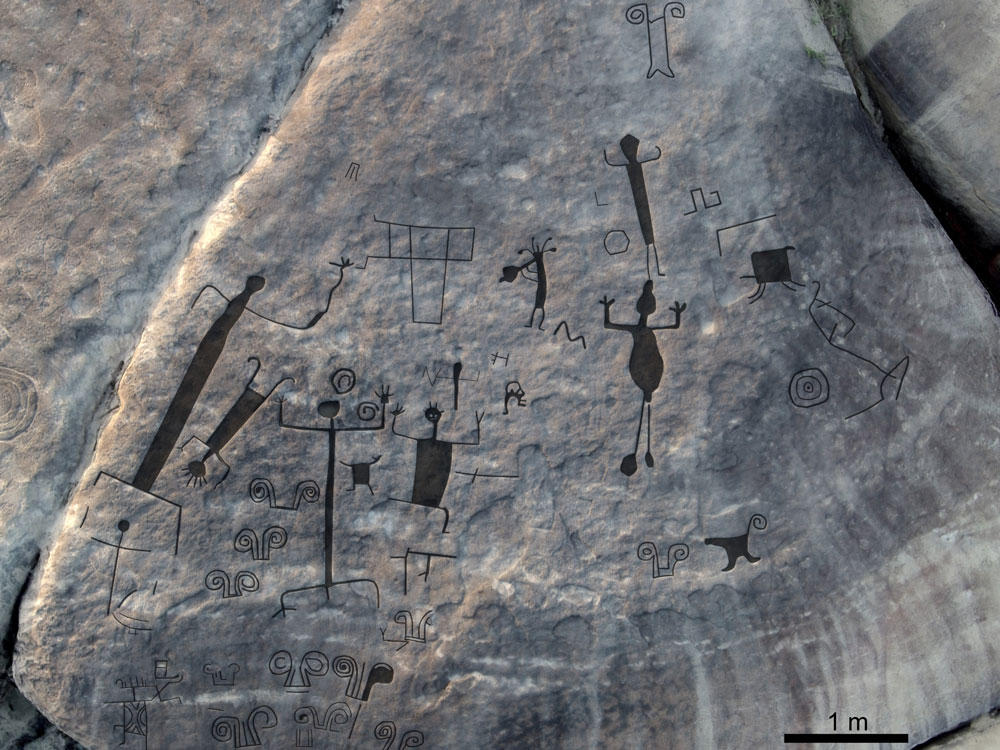 Rock engravings located in Western Venezuela – including some of the largest recorded anywhere in the world – have been mapped in unprecedented detail by UCL researchers.

The engravings (petroglyphs), some of which are thought to be up to 2,000 years old, include depictions of animals, humans and cultural rituals. One panel is 304m² containing at least 93 individual engravings, the largest of which measure several metres across. Another engraving of a horned snake measures more than 30 metres in length.

All the rock art surveyed is located in the Atures Rapids (Raudales de Atures) area of Amazonas state in Venezuela, historically reported as the home of the native Adoles by Jesuit priests. Eight groups of engraved rock art were recorded on five islands within the Rapids.

Drone technology was used to photograph the engravings, some of which are in highly inaccessible areas. Historically low water levels in the Orinoco River at the time the research was carried out also meant more of the engravings were exposed.

The paper’s author Dr Philip Riris (UCL Institute of Archaeology) said: “The Rapids are an ethnic, linguistic and cultural convergence zone. The motifs documented here display similarities to several other rock art sites in the locality, as well as in Brazil, Colombia, and much further afield. This is one of the first in-depth studies to show the extent and depth of cultural connections to other areas of northern South America in pre-Columbian and Colonial times.

“While painted rock art is mainly associated with remote funerary sites, these engravings are embedded in the everyday – how people lived and travelled in the region, the importance of aquatic resources and the seasonal rhythmic rising and falling of the water. The size of some of the individual engravings is quite extraordinary.”

Pre-Columbian art has a long history of study by naturalists and scientists travelling the Orinoco, such as Alexander von Humboldt, and has been the subject of archaeological research in the region for over half a century.

Rock engravings of the Middle Orinoco River have been studied before, but never in this level of detail. The research therefore offers the opportunity for new insights into the archaeological and ethnographic context of the engravings.

Almost all of the engravings found in the Rapids are inundated and exposed to varying degrees by seasonally rising and falling water levels in the Orinoco. Depending on fluctuating upstream precipitation, the relative height of the river also varies annually by up to several metres during the extremes of both seasons.

In one panel surveyed, a motif of a flautist surrounded by other human figures probably depicts part of an indigenous rite of renewal. Performances conceivably coincided with the seasonal emergence of the engravings from the river just before the onset of the wet season, when the islands are more accessible and the harvest would take place.

The research is part of the Cotúa Island-Orinoco Reflexive Archaeology Project, funded by the Leverhulme Trust.

Principal Investigator, Dr José Oliver (UCL Institute of Archaeology), said: “Our project focuses on the archaeology of Cotúa Island and its immediate vicinity of the Atures Rapids. Available archaeological evidence suggests that traders from diverse and distant regions interacted in this area over the course of two millennia before European colonization. The project’s aim is to better understand these interactions.”

“Mapping the rock engravings represents a major step towards an enhanced understanding of the role of the Orinoco River in mediating the formation of pre-Conquest social networks throughout northern South America.”