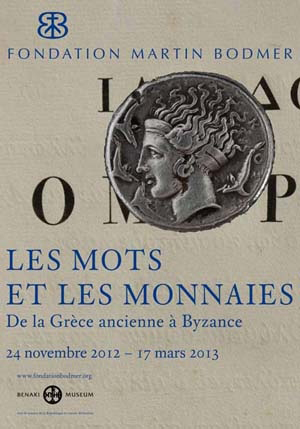 From Greece to Byzantium

An interesting exhibition opened last week in Geneva, organized jointly by the Benaki Museum of Athens and the Martin Bodmer Foundation. Showcasing coins from the 5th century BC to the 15th century AD, and texts the exhibition investigates the relations between stories and messages found on texts and coins. Both texts and coins “give form” to communication messages in past societies, words by expressing equivalent ideas, and coins by representing the value of equivalent goods. Both words and coins are being exchanged.

Copper coins are unassuming: they were not used to pay the tributes of the conquered, nor did they display the triumphs of the conquerors. They constantly changed hands in exchange for daily mundane goods and services. However, their beauty and naïve simplicity still impress today.

The coins were engraved with images of gods and lords, planets and cities as well as heroes and legends. By drawing parallels between these copper coins and texts of Western literature, the exhibition organized at the Bodmer Foundation raises some of the fundamental questions surreptitiously posed through the engravings on the coins. For example, how to affirm one’s identity yet still recognize differences; the link between what is sacred and faith; questioning personal limits and mortality; memorizing events; and the handing down of culture and values…

The exhibition invites visitors on a journey through space and time. The display features coins that portray twenty centuries of history,  – from the ‘invention’ of democracy in Greece, to the glory and decline of Byzantium.