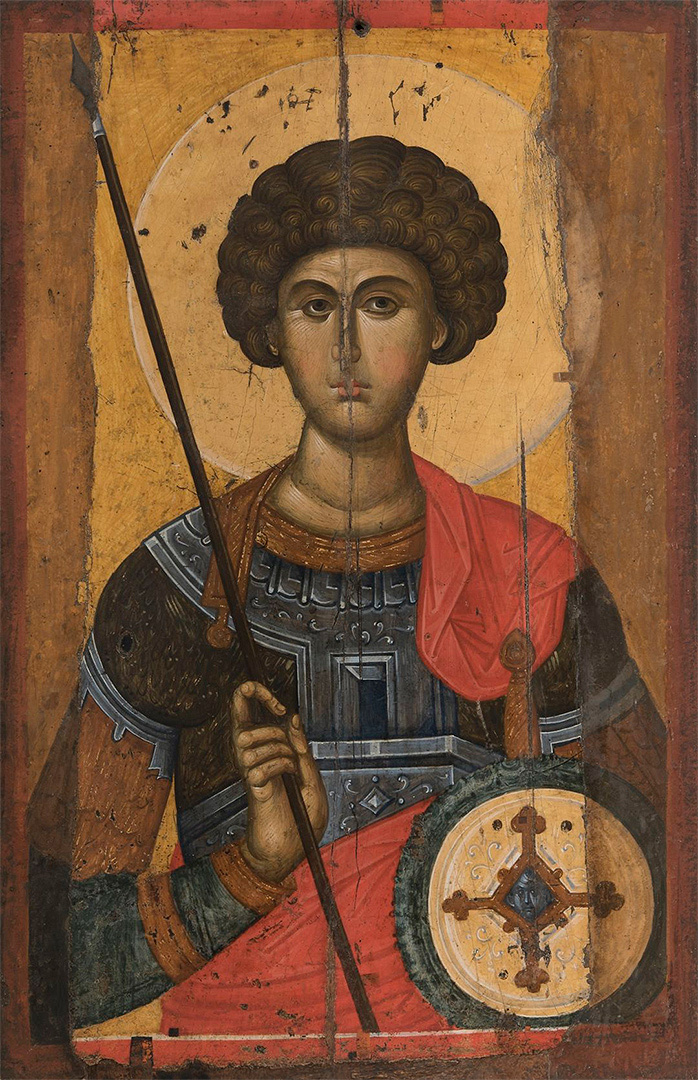 Byzantium through the Centuries

Exhibition at the State Hermitage

On 24 June 2016, as part of the Year of Greece in Russia and Russia in Greece 2016, the exhibition Byzantium through the Centuries opened in the State Hermitage as one of the main events of this cross-cultural year.

The exhibition has been organized by the State Hermitage and the Ministry of Culture and Sports of the Hellenic Republic.

The items included in the exhibition span the whole lifetime of Byzantine culture, from the early centuries to the fall of Constantinople to the Turks in 1453. They comprise sculpture; fragments of floor and wall mosaics; fragments of frescoes; bronze liturgical vessels; gold jewellery; cloisonné enamels; a unique two-metre 13th-century Shroud of Christ from Thessaloniki; illuminated manuscripts of the 10th-15th centuries, many of which are famous examples featured in books; and, of course, painted icons of the 12th to mid-15th centuries, supplemented by a unique mosaic Virgin Episkepsis.

Museums, libraries and monasteries in Athens, Thessaloniki, Kastoria, Veria, Corinth, Sparta, Rhodes, Argos, Chalcis, Boeotia, Serres, Lesbos and the Cyclades have provided items for display in St Petersburg. Never before has such a representative delegation of Byzantine “fine art” come to Russia from Greece.

The main aim of the exhibition is to draw particular attention to the aesthetics, artistic style, beauty and harmony of Byzantine art; to show its Hellenistic origins, not only through sculpture and monumental painting, but also through works of jewellery.

Byzantium acknowledged and used icons created in various techniques and materials: painted; chased in gold, silver and copper, often with gilding; carved from marble, ivory, soapstone or wood; created with cloisonné enamel on a gold, silver or occasionally copper base; made from minute semiprecious stones and gilded silver plaques.

The icon travelled a difficult and painful course in Orthodox Christian culture, a course of searchings, heresies, the establishment of theological and iconographic canons. The iconographic canon restricted an artist quite severely in the development of the subject line, directing his creative energy into the sphere of means of expression. At the same time, within the bounds of a single iconographic canon, we do not find identical icons, we do not see “copies of a copy”. Each image is individual, filled with its own aesthetic beauty; each stirs the soul, issuing a summons to perfection, goodness and faith.

The State Hermitage possesses one of the finest collections of Byzantine icons of the 7th-15th centuries. One of the rare pieces in the Hermitage collection is a 12th-century icon of the Transfiguration with a red ground that was an element of an epistyle. The icon was a part of a single Festivals row painted on a long chestnut-wood panel, later sawn into separate scenes. A few icons from this complex have survived: two are in the Monastery of Vatopedi on Mount Athos; another, The Raising of Lazarus, is in the Byzantine Museum in Athens. Visitors to the exhibition will have the unique opportunity to see the Athens and Petersburg icons together.

Constantinople’s wealth of remarkable works of Antiquity undoubtedly played an important positive role in the formation of the city’s refined artistic style. From all corners of the empire, and even from Rome itself, masterpieces were transported to the shores of the Bosphorus. Marble and bronze sculptures, busts, columns and obelisks flooded into the new capital. The Byzantines lived surrounded by great works of ancient plastic art, to which they quickly became accustomed, quite calmly accepting their “pagan origin” and “naked shamelessness”. Fairly often, though, especially in the provinces, people treated the legacy of Antiquity in a very simple manner: they would carve a cross on the forehead of a marble idol, thus sanctifying it and stripping the pagan deity of its power and authority. That is just what was done with the faces of Aphrodite and a boy from the 1st century AD from Athens included in the exhibition. While the finely engraved cross on the boy’s forehead was added with great sensitivity and tact, the face of the goddess of love suffered considerably. One more example of such Christianisation and re-use can be found in the Hermitage collection: the wall of a child’s sarcophagus carrying circus scenes was hallowed by a large Greek cross on the reverse.

The Christianization extended not only to idols and marble slabs, but also to works of applied art. Examples are a bronze figure of Harpocrates (a fragment of a candelabrum or thymiaterion – incense burner) from the Hermitage collection and especially miniature precious cameos, where a skilled carver easily turned the emperor Caracalla into Saint Peter and a Roman matron into a young Christ Emmanuel. Such transformations of precious items were, of course, only possible in the capital or major urban centres. It was also considered that the removal of pagan sculptures or altars from temples to other places “unbefitting a deity” would deprive them of their magical power. Consequently, the statues of Greek and Roman gods on the streets and in the buildings of Constantinople and other cities of the Eastern Roman Empire were no longer perceived as idols, but as decorative features. Admittedly, at the same time, a belief in the power and magic of the pagan deities quite often endured in the mass consciousness, coming to the fore at moments of need. Sadly, few of the ancient sculptures that were once in the Byzantine capital have survived.

The art of producing durable and attractive mosaic floors was much in demand among the aristocracy of Byzantium. The floors of villas, even those located on the islands or regions remote from the capital, were made from colourful mosaics. The seasons, months, heavenly bodies, circus and hunting scenes, Orpheus, Apollo and the muses, portraits of famous poets made up the usual repertoire of early Byzantine mosaic floors. Quite often floors with plant and geometric ornamentation, birds and animals, and even narrative subjects, also featured Christian churches. One such floor mosaic from the 6th century, found in Chersonesus, the Byzantine polis in the Crimea, was brought to St Petersburg in 1853 and installed in the Athens Hall of the Imperial Hermitage (now Hall 112).

The exhibition includes parts of several different floors of this type. One large fragment depicts Autumn in the form of a full-length female figure moving with a slight dancing step and holding a cloth filled with fruit. This mosaic comes from Argos and dates from the 4th century.

The proclamation of Christianity as the official religion of the Eastern Roman Empire had no great impact on women’s love of expensive adornments that Christian authors declared to be attributes of evil and a low vice. In the jewellery of the early Christian period (1st–5th centuries), the general tendencies in shape and decoration remained fairly conservative over several centuries, while there was an astonishing variety in the details. The fashion was for both pure gold articles and those with inset precious stones and pearls, with the shape of the stones being as close as possible to that provided by nature.  The range of techniques employed was also large: casting, chasing, stamping, raising, wirework, granulation (and false granulation), filigree and cold inlay. In the 9th–10th centuries cloisonné enamel was added to this arsenal.

A striking chronological dissonance among the Byzantine icons, mosaics and frescoes is sounded by the late 16th-century painting of The Apostle Peter by El Greco that reflects the unfading genius of the Humanistic Byzantine legacy. It is not for nothing that people speak of El Greco as the last Byzantine artist and the last Byzantine Humanist.

The exhibition is accompanied by printed publications, explications and special films about Byzantium and the museums in the information zone.

The exhibition curator is Yuri Alexandrovich Pyatnitsky, senior researcher of the Byzantium and Middle East Sector of the State Hermitage’s Department of the East.

An illustrated scholarly publication in Russian has been prepared for the exhibition (Art of Miraculous Beauty and Spirituality; State Hermitage Publishing House, 2016) with text by Yuri Pyatnitsky.

The exhibition will run through October 2, 2016.