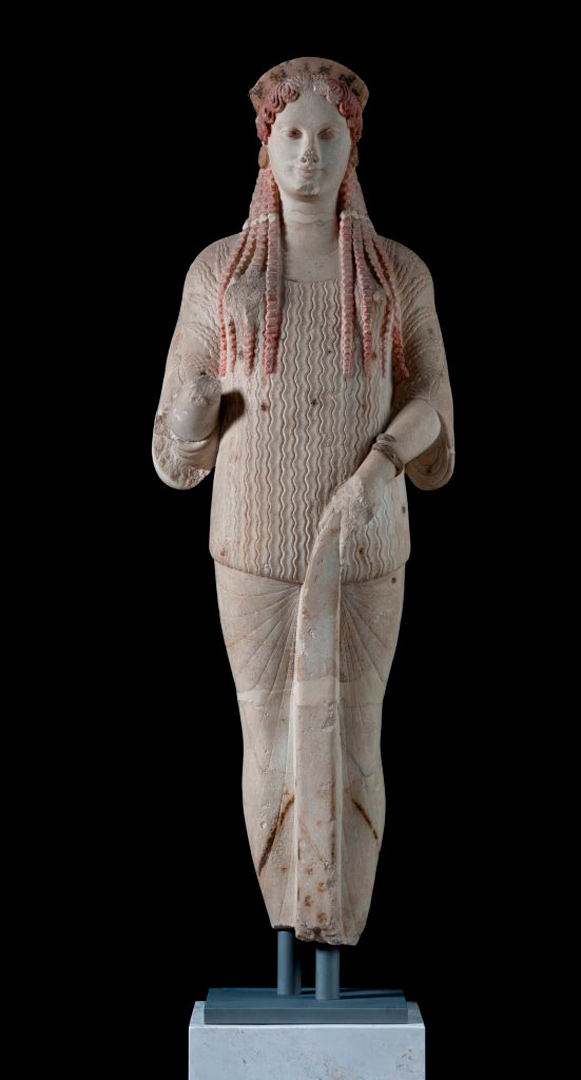 A Kore in the Hermitage Museum

Exhibition of an Ancient Greek sculpture from the Acropolis Museum

The Acropolis Museum is one of the most visited museums in Greece. Among the museum’s world-renowned exhibits are sculptures that adorned the Parthenon, Erechtheion and the Temple of the Goddess Nike, as well as votive statues, among which are the archaic korai.

An Archaic statue of a kore has never been exhibited before in the Hermitage and this is the first time that this particular sculpture has left the Acropolis Museum.

Presented in the Roman Courtyard (Hall 108), the marble statue of the kore created by an Attic sculptor in 520–510 BC. The kore was found in 1886 on the Athenian Acropolis, close to the Erechtheion.

The earliest known statues of korai date from the 7th century BC, but archaic sculpture reached its true peak in Athens from the late 6th to early 5th century BC.  The statues of korai found on the Acropolis had a votive function, being dedicated to the Temple of Athena and erected as a gift to the goddess: today they are known as “the daughters of the Acropolis”. In total around 200 sculptures depicting maidens in the bloom of youth have been found on the Acropolis. The korai differ in size, facial features and details of hairstyle and clothing, but all the sculptures belong to a single type of statuary, with the figure presented in a strongly frontal manner. The pose and composition of the statues continued the Ancient Egyptian tradition, which was, however, completely rethought by the Greek sculptors of the Archaic period, who breathed life into the static forms of eastern sculpture.

As a rule, the korai are holding out some offering to the goddess – a pomegranate, wreath or bird, while their other hand grasps the hem of their clothing. The maidens are dressed in an Ionian chiton, with its thin fabric following the curves of the female body.  The statue of a kore presented in the exhibition stands out for the distinctive manner in which the clothing is depicted: the Ionian chiton is gathered with a belt in its upper part, forming an overlap at the waist, while a broad decorative edging descends along the line of the legs. The kore’s head is adorned by a diadem that retains depictions of lotus flowers and rosettes; earrings are shown on her earlobes and a bracelet on her arm. The chiton is covered with a depiction of little stars. A red meander pattern adorns its edging. Traces of painting remain on the face and hair.  The young maiden’s narrow almond eyes radiate joy; her lips are turned up in the “Archaic smile”.  This facial expression, characteristic of sculpture from the period, is customarily taken to convey gratitude to the goddess.

The exhibition’s curator is Anna A. Trofimova, head of the State Hermitage’s Department of the Ancient World, and Stamatia Eleftheratou, head of the Acropolis Museum’s Permanent Exhibition Department.