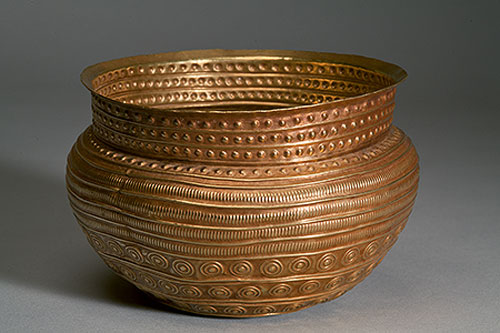 Opening overshadowed by a diplomatic row between Germany and Russia

The exhibition Bronze Age. Europe without borders. Fourth-first millenia BC opened last Friday on June 21st. The exhibition is one of the most important museum and research projects of Russia and Germany in 2009-2013 and it closes the Year of Germany in Russia. However, the event of the grand opening has been overshadowed by a diplomatic row between Germany and Russia, with Moscow objecting to Angela Merkel’s plan to use her speech to refer to hundreds of German works of art looted by Red Army soldiers after the war.

One of the highlights of the exhibition is the Eberswalde Hoard, which consists of 81 ancient gold pieces including plates, rings and ornate bowls that has not been seen in public since the end of the war. The hoard, discovered during an excavation of north-east of Berlin in 1913, was removed from a museum in the German capital by Soviet troops and transported to Moscow as war booty. According to George Streiter, the German government spokesman, the German chancellor had planned to use her speech to call for the return of the art in accordance with international law. Mr Streiter said Russia had cancelled the opening speeches, blaming time constraints, which prompted outrage in the German media.

An hour before the exhibition was due to open, the two leaders announced they would indeed attend but there would be no joint opening and Merkel’s speech had been cancelled.

For decades, Germany has demanded the return of the Eberswalde Hoard, regarded as one of the most important discoveries from the European Bronze Age. Russia has declined to return the artefacts, regarding their seizure as part of reparations for the damage inflicted during Hitler’s invasion of the Soviet Union.

“I think this is a very sensitive question… So if we want any progress, we should not blow the problem out of proportion but seek ways to solve it. Probably we should not start a discussion now because people will appear on the Russian side who would evaluate the damage done to our art during World War Two,” Mr. Putin said.

The exhibition has been jointly organised by Russian and German museums, who donated more than 1,700 objects to create a portrait of the Bronze Age.

According to the State Hermitage Museum Press Release: “Bronze Age. Europe without borders. Fourth-first millenia BC is the first exhibition, which presents Russian visitors all stages of cultural development into the bronze epoch from the coast of the Atlantic Ocean and till the Urals, stages of European cultures formation – the future European unity. For the Russian researchers this project is a chance to study Western European and Middle European materials together with German colleagues, and for the German scientists, it is a possibility to get acquainted with materials of steppe and forest steppe cultures of the Eastern Europe, as well as to disclose intercultural connections and borrowings. And for the wide audience, it is an opportunity to discover ;first all European epoch’, development of cultures of different peoples at the territory of Europe during the Bronze century for the first time. (…) West European materials of the exposition are represented from so-called transferred collections, which came to the Soviet storages as a result of the Second World war from the Museum of Prehistory and Ancient History of the State Berlin Museums”.

The exhibition runs until September 8, 2013.