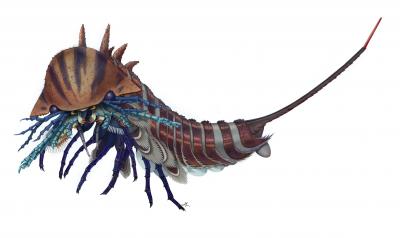 A 508-million-year-old sea predator with a ‘jackknife’ head

Paleontologists at the University of Toronto and the Royal Ontario Museum (ROM) in Toronto have entirely revisited a tiny yet exceptionally fierce ancient sea creature called Habelia optata that has confounded scientists since it was first discovered more than a century ago.

The research by lead author Cédric Aria, recent graduate of the PhD program in the department of ecology & evolutionary biology in the Faculty of Arts & Science at U of T, and co-author Jean-Bernard Caron, senior curator of invertebrate palaeontology at the ROM and an associate professor in the departments of ecology & evolutionary biology and Earth sciences at University of Toronto, is published today in BMC Evolutionary Biology.

Approximately 2 cm in length with a tail as long as the rest of its body, the long-extinct Habelia optata belongs to the group of invertebrate animals called arthropods, which also includes such familiar creatures as spiders, insects, lobsters and crabs. It lived during the middle Cambrian period approximately 508 million years ago and comes from the renowned Burgess Shale fossil deposit in British Columbia. Habelia optata was part of the “Cambrian explosion,” a period of rapid evolutionary change when most major animal groups first emerged in the fossil record.

Like all arthropods, Habelia optata features a segmented body with external skeleton and jointed limbs. What remained unclear for decades, however, was the main sub-group of arthropods to which Habelia belonged. Early studies had mentioned mandibulates — a hyperdiverse lineage whose members possess antennae and a pair of specialized appendages known as mandibles, usually used to grasp, squeeze and crush their food. But Habelia was later left as one of the typically unresolved arthropods of the Burgess Shale.

The new analysis by the University of Toronto-ROM researchers suggests that Habelia optata was instead a close relative of the ancestor of all chelicerates, the other sub-group of arthropods living today, named for the presence of appendages called chelicerae in front of the mouth and used to cut food. This is mostly due to the overall anatomy of the head in Habelia, and the presence of two small chelicerae-like appendages revealed in these fossils.

“Habelia now shows in great detail the body architecture from which chelicerates emerged, which allows us to solve some long-standing questions,” said Aria, who is now a post-doctoral researcher at the Nanjing Institute of Geology and Palaeontology, in China. “We can now explain why, for instance, horseshoe crabs have a reduced pair of limbs — the chilaria — at the back of their heads. Those are relics of fully-formed appendages, as chelicerates seem to originally have had heads with no less than seven pairs of limbs.”

Aria and Caron analyzed 41 specimens in total, the majority of which are new specimens acquired by ROM-led fieldwork parties to the Burgess Shale.

The research illustrates that the well-armoured body of Habelia optata, covered in a multitude of different spines, was divided into head, thorax and post-thorax, all bearing different types of appendages. The thorax displays five pairs of walking legs, while the post-thorax houses rounded appendages likely used in respiration.

“Scorpions and the now-extinct sea scorpions are also chelicerates with bodies divided into three distinct regions,” Aria explained. “We think that these regions broadly correspond to those of Habelia. But a major difference is that scorpions and sea scorpions, like all chelicerates, literally ‘walk on their heads,’ while Habelia still had walking appendages in its thorax.”

The researchers argue that this difference in anatomy allowed Habelia to evolve an especially complex head that makes this fossil species even more peculiar compared to known chelicerates. The head of Habelia contained a series of five appendages made of a large plate with teeth for mastication, a leg-like branch with stiff bristle-like spines for grasping, and an elongate, slender branch modified as a sensory or tactile appendage.

“This complex apparatus of appendages and jaws made Habelia an exceptionally fierce predator for its size,” said Aria. “It was likely both very mobile and efficient in tearing apart its preys.”

The surprising outcome of this study, despite the evolutionary relationship of Habelia with chelicerates, is that these unusual characteristics led instead the researchers to compare the head of Habelia with that of mandibulates from a functional perspective. Thus, the peculiar sensory branches may have been used in a similar fashion as mandibulates use antennae. Also, the overlapping plate-like appendages in the middle series of five are shown to open and close parallel to the underside of the head – much as they do in mandibulates, especially those that feed on animals with hardened carapaces.

Lastly, a seventh pair of appendages at the back of the head seems to have fulfilled a function similar to that of “maxillipeds” — appendages in mandibulates that assist with the other head limbs in the processing of food. This broad correspondence in function rather than in evolutionary origin is called “convergence.”

“From an evolutionary point of view, Habelia is close to the point of divergence between chelicerates and mandibulates,” Aria said. “But its similarities with mandibulates are secondary modifications of features that were in part already chelicerate in nature. This suggests that chelicerates originated from species with a high structural variability.”

The researchers conclude from the outstanding head structure, as well as from well-developed walking legs, that Habelia optata and its relatives were active predators of the Cambrian sea floors, hunting for small shelly sea creatures, such as small trilobites–arthropods with hard, mineralized exoskeletons that were already very diverse and abundant during Cambrian times.

“This builds onto the importance of carapaces and shells for evolutionary change during the Cambrian explosion, and expands our understanding of ecosystems at this time, showing another level of predator-prey relationship and its determining impact on the rise of arthropods as we know them today,” said Caron, who was Aria’s PhD supervisor when the bulk of this research was completed.

“The appearance and spread of animals with shells are considered to be one of the defining characteristics of the Cambrian explosion, and Habelia contributes to illustrate how important this ecological factor was for the early diversification of chelicerates and arthropods in general.”